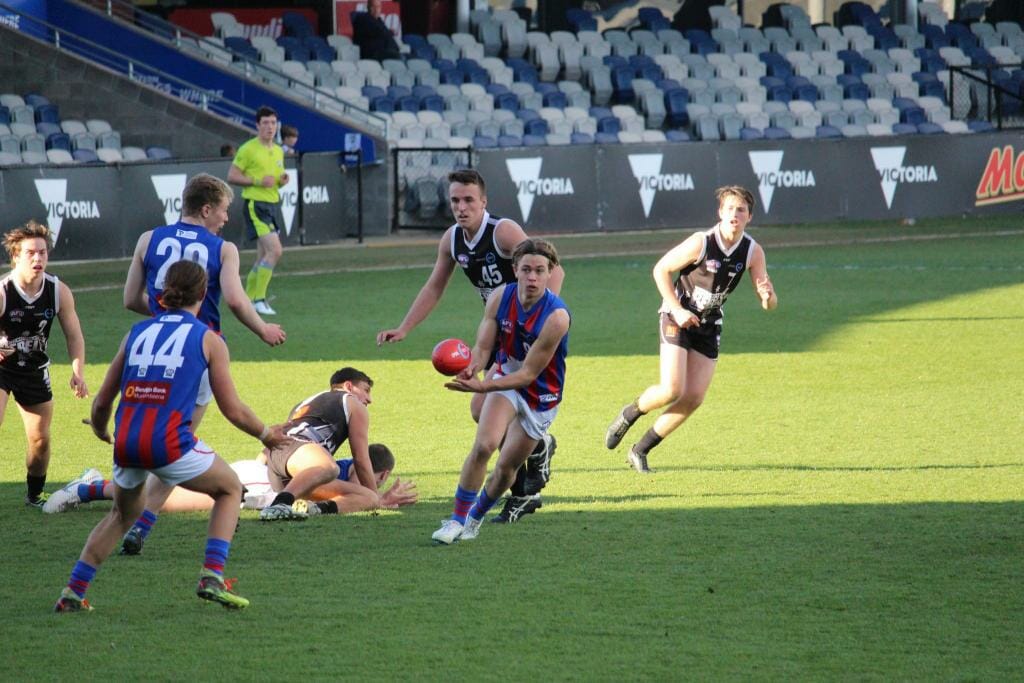 THE Swans came into the draft knowing they would have to match a very early bid for Academy product Nick Blakey, and did so with the forward taken at number 10. With somewhat of a gift under its belt, Sydney opted for some inside grunt and a couple of outside runners given the likes of Gary Rohan and Dan Hannebery departed during trade period. The Swans then rounded out their draft haul with three high-upside selections in their rookie and category-b slots.

The bid for Blakey was rumoured to have possibly come as early as pick five, but was eventually lodged at number 10 through GWS. Nonetheless, there was no way the Swans weren’t going to match whatever bid came for the promising key forward, who turned down father-son eligibility with both Brisbane and North Melbourne. In Blakey, the Swans get a readymade future replacement for Buddy Franklin in the key forward mould, with the potential for him to be unleashed further up the ground in any position. With clean hands both overhead and on the ground, Blakey is a prototypical forward with phenomenal pace for his size and enormous scope once he can build on his frame and gain even greater consistency.

Rowbottom is a safe bet at pick 25 as one of the best inside midfielders in the draft pool. The Oakleigh Chargers product is a hard tackler, and his average of 5.8 clearances per TAC Cup game was bettered only by seventh pick, Bailey Smith. As competitive as he is consistent, Rowbottom enjoyed a stellar season in Oakleigh and Vic Metro colours, and Sydney were pretty keen on snapping him up just outside of the first round – trading its future second round selection in order to do so. Readymade and solid as they come, Rowbottom could provide midfield depth from the get-go, while also being an apt future replacement for some of their ageing stars. As the nephew of Collingwood and Richmond champion Brian Taylor, he will undoubtedly be a commentator’s favourite.

Versatile Northern runner Justin McInerney was somewhat of a surprise selection as the first and only Knight off the board in the National Draft, but fits a clear need for the Swans on the outside. With the ability to provide damaging fold on the wing with his running power and penetrating kick, or cover off half-back with his strong overhead marking, McInerney is a high-upside improver at a good height who could come on strong in the future. While he is still raw and has room to improve in terms of consistency, McInerney has shown a competitive edge, apt work-rate and attitude for both the Knights and school side, Marcellin. He may well slot in nicely alongside the likes of Ryley Stoddart across half-back given his kicking efficiency, with Callum Mills set to spend more time in the midfield.

Dandenong premiership player Zac Foot is another prolific outside runner who has come on rapidly over the past year to storm into National Draft selection. Having been overlooked by the Stingrays in 2017 and playing locally with Langwarrin for the entirety of his bottom-age year, Foot fought his way back into the fold and eventually earned Vic Country representative honours. Foot’s strengths are clear to see, as he uses his elite coverage of the ground to both break the lines going forward and provide damaging pressure going the other way. Clean at ground level and with his kicking, Foot is an elite carrier of the football who can become a notable 100 meter player if he continues on his upward trend. Like McInerney, Foot also possesses the work-rate and attitude that the Swans always seem to be after, so will fit a need for his new side, twofold.

Having missed most of this year after rupturing his ACL, West Australian Durak Tucker is one who the Swans would have been glad to see slide under the radar. At pick 12 in the rookie draft, the Swans made another high-value, high-upside selection and will have been keen to hedge their bets on Tucker’s potential. A versatile intercepting defender, Tucker is strong overhead and covers the ground quickly – meaning he has the capability to cover both small and tall opponents. Given the steep rise of the likes of Luke Ryan as intercept mark machines down back, Sydney will hope that Tucker can quickly fit that mould and provide good fold for their best six defenders. Tucker has also by all accounts approached his rehab with vigour, so could be one who comes on quickly in his growth from a quite light-on prospect, and will inevitably have to prove his durability and match fitness over his first pre-season.

Sandringham’s Harry Reynolds is yet another prospect with high potential who came on quite quickly, quite late on. While he is raw and slight at this stage, Reynolds has a high ceiling on account of both his versatility and athletic base. Reynolds impressed towards the back end of the year after overcoming a range of injuries previously, providing plenty of run off half back at good pace and showcasing his potential for a move into the middle with impressive clearance work. His hands in-close are clean and efficient, but given his current status as more of a driving half-back, Reynolds will look to improve on his kicking efficiency (53 per cent in the TAC Cup) in order to become more damaging. With the Swans’ midfield stars heading towards the back-end of their careers, Reynolds is certainly one for the future who can build on his frame and hone his craft in the NEAFL before breaking through.

Having retired at the end of 2017, Tippett has been rookie listed in order to fulfil a financial settlement.

The Swans had a free shot here at an academy member, with Sam Wicks a product who impressed in the Academy Series but missed out on Allies selection. Wicks didn’t fret following the snub, putting in good showings for the Swans in the NEAFL and showing enough to warrant a Category B Rookie spot. A big-bodied utility, Wicks spent a good amount of time in the forward half, booting 12 goals across the season and earning a NEAFL rising star nomination. A low-risk pick, the Swans would not have hesitated in providing an opportunity to an academy product who has been there from the start.

The Swans approached the draft with an eye firmly focussed towards the future, building stocks in positions that need depth with high-upside selections late on that could provide huge value, but won’t hurt too much if they don’t work out. With ageing stars in the midfield and one particular prodigy looking a straight-swap up forward, Sydney look to be in a good position to challenge once again for finals in years to come.