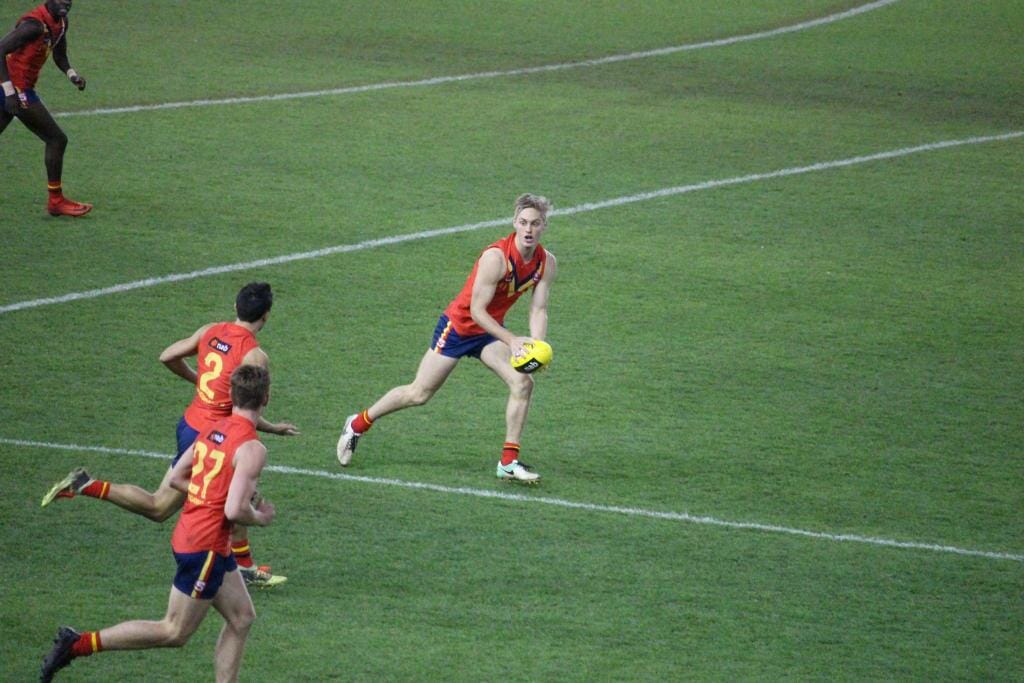 IF the GWS GIANTS were looking to build a strong culture and form the foundations of a future leadership group, then they nailed the 2018 AFL Draft. On night one, the GIANTS picked up the Vic Country co-captain, the Vic Metro captain, and one of the South Australian vice-captains, before calling out West Australian leader, Ian Hill early on day two.

With the GIANTS’ first selection in the National AFL Draft, they pounced on Vic Country co-captain and inside midfielder, Jye Caldwell. While he loves winning the ball at the coalface, Caldwell also has the athleticism, class and skill to hurt opposition sides on the outside as well. A natural born leader, Caldwell is a player who while he has had his troubles with injuries, will always contribute to the team. His upside is as high as anyone else in the draft, and could slot into a midfield role or up forward, or even down back if required such is the high calibre of his skills and speed.

A really consistent performer, Hately is underrated in this year’s draft despite being an AFL Academy member. He can win the ball on the inside or outside, go forward and kick goals or find space around the ground. He uses the ball well by hand or foot, extracts it out of a stoppage and can penetrate beyond 50m. Another natural leader, Hately is a readymade midfielder who has played senior football with Central District’s League side this year. With the midfielders lost to the GIANTS this off-season, Hately and Caldwell could both slot into that Dylan Shiel-Tom Scully dynamic.

An elite athlete, O’Halloran was chosen as Vic Metro’s captain ahead of a number of worthy players. His leadership speaks for itself, but his impact on the field is also as influential as any others. He has terrific speed, agility and endurance which makes him a damaging player around the ground. He was a surprise first round selection after not being invited to the draft, but was always around the mark and the GIANTS showed clear interest in the midfielder. He can also play forward and take contested grabs, with his goal sense quite impressive as well.

The second pick of the second day saw West Australian star, Ian Hill head west to the GIANTS after GWS traded up to secure the small forward/midfielder. He is class personified, and while his season has not been ideal, Hill has plenty of upside for the future. He rarely fumbles and loves to move the ball along a wing or inside 50. A keen goal sense and a natural nous when it comes to creativity, Hill can create something out of nothing. A touch of class to go with the inside ball-winning capabilities of the previous two picks.

The standout ruck prospect in the 2018 AFL National Draft ended up at his home in orange. Briggs is a 200cm ruck who had a standout season from start to finish, taking home the GWS GIANTS’ Most Valuable Player (MVP) and Allies’ MVP awards following the National Under 18 Championships. With the GIANTS losing Rory Lobb over the off-season, the inclusion of Briggs, and imminently Shane Mumford will add to the depth in that position. With a high endurance base and strong contested marking ability, Briggs looms as the natural successor in the role.

With their late selection in the draft, the GIANTS picked up tall defender, Connor Idun. The Falcons defender has played key position roles this season, but is more likely to be a third tall defender, who can also play forward if required. In his bottom-age year Idun also played through the midfield, with his defensive pressure and ability to stick to a task, important. He is still raw and developing, but a player who will fill a need in western Sydney.

The GWS GIANTS targeted midfielders with their first four picks, though most can play forward which gives them great versatility. Given their relative depth across most areas, the GIANTS were able to hit the draft with a notion of picking up ‘best available’, and added to the club’s growing bunch of leaders. Caldwell, Hately, O’Halloran and Hill were all leaders in some capacity for their respective states at the National Under 18 Championships, while Briggs and Idun add to the depth of the club, with Briggs the successor long-term to Mumford, and Idun able to play a multitude of roles.