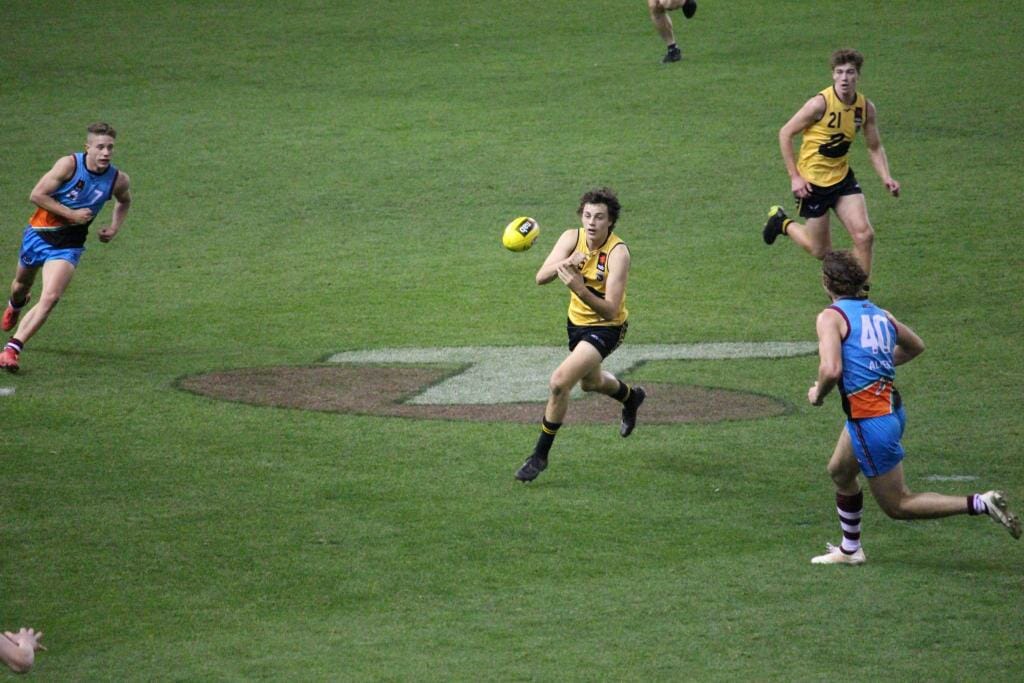 GEELONG addressed its need for outside run and pressure with its draft, while also strengthening its ruck stocks. The Cats used their first selection on a West Australian bolter, while picking up a Norwood pair, including a sliding outside midfielder. With a couple of rucks and a pressure forward added to the mix, as well as a household Geelong name, the Cats have a number of inclusions who will strengthen the depth and push for roles in 2019.

Clark was regarded as a potential top 10 pick, and had bolted from obscurity into the first round,  having received a draft night invitation.  With both Port Adelaide and GWS GIANTS keen, the aforementioned teams went for other players, allowing Geelong to pounce with their selection. Clark provides some speed off half-back and clean skills, which he can adapt to a midfield game down the track. A player who has developed rapidly in the second half of the season, he will be one the Cats look to develop into a key playmaker over the next few years.

There is a bit of a smaller type Mark Blicavs about Jarvis, in the sense that at the National Under 18 Championships, he chopped out in the ruck and rotated forward despite being just 188cm. He knows how to compete in a ruck stoppage and could be the next ‘Grigg’ who just relieves a number one ruck. While he did not get to taste action at League level in the SANFL given Norwood’s strength, Jarvis has plenty of athletic attributes that would have attracted the Cats to him. The big question is where does he play? Possibly as a third tall dynamic forward who takes ruck stoppages in the forward 50.

It is always a thrill when junior teammates manage to be reunited at the elite level, and both Jarvis and Kennerley are just that. They not only both played for Norwood in the SANFL Colts and Reserves, but they attended the same boarding school together. Now they catch the same flights to and from Adelaide to Kardinia Park. Kennerley is a skilful outside midfielder who was one of the sliders, and while still raw, like Clark offers good skills and outside run. He took out the 2km time trial, indicating his gut-running ability. He adds a different element to Geelong’s mix.

Hedging the bets with fellow South Australian, Jarvis, the Cats selected another ruck in Fort who is more likely to develop into a ruck, standing at 204cm. Originally from the Geelong Falcons having now spent three seasons at Central District, Fort became the number one ruck in the league. He will offer serious competition to the likes of Rhys Stanley and Zac Smith in an area that has long been Geelong’s achilles heel since the days of Brad Ottens. A readymade ruck who can slot straight into the side if needed.

Despite obtaining Gary Rohan and Luke Dahlhaus in the off-season, Geelong added another small forward to its ranks in Jake Tarca. The pressure forward missed out on initial selection in the South Australian side for the National Under 18 Championships, but was included by the final cut-off date. A long-term prospect, Tarca is one likely to lay plenty of tackles in the forward 50 and create turnovers and scoring opportunities.

Billy’s son made it to the Cattery without Geelong having to match a bid. The big-bodied inside midfielder is likely to play more forward than through the midfield, which might be ideal for the Cats. He’s an elite runner with clean hands and great vision, who just drifted to the back-end of the draft due to his speed. One of the smarter players inside 50, Brownless has no trouble pulling off the unbelievable with some highlight-reel worthy goals this season.

The Geelong Cats’ VFL side will be looking for a new skipper in 2019 after 2018 appointed leader,  Tom Atkins was called up to the senior side in the rookie draft. After a magnificent season which included a ridiculous 23 tackles in one game, the hard-nosed midfielder finally got his reward for effort with the Cats’ only selection in the rookie draft. A readymade midfielder, he will provide support to the midfield and enable the likes of Patrick Dangerfield and Gary Ablett to spend more time forward.

Geelong chose to nominate local talent, Schlensog prior to the draft and added him to the Cats’ list. The developing tall has mixed between ruck and up forward, and despite being undersized at times, has always thrown everything into it. A Vic Country representative, Schlensog has plenty of scope for the Cats to work with despite being raw.

Geelong addressed its need for speed and skill in obtaining both Clark and Kennerley who will run on the outside and do it over four quarters. They picked up a couple of talls with readymade ruck, Darcy Fort meeting an obvious need, as well as Jarvis fitting the bill as a back-up ruck and third tall forward. Late in the day they added pressure forward, Tarca and father-son prospect, Brownless to make the most of what was not the greatest hand, having just the one pick inside the first round.