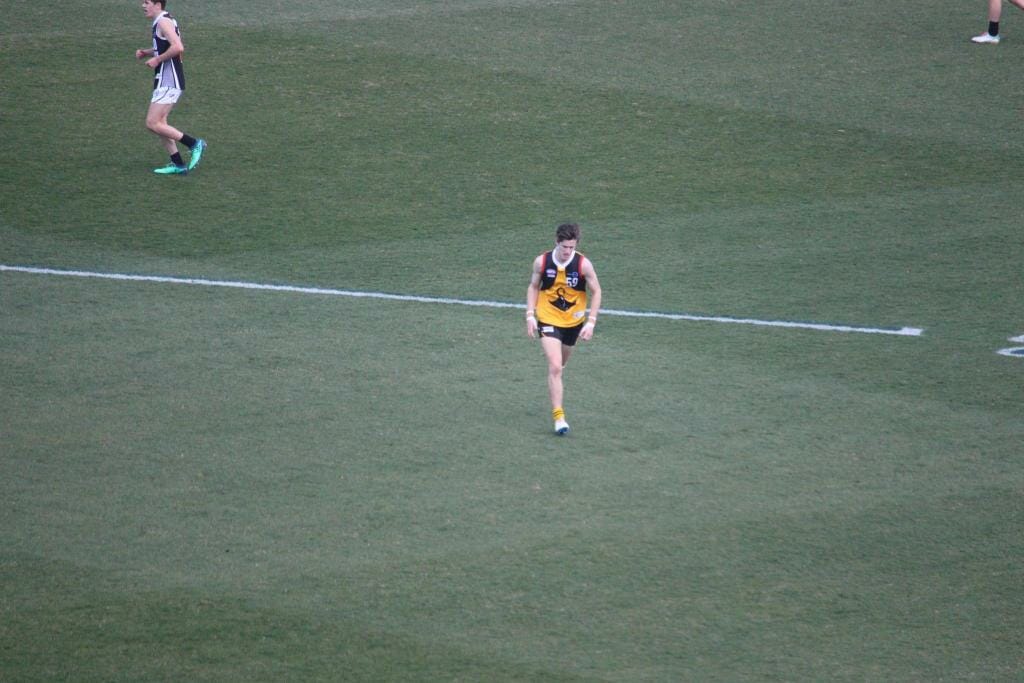 AFTER a lacklustre season Fremantle, have gone back to the drawing boards and assessed the areas of concern to ensure they draft players that can fill those voids.  They went after midfield depth following the loss of Fyfe’s partner in crime, Lachie Neale and attempted to fill the void left by the ageing Hayden Ballantyne by drafting small damaging forwards.

Sturt is a draft bolter that has proved he has plenty of talent and will be a great acquisition for the Dockers. The natural born footballer impresses with his strong hands, ability to dominate in the air and overhead marking abilities. With plenty of athleticism, Sturt could be a key player for Fremantle with his agility, speed and vertical leap, while there is room for improvement regarding his endurance with a big pre-season it can be worked on. Sturt’s efficiency by foot and general footy knowledge makes him a surety for Fremantle who will be pleased they secured him early.

Valente oozes leadership and good football nous making him a perfect fit for Fremantle. The talented midfielder will learn from the best and will easily slot into the mix alongside star midfielder Nat Fyfe. The onballer is strong at the clearances, has clean hands and most importantly can hit a target making him an integral member in his newly found side. While he uses the ball well his accumulation is also unrivalled, racking up high numbers and tackling hard to win the ball back for his side. With his readymade size and strong upper body Valente is shaping up to be a key member of the Fremantle size and after losing Lachie Neale, he could be a solid choice to step up and fill his shoes.

At pick number 57, Schulz’s readymade body and experience at VFL level will pay dividends for Fremantle who are searching for some extra depth across the ground. His former Williamstown teammate, Bewley is also set to join the Dockers which will make for a good pair as the two have played together and know each other’s game quite well. Schulz is renowned for his craftiness around the goals and ability to apply plenty of pressure on the ball carrier which will help to fill the role of small forward Ballantyne. With his readymade body, Schulz could quite easily make his way into the Fremantle side if they see best given his footy IQ, ability to win the footy and use it well.

Bewley will be a solid pick up for the Dockers, with Bewley renowned for his accuracy by foot. Having played for Williamstown at VFL level, Bewley is well aware of what it takes to make it at an elite level and has a mature body to ensure that he can impact the contest, which is exactly what Fremantle need. He can play both inside and outside making his versatility a key in his game. Bewley’s athleticism is also impressive with his ability to run both ways and use his speed to attack the ball. He can accumulate plenty of the ball which will help to take the heat off, skipper Nat Fyfe.

The experienced defender will offer plenty of security down back credit to his strong hands under pressure and ability to take big grabs. Hughes was re-rookied by Fremantle after putting in a solid season and showing off his athleticism down back to nullify his opponent. He also has plenty of speed to burn and can accumulate the ball with ease making him a valuable asset.

After an impressive season in the WAFL, Watson has made his way onto Fremantle’s list credit to his hard work and high football IQ. The talented defender showed great class throughout his WAFL season and used his ability to read the play to ensure that he can impact the play. With Fremantle’s defence at times being undermanned, the inclusion of Watson will help to provide that bigger body and with further development he will be able to rotate through the midfield more regularly.

The Northern Territory defender will play a big role down in defence for the Dockers with his ability to lock down players and minimise their presence on the field. He is solid when it comes to one-on-ones and can also sneak down forward and nail a goal on the odd occasion. Nyhuis goes in hard for the ball and is not afraid of the contest using his strong body to win the footy which will be important for the Dockers given their inexperience.

In the final selection for the Dockers, they picked up running defender, Jason Carter as part of their Next Generation Academy. Under the rules they were able to select Carter prior to the Rookie Draft, and Carter is added as a Category B rookie. He will add speed and X-factor to Fremantle’s defensive end.

All in all, the Dockers carefully assessed their needs and addressed them through recruiting some talented young midfielders who will help to add depth and some run through the centre. They also invested in damaging small forwards who can attack the ball with pace and hit the scoreboard which will be important in establishing a powerful forward line. While the attacking end was a main point of focus Fremantle also tried to enhance their defensive stocks through gaining some readymade and experienced defenders through the Rookie Draft.