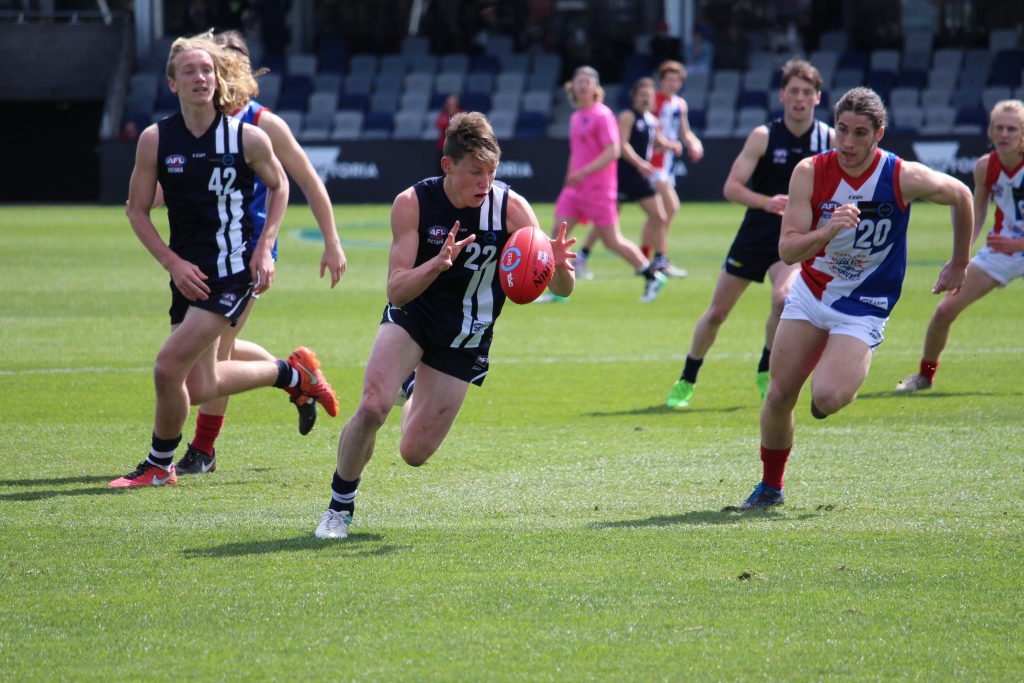 CARLTON took an aggressive approach to the off-season, and carried that through to the National and Rookie Drafts. The Blues took their man they had long being linked to in Sam Walsh with pick one, then stunned the crowd and those watching at home with a trade that in the future could be considered make or break. Either way, it was refreshing to see the Carlton list management team say enough is enough, grab themselves another top 20 pick and add to their midfield stocks immediately rather than waiting 12 months.

Walsh is the perfect selection for the Blues, and a no-risk pick. The Geelong Falcons midfielder could develop into a star regardless of where he went, and he will only improve the training standards at the Blues, as he would at any club. He has very few flaws to his game, and those he does he will continue to work on, and expect him to be right in contention for the Rising Star Award next season. He can slot straight into that midfield to give Patrick Cripps and Marc Murphy some relief, and is a future captain with he and Cripps driving that standards for the next decade through that onball division. A logical selection at pick one, and Blues fans should not fear, there’s no way this selection was ever going to be a mistake, especially not with this man now in the navy Blue.

If Walsh was a perfect fit for the Blues, Stocker is the next perfect fit. He is built like Patrick Cripps and share the hits that the Carlton co-captain cops. Stocker had more than his fair share of whacks this season, missing the Naitonal Under 18 Championships, but is as resilient as any other player the draft crop. Carlton paid what could be a high price for him to snatch him from arch-rivals, Richmond but fully fit he slots straight into the side. Another player with not too many flaws to his game, just needs to build his tank and get his body right.

The surprise pick of the draft without question, as O’Dwyer had only player the three games for Murray Bushrangers and was already preparing to head back as a 19 year-old next season. Those plans were happily changed, with O’Dwyer’s name read out late in the draft to head to Ikon Park next season. O’Dwyer spent his time as that pressure forward with a neat bag of tricks, but also a player who can play in defence. Very raw, Carlton fans need to be patient with him, but he is a low-risk, high-reward selection. As we mentioned on the live AFL Draft Chat – will be the most googled player from the draft, and he certainly was the most searched player on AFL Draft Central.

The father-son key position prospect made his way to the club to join brother Jack and follow in the Silvagni legacy. Now stretching over three generations, Ben joins an illustrious club, and while he will take time, has some traits that Blues fans will enjoy. He is taller than Jack and can clunk marks, it is just getting the consistency together and becoming more of a well-rounded player. Another tall who is a blank canvas as such, and could play forward as he did for Oakleigh, or back as he did for Vic Metro.

In a way, Goddard is a no-risk insurance policy, lasting until the Rookie Draft for Carlton to snap him up. The former St Kilda tall has had his injury concerns, but at this selection he could be a value pick-up. Goddard certainly has plenty of scope for the future, and is more readymade than Silvagni to assume a role should the Blues require it. Won the nod over Kieran Collins who will play for the Northern Blues instead.

An antagonising and polarising figure, Bugg will not be afraid to put it all on the line out on the field, and the Blues will be better for it. He is a depth player, but is more readymade than a skinny kid, and can play against bigger bodies should Carlton hand him a call-up.

Carlton’s draft period was aggressive and exactly what they needed. For too many years they have gone to the well and picked up talented kids, but with the trade period they brought in readymade players, then bit the bullet and traded out a potential top five pick next year to grab Stocker this year and immediately improve their midfield. They are essentially backing themselves in to have a good season, and that must put a smile on Blues’ fans faces. After grabbing two readymade prospects in Walsh and Stocker, they plucked out two developing ones in O’Dwyer and Silvagni, before dipping into the AFL experience pool in the Rookie Draft, taking Goddard and Bugg. Could the aggressive nature backfire for the Blues? Yes. Was it worth taking the punt? Absolutely yes. You might not agree with what they have done, but instead of holding, they have gone all-in for this rebuild and are looking to accelerate it to give the restless fans some joy sooner, rather than later.