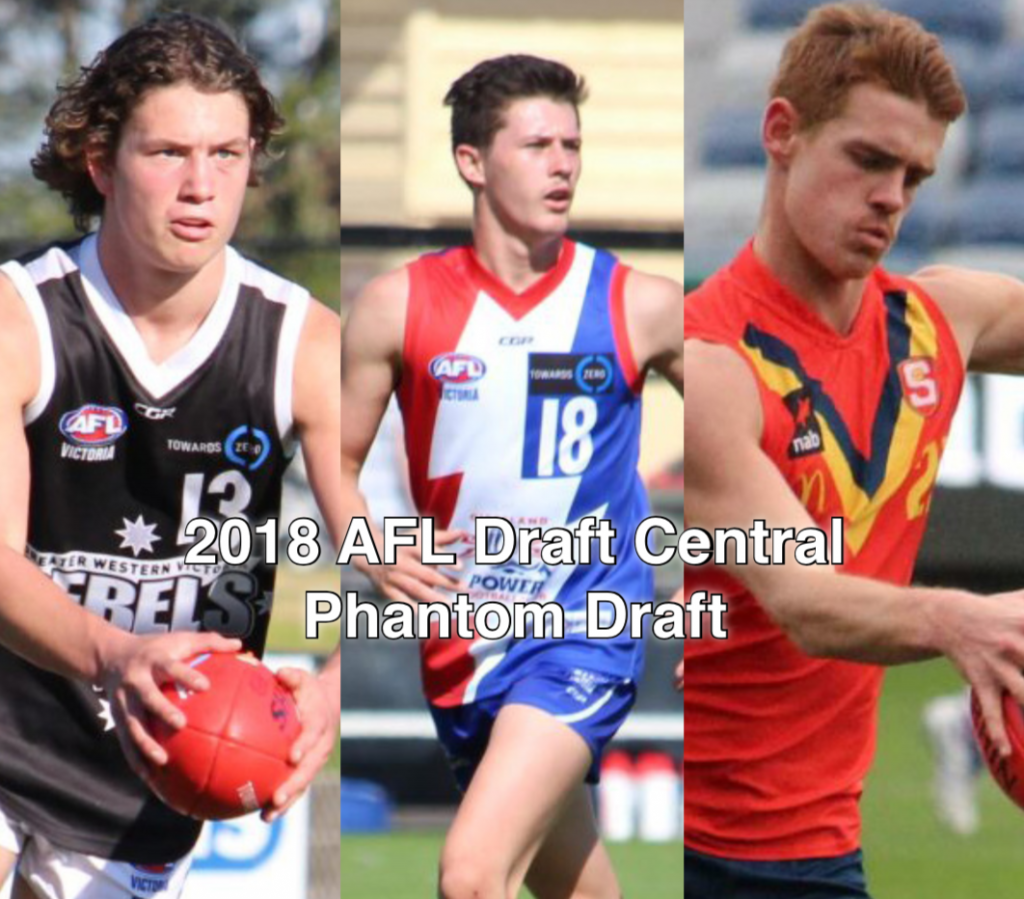 WE are now just three days away from the first pick being called in the 2018 AFL National Draft, and at AFL Draft Central, we have put our heads together and put forward our Phantom Draft, based on how some of the picks can fall. A few things to note:

Adelaide went with a distinct South Australian feel to it, taking the Croweaters’ three best midfielders from the National Under 18 Championships in Connor Rozee, Jackson Hately and Luke Valente. Rozee and Hately in particular could well go earlier, with St Kilda (pick four) and Gold Coast (pick six) considering the silky midfielder. It was an easy choice when Rozee was at pick 9, as was Hately who the Crows would be rapt to get at that selection. With the midfield sorted, Adelaide opted for talls after that, snaring Dandenong tall, Bailey Williams with #26, as well as local forward, Hugo Munn, and the exciting Zane Barzen from the Murray Bushrangers who can play a medium-tall role at half-forward.

A few fan favourites made their way to Brisbane in the draft, with Cam Rayner’s best mate Curtis Taylor seeming a good selection at pick 21. With Xavier Duursma off the board, Taylor is another one the Lions are rumoured to like, and he adds a point of difference inside 50 with plenty of scope. Then they targeted big bodies, with Ely Smith and Tom Berry – brother of Jarrod – while also matching the bid on Academy prospect, Connor McFadyen. They are at the stage where they do not need to fill too many holes, and just beefed up their midfield and forward lines with some bigger bodies who have versatility as well.

Carlton was tricky to pick for late, after clearly selecting Sam Walsh with the first pick. Walsh is the standout midfielder in the draft crop, and Blues fans should be thrilled to have him coming on board, as a safe, 200-game player and future captain. He is joined by mid/forward, Tyron Smallwood who just oozes X-factor and looks like great value late, as well as inside midfielder Sam Fletcher who bleeds for any club he plays for. Wrapping up the draft with father-son selection Ben Silvagni, Blues fans should be pretty pleased with the value they have received considering their late picks.

A bit of a straight forward draft for Collingwood with Isaac Quaynor and Will Kelly both heading to the club. The Magpies had no problems matching the bids, though there is a chance they go into deficit for 2019. Either way it will not stop them matching the pair who sure up the club’s defence. Collingwood will use a third pick – likely to be in the late 80s by the time bids and passes have shuffled up the order, with the Magpies contemplating a roughie from Western Australia – perhaps the unlucky Jack Mayo or Patrick Farrant to help strengthen their tall stocks.

Just the two picks inside the four rounds for Essendon, but no fear Bombers fans, along with a potential Shaun McKernan rookie upgrade, the Bombers are likely to take one or two more selections. They could target someone like a Nick Hind who has speed to burn and already knows the club well having played for the Bombers’ VFL side. But in the two selections Essendon did make, they went for the inside strength of James Rowbottom, and the ruck depth provided by Dandenong’s Riley Bowman, a couple of need-based selections for the Bombers in the Phantom Draft.

Fremantle went local for its picks, going West Australian for three, and a couple of South Australian boys as well. Fremantle fans seem divided on whether or not to select Ian Hill with the first rounder, but do not let an injury-interrupted season put you off, he is a genuine star. The Dockers also selected fellow West Australian, Sydney Stack to add class to the side, as well as half-back Damon Greaves. Fremantle are also rumoured to be interested in Sturt midfielder, Tom Lewis, while also taking a punt on the consistent Aaron Nietschke with the final selection in this Phantom Draft. They then can select Jason Carter with a later selection or as a free hit in the rookie draft.

Geelong made four picks in our Phantom Draft, picking up big-bodied inside midfielder, Riley Collier-Dawkins and two hybrid forward options in Josh Kemp and Charlie Sprague, before picking Oscar Brownless with their final selection. The father-son prospect can play midfield or forward, while Kemp adds a defensive element to the forward 50, and Sprague adds the attacking element which gives them plenty of scope for the future.

Gold Coast always had a strong hand coming into the draft, and much like we expect in the real thing, selected Jack Lukosius, Izak Rankine and Jye Caldwell with their first three selections. They add to their talent inside 50 and strength through the midfield. Later in the draft, the SUNS sured up their defence, picking half-back flankers, Jez McLennan and Matt McGannon, alongside All-Australian key position defender, Jacob Koschitzke. It means the SUNS picked up a tall at either end and added bucket loads of skill on the flanks.

GWS GIANTS filled a number of needs in selecting players with varying skill sets and versatility that enables them to play a number of roles during a match. Jordan Clark and Chayce Jones are your clean, outside ball users who can slot practically anywhere on the field, Ned McHenry is your forward pressure player who loves the physicality of the game, and Tom Sparrow late represents value as a burst midfielder. The GIANTS also matched a bid of Academy prospect, Kieren Briggs who slots into the ruck ranks which have been wearing thin given Rory Lobb’s departure.

They will have another selection late, but along with Next Generation Academy member, Irving Mosquito, Hawthorn took a punt on key forward, Noah Gown. The Gippsland Power teammates reunite at the Hawks and immediately add to the forward half of the ground with Jarryd Roughead coming to the twilight of his career, while Mosquito adds that forward pressure. Both are players who with the right development could certainly be great value players at these selections.

Melbourne has one of the more well-rounded teams and we targeted best available, with a focus on speed and outside run. Vic Metro captain, Xavier O’Halloran adds leadership and can play midfield or forward, while Will Hamill and Will Golds are classy outside ball users. Hamill will likely play off half-back and Golds off a wing, while Next Generation Academy player, Toby Bedford will cause headaches for opposition coaches inside 50.

North Melbourne had the three selections in the first four rounds, and will also be picking up Joel Crocker with the club’s last selection. In the first four rounds, they matched bids on Next Generation Academy prospect, Tarryn Thomas, and father-son prospect, Bailey Scott. Both are top talents who will be great inclusions to a midfield that could do with a dose of outside speed and versatility. Angus Hanrahan late is a developing forward who can play midfield and add another dimension inside 50.

Just the three early picks for Port Adelaide, selecting Ben King with pick five after brother Max was gone, while Zak Butters and Xavier Duursma add versatility and clean skills. Butters has great class and will play off half-forward or along a wing until he bulks up, while Duursma is equally lightly built and will play off a flank at either end or along a wing in time. Both know how to use the ball exceptionally well and have plenty of upside for the future.

Richmond will look to target bigger bodies at the coalface, so expect a couple of these types of names to land at the Tigers. Liam Stocker has long been linked to Punt Road, while Jack Bytel seems a no brainer at pick 42. Tom McKenzie adds a different type of midfielder with their next pick, having speed and the ability to play off half-back as well. Reynolds is similarly able to play off half-back or through the midfield, and has that prototype body size. With the final pick, Richmond took a punt on overager Brayden Ham who has elite athletic traits and can play anywhere on the ground.

St Kilda fans have been keen to secure midfielders, and while it still looks like Max King will be the first selection, they cannot be unhappy with a genuine franchise key forward who as an added bonus, supports the Saints. Throw in the outside run of Fraser Turner and Zac Foot, while Joe Ayton-Delaney comes off a half-back flank and might not make it to pick 70, but he was there in this draft and would be fairly quickly swooped upon. Durak Tucker is another player who will add some composure down back with nice athleticism and offers value at pick 47 if the Saints are so inclined to pick up the West Australian.

Sydney made four rather savvy selections in the draft, taking Academy prospect, Nick Blakey after matching a bid inside the top 10, then selecting three very different players with the three selections remaining in the 40s. They picked up overage speedster, Laitham Vandermeer, small inside bull,  Tom Joyce, and dual balanced midfielder, Jack Ross, all of whom are arguably more readymade than many of their contemporaries at the same draft region.

West Coast heads to the draft coming off a premiership, so targeting players who can fill depth for future years is important, and we looked at a variety of players to fill certain roles. They pick up draft bolter, Sam Sturt with their first selection, as well as overager, Luke Foley who remains in his home state. They were forced to match a bid for Jarrod Cameron at pick 41, but that seems straight forward, while picking up the readymade Mitch Podhajski, and local key forward, Dillon O’Reilly.

The Western Bulldogs got their two club-tied players through matching bids with father-son midfielder, Rhylee West and Next Generation Academy prospect, Buku Khamis. The Bulldogs also picked up the man they have been heavily linked to in Bailey Smith with their first selection and outside runner, Jacob Kennerley with their second round pick a #39. All could contribute during the 2019 season if the coaching staff are so inclined, so it is a readymade draft haul for the Dogs.