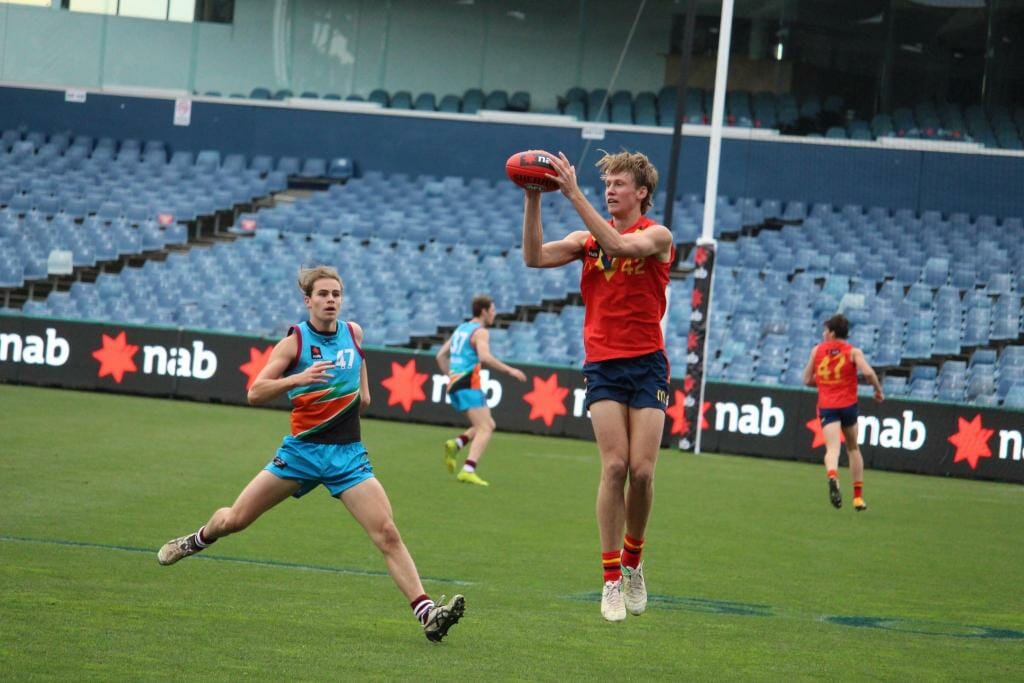 AFTER a disappointing season on-field and the resultant post-season exodus, Gold Coast Suns have plenty of gaps to fill come draft time – with the appropriate firepower early on to pick up some serious future a-graders. Most positions are there to be hit, and the Suns’ early picks could play a major part in shaping the rest of the top 10.

With Carlton set to take Sam Walsh with the first selection of the draft, Gold Coast are afforded the opportunity to package a couple of elite talents with the following two picks. A combination of South Australians Jack Lukosius, Izak Rankine, and Connor Rozee look most likely to head to the sunshine state at this stage, and all possess rare qualities in their respective games. Lukosius has been touted by some as the number one talent in the draft – widely compared to St Kilda great Nick Riewoldt on account of his cleanliness overhead and leading patterns, while having the added potential to move back or onto a wing. A ‘once in a generation’ prospect, Lukosius would slot straight into the hole left by ex-skipper Tom Lynch as a ready-made player who has experience against mature bodies in the SANFL. Midfielders Rankine and Rozee are vastly different, but both have the capability to double as forwards as they develop. Rankine has long been a prodigious talent, with his exceptional skills and x-factor on full show during his stand-out National Championship performance against Vic Metro, where he snared five goals. Rozee would be a sure bet at either pick three or six, possessing the leadership qualities Gold Coast desperately needs on top of a good balance of inside and outside traits.

Should the Suns steer away from a South Australian with pick six, Vic Country’s Jye Caldwell is one who remains right in the top 10 mix despite an injury plagued season, and has the same leadership qualities as Rozee to go with his complete midfield game. Tasmanian Chayce Jones is another in the same mould who has shot up draft boards of late, and Gold Coast could do worse than to snap him up given the ‘go home’ factor is a non-issue here. Another midfield talent that could be considered is Sandringham’s Bailey Smith, whose contested ball and tackle numbers are a class above. Either way, some top-end midfield talent is something most teams can’t get enough of, and the flexibility of each player listed is invaluable.

With key forward stocks taken care of early on, Gold Coast could look to sure up their back half with two selections in the 20’s. Pick 24 will slide given the amount of father-son and academy picks set to come in the first round, but a player like South Australia’s Jez McLennan would perfectly fit a need and should be available around that mark. A clean user and apt intercept marker, McLennan was an integral part of SA’s winning Championship team who can fill the gap left by Kade Kolodjashnij. Along those lines, West Australian Damon Greaves could be one the Suns target with pick 29 due to his marking prowess and rebound ability. With a need for key defenders, mobile back Jacob Koschitzke could be one they take early as one of the better options in that position, given a bid on Collingwood father-son Will Kelly will inevitably be matched.

Depending on what they do with pick six, a midfielder could still be on the cards here too, with the likes of Liam Stocker, Xavier O’Halloran, and Ned McHenry all viable ball-winning options with upside. The Suns could also mix things up with a bid on Bailey Scott at 24 or 29, who came through their academy but opted to nominate North Melbourne as his club of choice. Speaking of academy picks, Dirk Koenen should be on the board at the Suns’ final selection (80), and his availability could dictate whether they target defenders earlier. Caleb Graham and Lachlan McDonald are other possibilities for a rookie spots having received State Combine invites, while at least one other club is interested in Ryan Gilmore given he tested at the Rookie Me combine.