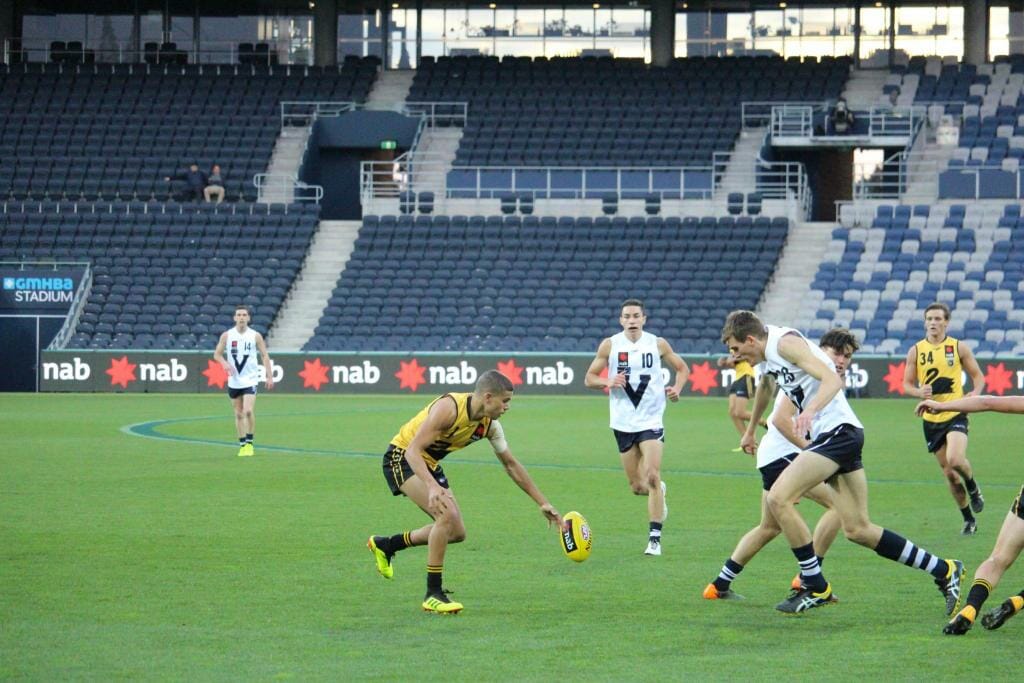 AFTER finishing fourteenth with just eight wins in 2018, Fremantle went on a recruiting spree, acquiring gun key forwards Jesse Hogan and Rory Lobb, a solid midfielder in Reece Conca and the speedy Travis Colyer. However they did lose star on-baller Lachie Neale to Brisbane, which leaves a significant hole in their midfield. But the Dockers have an array of picks and will look to the draft to further bolster their needs.

Fremantle originally went into the trade period armed with only picks five and 77 but some smart trading saw them acquire more picks to consolidate their rebuild. Their final draft positioning may change, nonetheless we will analyse who the Dockers should look at with each of their picks.

The Dockers do not enter the draft till pick 14, but could potentially snare local gun Ian Hill to fill their needs for a smart and crafty small forward. With Hayden Ballantyne nearing the end of his career, and with Brandon Matera coming off a poor 2018 campaign, Hill could be the spark up forward the Dockers crave. Other possible options include Zak Butters, Xavier Duursma, and Ned McHenry.

If he is available at pick 31, the Dockers could have a steal in Perth’s Sydney Stack who is one of the most exciting and impactful midfielder/forwards in this year’s draft pool. Despite only standing at 177cm, Stack has shown a desire to crash-and-bash his way through packs to win the hard ball before finding a teammate in open space. As well as showing an outstanding ability in the midfield, Stack can drift forward and have a presence inside 50. Other players around the mark may include James Rowbottom and Jack Ross.

Fremantle has been linked to South Australian young gun Tom Lewis and should snare him with pick 43. Lewis has been likened to former Docker Lachie Neale, because of his size, accumulation, contested work and his leadership qualities. It is also worth noting that Lewis is close with Dockers’ young gun Mitch Crowden and this may sway Fremantle in picking him at this selection, while another South Australian, Boyd Woodcock might come into the Dockers’ thinking.

With picks 65 and 81, the Dockers should look at some mature-age talent from the WAFL, SANFL or VFL. By choosing a mature-age midfield option, the Dockers will have a ready-made prospect who can slide into the midfield alongside Fyfe, Mundy and Blakely. Players to look at include Jye Bolton, Mitch Grigg and Michael Gibbons.

It is worth noting though that the Dockers will likely have a late bid on Academy pair Jason Carter and Tom Medhat, but there is a strong possibility that both could go to the club through the Rookie Draft.