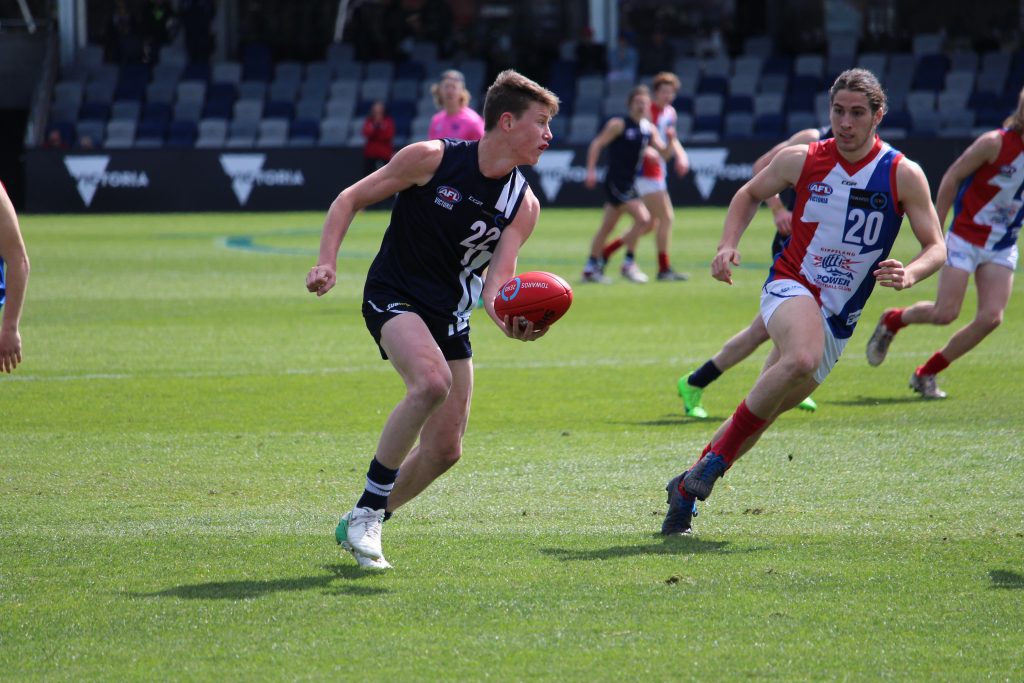 HAVING hit the draft hard in previous years, the Blues targeted a different age bracket in this trade period and may well do the same come draft time. Should Pick 1 remain in the bag, it looks like Carlton will have an obvious choice, and the three late picks they hold allow them to either give a mature-age state league player an opportunity, or find an Under 18 diamond in the rough.

We may as well get it out of the way early – should Carlton hold onto Pick 1, they look more than likely to select Sam Walsh. The Vic Country and Geelong Falcons co-captain won basically every individual award available to him, while only narrowly missing out on the Morrish Medal for the TAC Cup best and fairest. Walsh provides an outstanding mix of inside ball-winning and outside class, looking like a ready-made and reliable 200-game prospect.

The Blues can then put their feet up until Round 4, with their next selection coming at Pick 69. Another certainty looms with their late picks as the Blues have nominated father-son prospect Ben Silvagni for the National Draft, meaning they must take him should he not receive a bid from another club. Other late options with Carlton connections include Subiaco midfielder Wil Hickmott, who impressed in the WAFL Colts but missed out on a father-son nomination, and Calder’s Lachlan Sholl, who is the son of ex-Blue, Brett.

That leaves two free-reign late selections. Given the constant need to bulk up their midfield and provide guaranteed ball-winning support to newly appointed co-captain Patrick Cripps, Carlton should jump at the opportunity to bring in some much needed depth.

They may look at bringing in some clearance grunt, with the likes of Dandenong’s Sam Fletcher and Mitch Riordan likely to still be on the board, while interstate prospects Tom Lewis and Rylie Morgan are also ones who could provide midfield strength. Mitch Podhajski is another who has thrived in his overage year, with his experience at VFL outfit Coburg suggesting he can match it with mature bodies. Should they look towards outside run, Walsh’s Falcons teammate Brayden Ham is a player with great upside as an athletic phenom. Daly Andrews and Jacob Atley are options who can also drift forward from a wing, with Bendigo’s Atley looking to join his two brothers in the AFL and continue Carlton’s recent trend of picking Pioneers.

While they may look to cover a couple of bases with the aforementioned names, the only other area Carlton may want to bolster is its forward stocks. They look set in terms of talls with the recent addition of Mitch McGovern, but the Blues could look to a couple of established state league players to fill out the forward 50. Williamstown’s Ben Cavarra is a player who has long been touted as an AFL-level prospect, while Northern Blues general forward Jesse Palmer is one who can provide a third marking option after leading his side’s goalkicking.

Other state league players worth a look include ex-Crow and two time Magarey Medallist Mitch Grigg, as well as Cavarra’s Williamstown teammate Brett Bewley. Both could provide the midfield depth Carlton is after, while also fitting the age profile that needs bolstering most. With two selections all but in the book, the Blues will have to be crafty with their two remaining National Draft selections, and could use their rookie selections on state league players hungry for the opportunity. They will also have the option to continue their recent preference of packaging players from one or two sides, and it could pay dividends.