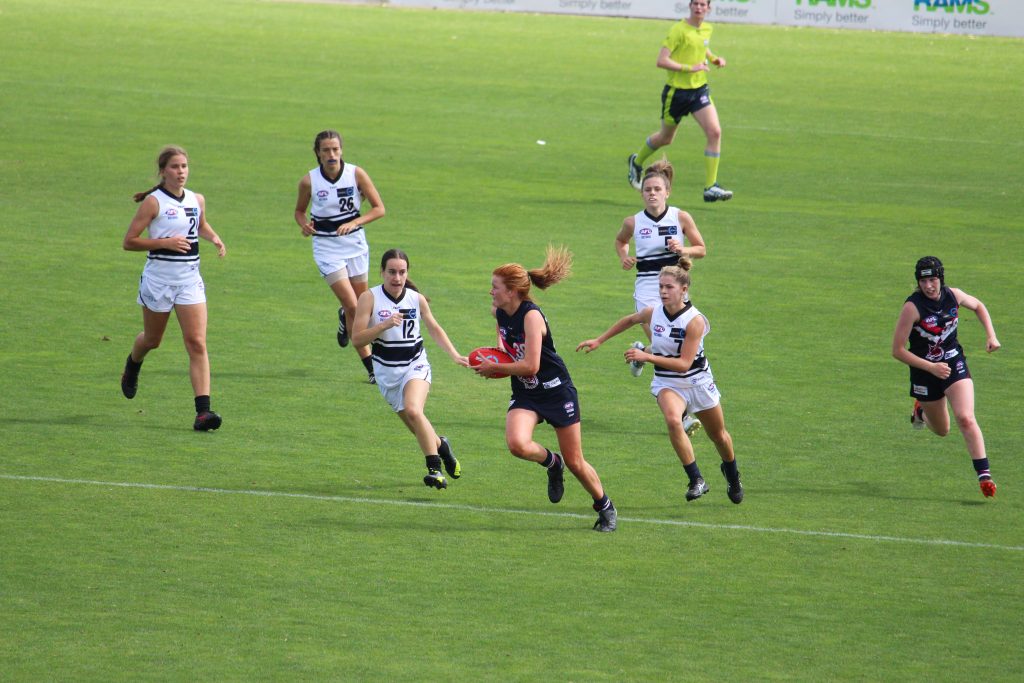 THE reigning premiers have chosen to defend their premiership title by bolstering their forward line stocks. While the Bulldogs lost star players such as Emma Kearney, Jenna Bruton and Aasta O’Connor, they don’t seem to be too worried, recruiting some young, experienced and international talent into their 2019 side.

Eleanor Brown will be a fitting replacement for Emma Kearney in the midfield. She possesses elite ball-use, especially by hand, often disposing of the ball quickly and cleanly to escape congestion. Brown also has a long and powerful kick, and can make an influence all over the ground. She spent some time at half-back during the AFL Women’s Under 18 Championships, racking up numerous disposals. She can also mark the ball well, making her a good fit to replace the loss of an important premiership trio.

Coming from the Crosscoders program, McCarthy impressed the Bulldogs, who took the forward with their 23rd pick. McCarthy played in the forward line for her Gaelic football side, and has now crossed over to Australian Rules to display her speed and agility in the competition. She will be a great addition to one of the most exciting forward lines in the league, which contains the likes of Katie Brennan, Isabel Huntington, Bonnie Toogood and Brooke Lochland.

The Bulldogs have further bolstered their inside 50 stocks with the addition of 19 year-old Kate Bartlett. Bartlett missed out on being drafted last year but will get her chance in the red, white and blue this season. It was hard to look past her at the AFL Women’s Under 18 Championships, as she dominated inside 50 for Western Australia, kicking six goals in five games and creating plenty of scoring opportunities. She earned a place in the All Australian team as a result, and will now fly across the country to join the Bulldogs.

Selena Karlson will help aid the loss of Bailey, Ebb and Ashley, who departed the club in the off-season. She is a smart defender who played 12 games for the Southern Saints this season and finished in the top 10 of their Best and Fairest. Karlson was also named in the best three times.

Jessie Davies is no stranger to the Western Bulldogs outfit, having spent time with them during the VFLW. She is a versatile utility who will add some depth to the side. Davies played seven games for the Bulldogs this season and is also a member of the VU Western Spurs. Having a player that can be used all over the ground will help the Bulldogs cover their off-season losses, especially that of Aasta O’Connor, who can be used in different areas of the ground.

Instead of replacing their losses, the Bulldogs went in a different direction for the draft, opting to boost their already powerful forward line. This isn’t a bad strategy at all, as more firepower inside 50 gives them more of a chance to defend their premiership title. But in the midfield, they could struggle, as the loss of Emma Kearney, Jenna Bruton and Daria Bannister will be hard to replace. Thankfully, Eleanor Brown will fill a part of this void, thanks to her brilliant hands and strong kicking. Selena Karlson will also fill part of the absence of Ebb, Bailey and Ashley in defence, after playing for the Southern Saints this year. Having a versatile player like Jessie Davies will also be valuable to add support roles into different sections of the field. Despite a stellar inside 50 line-up, the Bulldogs could struggle through the midfield and in defence, with the loss of some key players. Aasta O’Connor’s void in the ruck has also not been filled, making the ruck situation an interesting one.