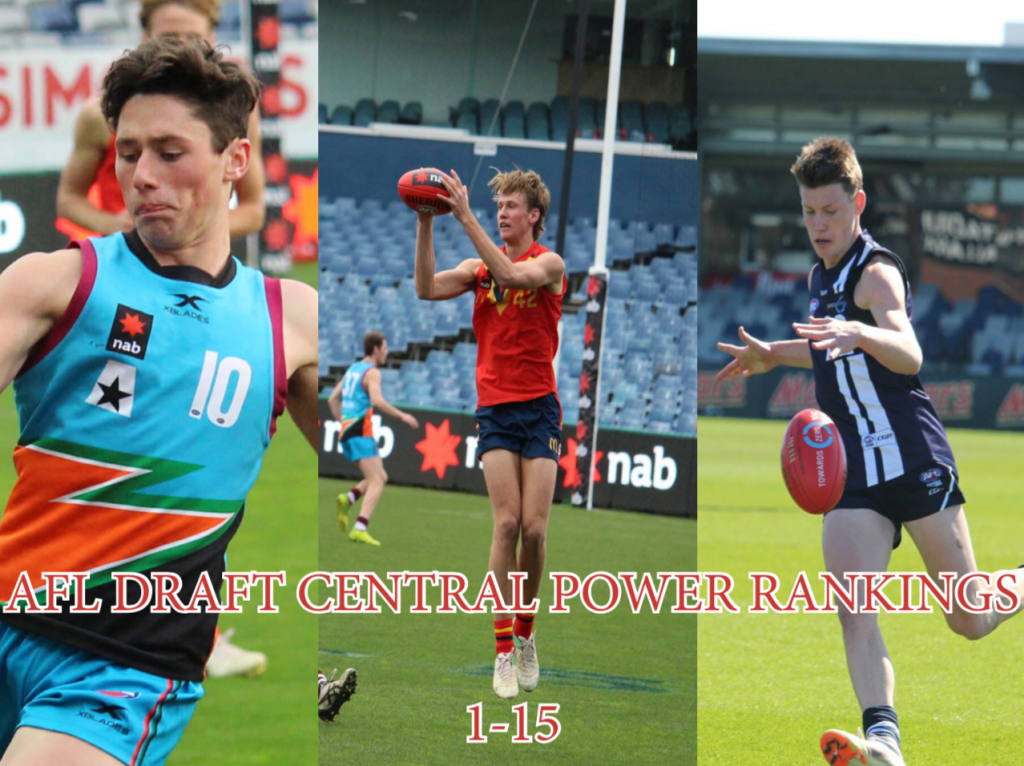 One of the top-age draft bloomers who was self-admittedly a fair way off 12 months ago, has turned it around to be a genuine first round prospect in 2018. He is tough as nails and despite multiple injuries – both pre and during games, Stocker battled through admirably. In the absence of Dragons skipper, Bailey Smith late in the year, Stocker stood up terrifically and added another dimension to Sandringham’s midfield brigade. He wins the contested ball, gets to the outside and has a penetrating kick. Once he can further improve his endurance, he could take his game to another level as well.

One of the most consistent players in the draft crop, and you would not be completely silly to suggest he could be the third best midfielder in the draft without injuries hampering his year. He is being talked up as a top 10 prospect and deservedly so. There is not too much to tweak with Caldwell’s game, and if he can get in a big pre-season, the sky is the limit. He can play inside, outside or up forward, and we dare say he would be easily in the top 10 if he had been able to show off his ability more consistently this season. Nonetheless he looms as a very good pick-up for any club that selects him. A great leader too.

Another “Mr Consistency” with a lot of the top midfielders in the draft not having too many major deficiencies in their games. Duursma rarely had a bad game in season 2018, leading the Gippsland Power to a surprise preliminary final, and performing well for Vic Country in defence. He can slot in nearly anywhere on the field, uses the ball well and moves nicely in transition. He is light but can win the contested ball or be the runner on the outside. He also knows how to hit the scoreboard, often picking up speed during a series of quick handballs and unloading from just inside 50 on the run for an important goal.

Unlike some of the other midfielders in the first round, Collier-Dawkins does not have the consistency, but what he does have is the upside. He is that prototype midfielder, built like Patrick Cripps but with Adam Treloar’s burst speed. He is not a huge accumulator of the football, but he can certainly do some amazing things with it, and he has a long, penetrating kick which he uses when up forward or bursting out of a stoppage. He needs to show it on a more consistent basis, but his hurt factor and upside is as good as anyone in the draft. He is a long-term prospect who fans will enjoy watching over the years.

Hately is the South Australian balanced midfielder who just ticks a lot of boxes. He hardly does a thing wrong, yet does not receive the same plaudits as some of the other state representatives. He accumulates the football, can play inside or out, is a clearance expert and uses it consistently by hand or foot. He could walk into a lot of sides early on, and have an impact which could be a great boost for those sides needing a readymade midfielder who has already played senior football against bigger bodies. A player not to discount because he has a lot to offer and he will no doubt show that early on in his career.

The 180cm Tasmanian is the smallest midfielder to slot into the first round, but like many others, he does not have too much to fault about his game. Aside from the occasional decision, Jones tends to use the ball well, is one of the best kicks in the draft crop, wins his own ball, runs and has elite athleticism, can kick goals or play off half-back. In short, his game is fairly close to complete and we would probably argue he would be in top five talks if he was five centimetres taller. No reason Jones cannot go top 10 on draft night though, and while he could slide through to the second round, it would be an absolute steal for any club that selects the future captain.

North Melbourne fans have been waiting for Thomas for some time since he burst onto the scene as an Under 16s player for the Allies at the National Under 18 Championships – showing just how gifted he was at that time. He has not waivered from the top 10 in our eyes, and just has massive upside. He is the cleanest player in the draft at ground level with velcro hands, and he oozes class all over the field. He is light, but well built in terms of height, and once he fills out and develops further at AFL level, he will be a star. Genuine X-factor talent and a fully fledged top 10 player, even if a bid comes outside that mark.

A good season really threw the light utility into high-end draft calculations, with Rozee always thereabouts, but shooting up after a good SANFL League finals series with North Adelaide. Some were wondering what had happened after a quiet National Under 18 Championships, but South Australia threw the bigger bodies in the middle, and Rozee played on flanks, using his elite kicking skills to hurt opposition sides. He is another who will need time to fill out, but he has some promising upside if he can fulfil it. A great character as well, Rozee will ensure he gets the best out of himself which is why Gold Coast would be considering him with pick three.

He has had comparisons to ‘Buddy’ Franklin, and they are not too far-fetched with Blakey having the size of a key forward, but the smarts and athleticism of a midfielder. He is a huge inclusion to the Swans outfit, and could play early on, but the Swans will be sure to bulk up his wiry frame before subjecting him to monster key defenders. Expect him to play an outside role with some time in the midfield before he can bulk up and eventually take over from ‘Buddy’ inside that forward 50. Not a huge accumulator, but boy does Blakey have some nice tricks, and some high X-factor which will excite Swans fans.

The third Sandringham Dragons player in the top six, Ben King has put together a terrific season for Haileybury and showed off what he is capable of for Sandringham late in the year despite having less opportunities with limited inside 50s for the Dragons. He can play at either end, and showed after a great season in defence last year, and now up forward this year, that he will fill a void wherever needed. The fact he could be this far down is remarkable given he could genuinely be a pick one in a lot of drafts. A 200cm key position utility who can run the 20m sprint in under three seconds? Yes please.

Missed seeing him strut his stuff in the second half of the TAC Cup season after that achilles injury put an end to his year. A consistent inside midfielder with great speed and elite endurance, Smith is as safe as Walsh in terms of picks, and if a team could somehow pair the two together, then that cements a terrific culture at that particular club for the future. A natural leader who is a high accumulator of the football, a massive clearance winner and a bone-crunching tackler, Smith is a top five player who like the others at the top-end of this list, could easily be pick one in most other drafts. Terrific selection.

It is not too often a kid who does his ACL after playing just one TAC Cup game still goes in the top five, but here we are. He was never going to fall too far given his athleticism and ability to just dominate games. Just ask the Oakleigh Chargers defence who had not answers to stop him – when Will Kelly was a forward – and he monstered undersized defenders with his massive vertical leap and contested marking. He booted 8.6 in windy conditions that day at RAMS Arena, and genuinely had a laugh with the ball delivered to him with ease. If he gets a big pre-season in and more strength work done, he could be a very scary prospect up forward.

Most agree he is the X-factor of the draft. No doubt that Rankine has all the tricks a player could want, and can literally produce plays that no-one else in the draft could. He can kick bags of goals as a small forward, dominate through the midfield with his speed and agility, and take a game away from the opposition in a matter of minutes. His endurance and consistency are areas that could continue to develop, and he is prone to the odd brain fade in terms of discipline with 50m penalties as such, but as we like to say – it is the price you pay for greatness, and in terms of upside and sheer brilliance, Rankine is the number one in that department.

The safest pick in the National Draft bar none. It is easy to see why Carlton would select him with pick one, and in terms of midfielders he just ticks practically every box. To poke holes in his game you have to get nitty gritty, but honestly, he is just a keeper and a future leader. He will add bucketloads to that Blues midfield both on and off the field, and looks every bit a 200-game player. Just a talented midfielder who you know what you will get each and every week, and if there was a genuine way to have two number ones in this list he would be there. Walsh has not moved from this spot all year, and it is easy to see why.

Many seem to be somewhat writing the talented tall off a little given he is not kicking five goals from 20 touches and 10 marks every single week against senior bodies. As far as we are concerned, the skillset and ability he has both athletically and physically is unbelievable, and if he was playing in the Under 18s instead of the League, you would be seeing those kind of numbers each and every week. When the opposition know you are a talented kid, they will make sure they work harder to stop you, and Lukosius has done a terrific job, but just tired towards the end of the year which is more than fair. He has the capability to be a star key forward, key defender or midfielder and for his size, most people just cannot hit targets like he can, and move as well as he can. He has not lost his number one position all year, and both he and Walsh are the clear standouts come the draft month.