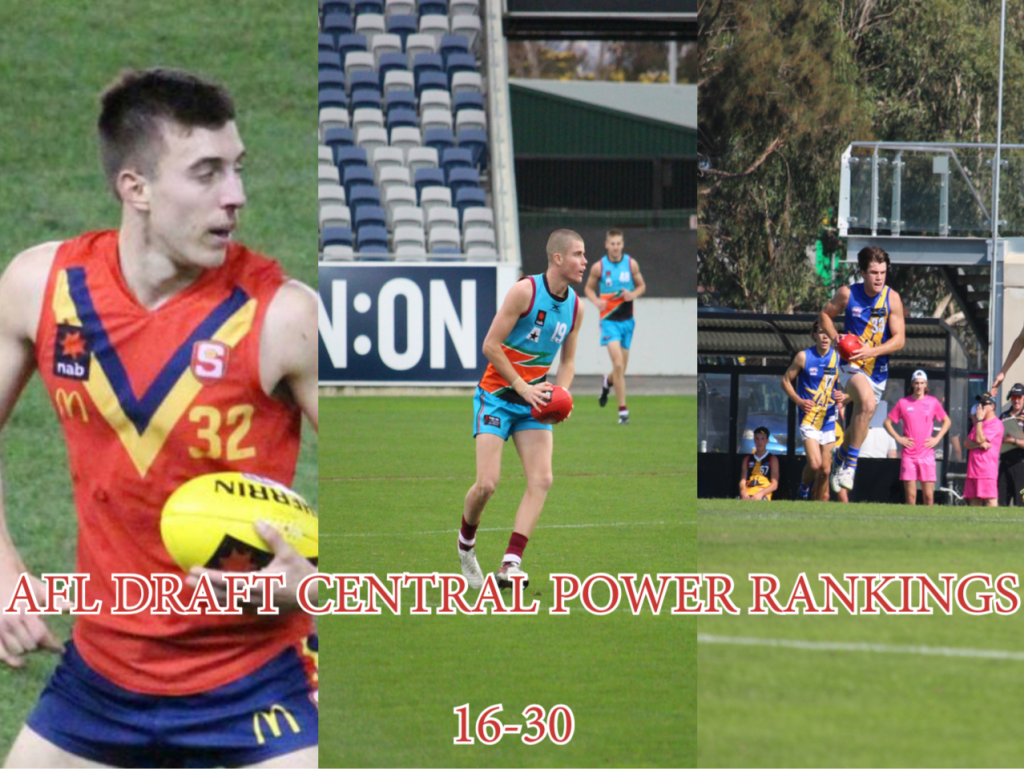 The top GIANTS Academy prospect had a year to remember through the Academy Series and the National Under 18 Championships, winning the Most Valuable Player (MVP) awards for both the GIANTS and Allies, while also named ruck of the All Australian side. He adds a point of difference to any side given his high endurance base, and ability to just compete and do all the defensive things, and ground work/second efforts to perfection. He is not the most mobile player, but with a frame that is readymade for senior football, Briggs is highly rated both internally and externally, and is expected to receive a bid in the second round.

The over-age midfielder has found his straps this season after missing out on being drafted last year. He has become more influential with and without the ball, making good decisions and using it well through the midfield and around the ground. He has a consistent base week-in, week-out and could provide some immediate relief to a team craving an inside midfielder. He made the WAFL Colts Team of the Year despite battling injuries at times, and was solid through the National Under 18 Championships. Expected to be the third or fourth West Australian drafted behind Ian Hill and Jordan Clark, and perhaps Sydney Stack.

The South Australian MVP and captain led from the front in the National Under 18 Championships, and despite injury curtailing his year, Valente showed enough to suggest he could even push into the first round. At his best he is a top 20 player, and it showed when Valente received an invitation to this year’s AFL National Draft, meaning he is highly likely to be taken in that first round. A natural born leader, aside from some athleticism,  there is not too many faults with his game and expect him to be one of the safest picks in the draft crop with his attack on the ball and willingness to get his hands dirty, second to none.

The X-factor from the Cannons has had an up-and-down year, which is what is the question mark hanging over him, but no-one could dispute his best is as good as anyone’s in the draft. He struggled for consistency, but when he was “on” he was really on, and could turn a game with a massive quarter of multiple goals. He stood up to be an important player at times through the championships, and looms as one of those players where clubs will be eyeing off each other to see who grabs him first. Taylor has great upside that could result in a genius pick down the track if he drifts to the second round as expected.

The nuggety midfielder/forward might not be the tallest player, but he has all the heart and ability you would want from a player. Not afraid of a scrap, and just attacks the contest with vigour, McHenry offers a club plenty of versatility with his agility and smarts outweighing his 174cm height. He knows where the goals are up forward and makes good decisions with ball-in-hand and executes by hand or foot. A player predicted to drift into the second round because of the size knowing he will have to play outside or as a small forward, McHenry looms as another bargain for clubs past pick 20.

Despite being a member of the Gold Coast Suns Academy, Bailey Scott chose to follow his father and head to Arden Street, with the Kangaroos having first chance to snare the consistent youngster under the father-son bidding system. The Kangaroos won over Scott ahead of the Suns, and Cats, with Scott likely to play up forward early on before progressing into the midfield. He has nice offensive and defensive traits, and despite not looking at smooth as others, he uses the ball well and can hit the scoreboard. Some clubs rate him inside the top 20 – a bid will likely come shortly after, with Scott not escaping into the 30s without being claimed.

A composed user of the football at half-back, McLennan’s National Under 18 Championships performances threw him into the spotlight and has earned his place inside the top 25. With all the talk around South Australia’s top four, as well as Valente, McLennan has gone about his business well, and is that defender who should be available to most clubs, and a player that will be reliable for years to come. Has SANFL League experience too with Central District, not looking out of place against men, and showing off his elite kicking skills. Adelaide might want to pounce with their last first round pick, but there will be no shortage of clubs in the market for a “quarter-back”.

The Western Jets and Vic Metro captain has been a consistent player in season 2018, playing both on the inside, outside and up forward. O’Halloran has terrific athleticism, with fantastic acceleration, speed, agility and endurance, as well as an insatiable work ethic that sees him get the best out of himself. He is strong overhead and can penetrate through zones with his kicking, and he is a player who will be considered for the first round, but should not come too much later.

Butters had an early finish to the 2018 season, given the shoulder injury ended his year. He is a fantastic talent with high upside, and can play through the midfield or up forward. He has that touch of class about him and while he is as light as they come, he does not waiver in his attack on the ball. There is no doubt he is more of a long-term prospect with his body size, but he could play forward early in his career, before progressing into the midfield down the track. He is a player that you want to have the ball in his hands, and Butters is the type who will create a nice following because of his good decision making and skill execution in the forward half.

Rated much higher throughout the year, Williams’ inconsistent season at times has him drop a little to just outside the top 20. He is a player who could be snatched up with a first round pick, but is more likely to be top 30 more so than top 20. He has the highest vertical leap of anyone, and he clunks contested marks strongly. Williams has had some worries in front of goal, with confidence and inconsistencies forcing him to miss some gettable shots. He can play ruck or down forward, but is more likely to settle into a key position forward role while giving a chop out in the ruck from time to time.

A kid who other than those deep in recruiting circles, many would not have heard of three months ago, now slots into the top 20. He is a medium forward who is good overhead, has elite athleticism and just competes for the football in the air or at ground level. He lacks endurance given he missed the cut for the initial Stingrays’ squad, but has not put a foot wrong since after strong performances for Peninsula Grammar in the APS. With game smarts and creativity in spades, Sturt has great upside that clubs would be excited about developing. Still raw, the forward is a player that will take time, but could be easily worth the wait.

The Collingwood Next Generation Academy member will be a gift to the Magpies with Collingwood expected to very quickly match any bid that comes in. He is an outstanding leader, with great athleticism, good run and carry, and decision making. But his biggest strength is his football IQ, that is often not rewarded by looking at highlights, but the work he does off the ball to shut down gaps in play, or intercept balls that float through the middle of the ground – in some instances Quaynor would come off his opponent to dash at a ball and not break stride. He could easily play senior football next year, replacing Sam Murray off half-back.

We refuse to drop the exciting small forward/midfielder outside the top 20 despite him seemingly dropping on rankings everywhere. He has far too much X-factor and while 12 months ago he was talked up as a top five pick, his inconsistent season through various injuries and some form dips see him drop to late first round. The West Australian teams are perfectly situated to select him in the draft, and he is another natural born leader. With his cousins, Stephen and Brad already in the purple, Fremantle might look to add to the family tree at the club, with his skills and decision making among the best out there.

The Western Bulldogs father-son could receive a bid in the top 20, but is likely to be in that early second round. The Dogs will match and he will head to the kennel where his father, Scott became a legend. Very similar to his father, West is small in stature, but stands tall in heart and determination, with his clean hands, ability to read ruck taps and move through stoppages among the top features in his game. He also knows how to play forward as either a leading forward, or a crumber, and that is where he will start his career before ultimately progressing into the midfield. He might be the 180cm, but he can still do some serious damage in the midfield.

One of a number of players who burst onto the draft scene after a terrific National Under 18 Championships. Could well go top 10 by draft night, but he is rated inside the top 20 safely. He is a creative half-back who moves well and just keeps winning the football. In time, he will be expected to progress onto a wing potentially, but he has made the defence his own throughout the championships. He has the ability to hit-up some terrific pinpoint passes, but it is his decision making and composure, as well as his positioning that sets him aside as a general defender. Likely to be the first natural medium defender picked in the draft.