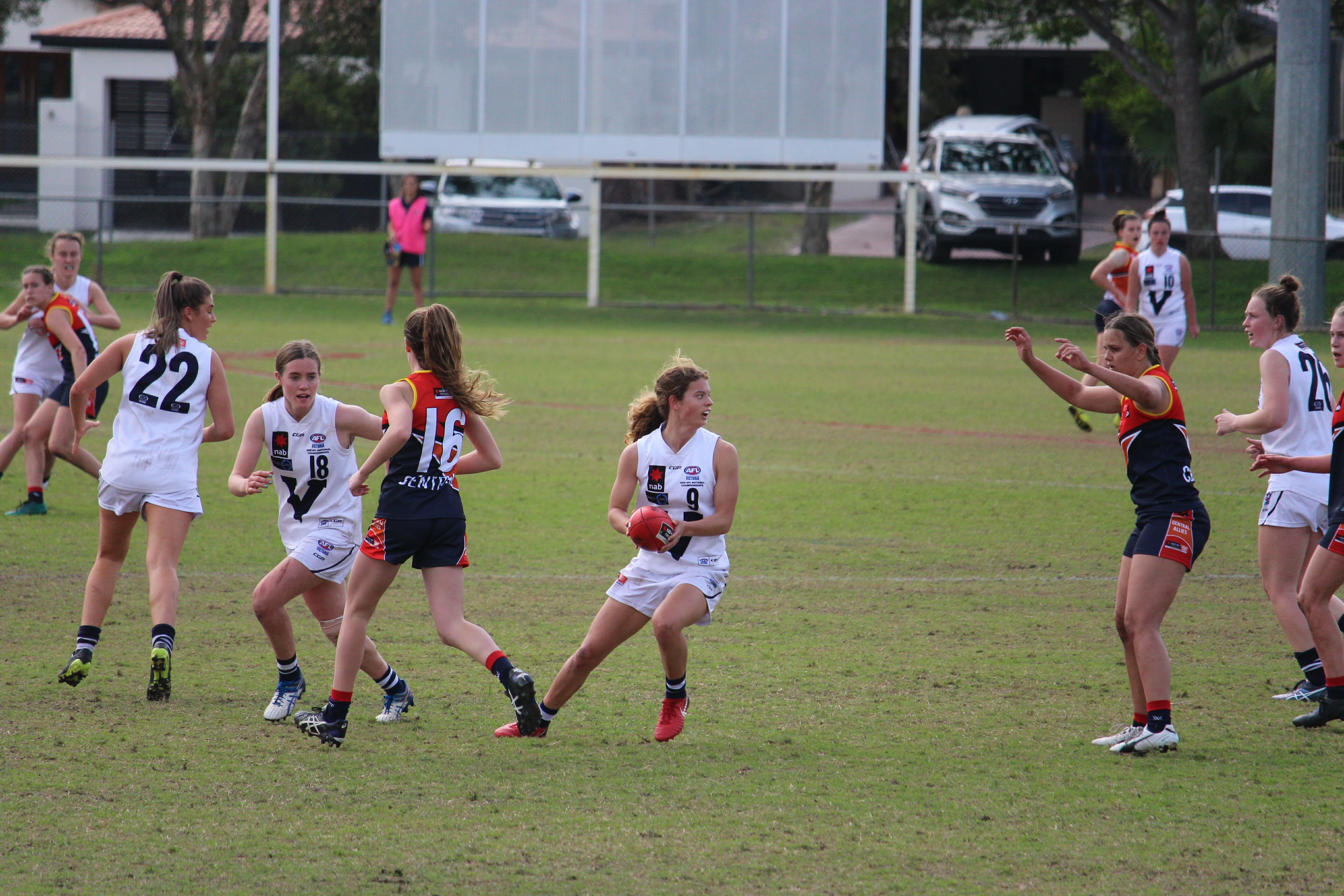 THE Cats trusted in their local talent, drafting six players from either the TAC Cup Girls or Victorian Football League (VFL) Women’s team ahead of their inaugural season. Two players were drafted from the Greater Western Victoria (GWV) Rebels, while one hailed from the Murray Bushrangers. After making it to the VFLW Grand Final, coach, Paul Hood appears to have huge faith in his local ready-made talent.

There is not much that hasn’t been said about Nina Morrison. She was long touted as the number one pick, and lived out that dream. At the AFL Women’s Under 18 Championships, Morrison also took home the Vic Country Most Valuable Player (MVP) and the overall tournament MVP with Madison Prespakis. She also shared the TAC Cup Girls Best and Fairest award with Prespakis. Now, Morrison has the opportunity to show the nation what she’s made of and undoubtedly, her electric chase-down speed and fierce tackling will be on display. Her explosiveness down the wing combined with her ability to rack up the footy will be invaluable for the Cats.

Van De Heuvel’s versatility will be of much use to the Cats. She played mostly in the forward line during the TAC Cup Girls season but also spent some time in the midfield in the AFL Women’s Under 18 Championships, highlighting her ability to break the lines and penetrate forward. Van De Heuvel was GWV’s leading goal kicker this year with six goals from seven games and made the 2018 TAC Cup Girls and All Australian teams on the half-forward flank. She will be a great help to Kate Darby, Danielle Orr and Phoebe McWilliams inside 50.

Webster is another versatile player, but thrives off running off the half-back line. She can shift into the midfield when needed as well, due to her valuable booming kick that sends her team forward. She was named at full-back in the TAC Cup Girls Team of the Year and represented Vic Country this year, making herself known in defence. Webster is a great overhead mark and has brilliant run and carry, which will really assist the smarts of Anna Teague and Melissa Hickey.

Purcell was one of the fiercest players in the TAC Cup Girls competition, hurting players with her clearances and aggressive tackling. Purcell’s immense power helps her break through congestion and enforce her blistering run and carry. She had a marvellous year, taking home the Geelong Falcons’ Best and Fairest, playing in a premiership with the side, playing in a Grand Final for the Cats’ VFLW side, making the TAC Cup Girls Team of the Year and All Australian team. She will provide great support for Richelle Cranston, who can also hurt players with her power, aggression and run and carry.

Denby Taylor was one of the smartest defenders in the TAC Cup Girls season, hurting players with her solid hands and run and carry off the half-back flank. She can be rotated through any position in defence, and also proved she could dominate on the wing, winning the best on ground award in the TAC Cup Girls Grand Final while playing in that position. It will be interesting to see what Paul Hood does with her, given her capabilities, but undoubtedly, she is a very handy pick-up for the Cats.

Another defender with solid hands, Clarke and Taylor should work together in the back half to prevent opposition scoring. The Rebels defender made centre-half back her own in the TAC Cup Girls competition, creating a wall with her strong marking and kicking. Clarke was named in the TAC Cup Girls Team of the Year as the centre-half back, represented Vic Country in this year’s AFL Women’s Under 18 Championships and also spent some time with the AFL Women’s Academy.

With a ruck line-up of Erin Hoare, Aasta O’Connor, Maddy Boyd, Kate Darby and the newly added Rene Caris, the Cats should dominate the midfield. Caris not only has a great leap but is agile at ground level, thanks to her clean hands and precise kicking. She was named in the TAC Cup Girls Team of the Year and also spent some time with the AFL Women’s Academy, giving her valuable experience in the Cats line-up. Caris featured for Carlton in the VFLW season, and proved that she could match it up against the bigger bodies in the AFL Women’s competition.

Maighan Fogas was one of Geelong’s most consistent midfielders this year in the VFLW, thanks to her exciting run and carry, clean hands and accurate kicking. She came second in Geelong’s VFLW Best and Fairest after playing 17 matches and being named in the best seven times. Her ability to fight for the ball in congestion made her a standout during the season, and if she continues to bring this trait into the AFL Women’s season, it will prove vital in the Geelong midfield.

Coventry is your traditional no-fuss defender that consistently gets the job done. She is a great lockdown defender, which will prove vital if the Cats are to stop dangerous attacking teams such as the Western Bulldogs. Coventry finished in the top 10 of Geelong’s Best and Fairest and played 17 games for six appearances in the best.

Keryk worked incredibly hard to get back onto an AFL Women’s list in the off-season, after getting delisted by the Blues. She went over to the Cats halfway through the VFLW season and made an immediate impact with her ability to consistently rack up the footy and kick or handball long to get it out of congestion. Out of her 12 games during the season, she featured in the best on eight occasions, proving how damaging she is in the midfield. Her finals series was one to remember as well, gathering double-figure disposals in each match. Keryk’s experience combined with the youth of Morrison and Purcell will be fantastic to watch.

Geelong has built a fantastic AFL Women’s side ahead of its first season in the competition.The Cats’ midfield will include Morrison, Purcell, Keryk, their forward line will feature the likes of Darby, Orr and McWilliams while their defence will be stacked with Clarke, Taylor and Coventry set to make a big impact. Add the ruck stocks of Aasta O’Connor, Erin Hoare and Rene Caris, and the Cats all of a sudden look very threatening to make a big statement in their first season of AFL Women’s.