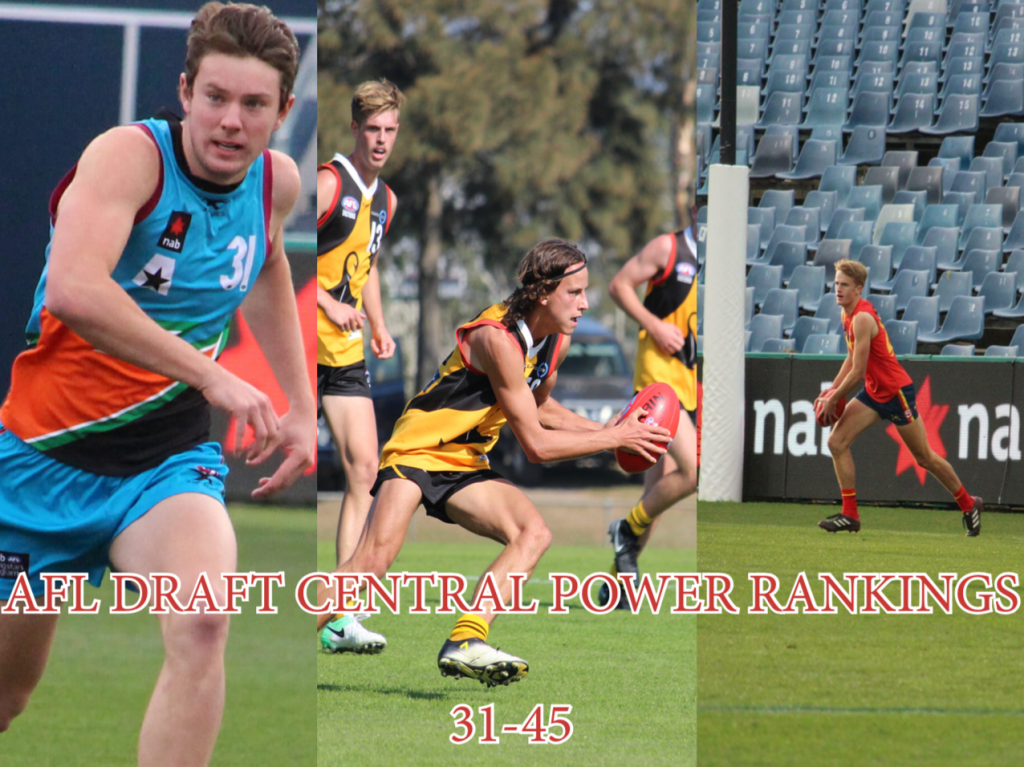 The exciting Dandenong utility has the capability to do some amazing things on the football field, he just needs to find the consistency to take the next step. Foot is a remarkable story, coming from a long way back having missed initial selection for the Stingrays, coming into the program in 2018 and then bursting out of the blocks with a strong first half of the season to earn Vic Country honours. He had a quieter second half of the season, but still had some eye-catching moments, and he knows how to run and hit the scoreboard, playing inside or out, and has a good base from which clubs can work with at the next level, and a high scope of improvement.

Ross is an interesting player to place. He just received a State Combine invitation, but looking at his overall profile, there is not a lot of deficiencies in his game. He is consistent, a leader, uses the ball pretty well, wins clearances, goes in hard, runs both ways and just gets the job done, week-in, week-out. There are not too many State Combine invitees who get drafted in the top 50 – usually one per year on average, but Ross could be that player. His ability to play a multitude of roles through the midfield helps, and he is more readymade than most to stand up against senior bodies. A good mid-draft prospect.

A versatile key position player who is better suited in defence, as shown during the National Under 18 Championships, earning All Australian honours. Koschitzke while not super athletic, is mobile enough to match it with most players, and has the size to take on the bigger forwards going around. He is a member of the GWS GIANTS Academy and is really strong one-on-one and does not often get beaten easily.  However, under the ruling of the Riverina area now being up for grabs, Koschitzke is just that – up for grabs for anyone, so not tied to the GIANTS. He has had a really impressive season, that after starting okay, came alive during the championships and has not looked back. Injury ended his year early, but he’s a perfect pick for a third round selection.

Another West Australian who honestly seems a little underrated for what he offers. He has only played at Colts level in the WAFL which might be a knock on him, but he consistently racks up the ball, and even at the National Under 18 Championships before injury struck, Greaves showed he has good athletic traits. He uses the ball well under pressure, executing by hand or foot. He screams a bit of Tom Doedee, not in the same comparison, but in the way that he has traits which catch the eye and Greaves could go higher than what many might think. Good value at this stage and one player we rate.

The outside runner from Tasmania has had a strong 2018 season, and was one of the more impressive players for the Allies in the National Under 18 Championships. He knows how to win the ball and get forward, and would add an extra element of class to any side. The next step is improving his contested work, but his outside game is very good, and expect his run and carry to be highly sought after in the draft. Another player amongst the mid-draft log-jam of players who have improvements to make but have a nice foundation base of traits from which clubs can build upon.

The AFL Academy member was a top 30 prospect coming into the year, possibly top 20. But back issues throughout 2018 have seen him drop down the rankings and now the big-bodied inside midfielder looms as a player who can be snatched up mid-draft and provide instant value to any side in the AFL. He is readymade and capable of slotting into the midfield, is strong overhead and has a powerful kick. Bytel was co-captain of the Calder Cannons this season so he has natural leadership qualities to add to a young side, while having the immediate impact for a finals-bound team as well.

While the likes of Bailey Williams and Sam Sturt have caught the headlines, the classy Will Hamill continues to fly under the radar as a prospect with high upside. He is not a huge accumulator and is still quite skinny, but Hamill has that perfect blend of speed and skill, which clubs will turn to – possibly earlier than predicted. He is a smooth mover who has played predominantly off half-back, but also through the midfield such is his ability to work his way out of trouble. He might be more of a long-term prospect than an immediate walk-up starter, but Hamill is someone who could be considered one of the better steals if he develops as he could.

The Western Bulldogs Next Generation Academy member, Khamis is a player who just needs to bulk up before slotting into a half-back role. He is a great reader of the ball in flight, positions himself well and has an elite kick in absolutely every sense of the word. He had just over one per cent of his kicks end in clangers, which is a remarkable feat, and while he has to continue to work on his game sense and some more defensive attributes, he is good one-on-one and really strong in the air. Bulldogs fans will be very happy to welcome Khamis to the kennel in the upcoming draft.

The South Australian gut-runner is an outside midfielder who uses the ball cleanly and can play multiple roles across the field. He provides run and carry and wins plenty of the ball, making good decisions. He has good all-round athleticism and while he could improve his tackling pressure and build more size to his light frame, he has a well-balanced game and was one of the most notable improvers for South Australia at the National Under 18 Championships. Expect him to push for top 30, but around this late second/early third is about right. A good pick who is a safe selection.

The brother of Brisbane’s Charlie, Cameron is an identical small forward with equally high footy nous and goal sense inside 50. He is further progressed than his brother was at the same age, and has improved at a rapid rate this season. His five-goal performance against Vic Country at GMHBA Stadium in the National Under 18 Championships put his name up in lights and he has not looked back, finishing the WAFL season in ripping form for Swan Districts, standing up in big games and continuing to deliver. While he is not a huge accumulator of the football, he knows how to hit the scoreboard and has a high impact per possession.

A much talked about member of the Brisbane Lions Academy, McFadyen was impressive at the National Under 18 Championships for the Allies. He has some great athletic traits, and his strength and sheer determination to beat his opponents are evident. McFadyen rotated between the midfield and forward at the championships, and that is what he will be expected to do at AFL level. The Lions rate him highly and he is their top prospect in the draft and they will happily match. Has some great upside to further show his athleticism on the field, and find more of the football on a consistent basis.

Bedford is an electrifying forward who can play through the midfield, and is one of the best for high impact plays. He is a natural match-winner with great acceleration and agility, and that keen eye for goals. He is a player that opposition defenders have to pay close attention to, otherwise he will make them pay. A member of the Melbourne Next Generation Academy, a bid should come after their first selection, so expect them to match it fairly comfortably. Still raw and needs to find more of the football on a consistent basis, but a nice foundation of skills to progress to the next level in the future.

A balanced midfield who has the hardness of an inside midfielder and the skills of an outside midfielder. He is undersized for an inside midfielder so expect him to spend more time on the outside and still apply his defensive pressure to the ball carrier. Will battle Luke Foley for the third Western Australian taken, with at least five expected to be selected in the top 40. Stack can play other roles and can hit the scoreboard, but his balance between offence and defence is the most impressive ability in his arsenal.

A Collingwood father-son selection, Kelly is a developing key position defender who has also spent time forward. He is more comfortable behind the ball and the Oakleigh Chargers centre-half back is a player who will join brother, Jake in the AFL. He has shot up on draft boards after a huge year having just played the one TAC Cup game last year. The Pies have prepared to match bids on him and Isaac Quaynor, and will do so when a bid – expected to be sometime in the second round – comes in. He will slot straight into Collingwood’s defence in the future once he adds to his build to compete against stronger forwards.

An omission from the initial Vic Country team, Smith has come on in leaps and bounds. His TAC Cup form was as good as anyone’s during the early part of the season, and he was rewarded with a call-up to Vic Country against Western Australia and was best on ground. From there, he earned a National Draft Combine invitation and showed off his top athleticism, in particular his vertical jump. A big-bodied inside midfielder, Smith is a fierce competitor and a player who teammates love to play alongside.