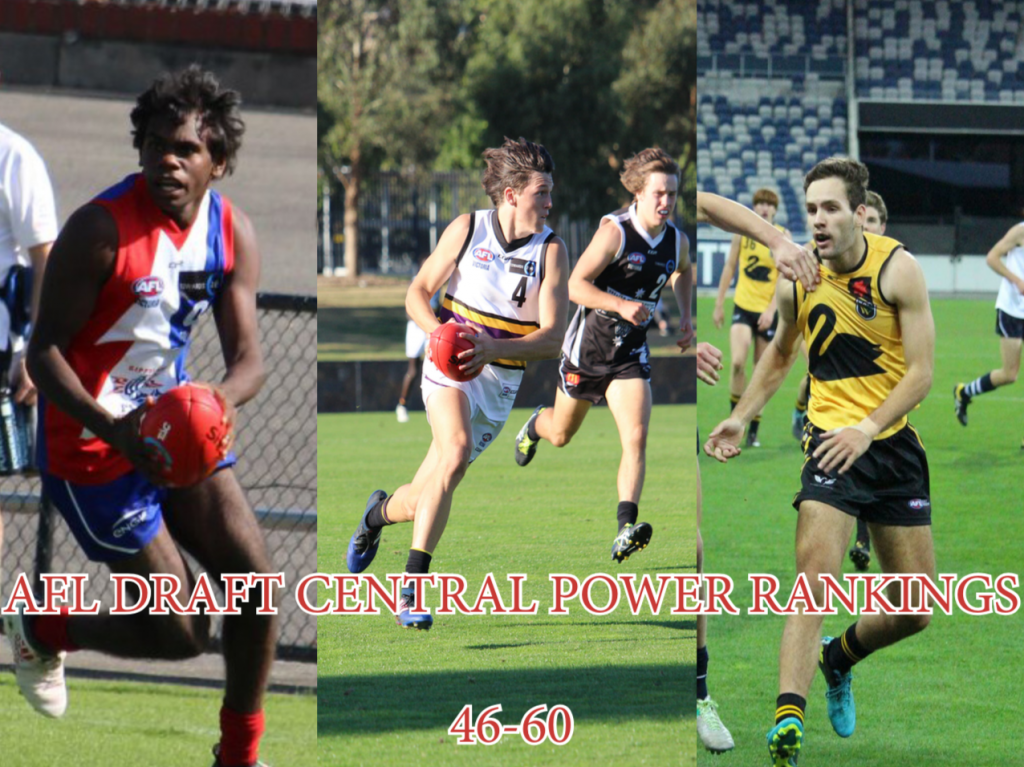 WITH just two weeks until the 2018 AFL National Draft, AFL Draft Central is counting down by naming our top 60 players to watch out for in the draft with our final Power Rankings for the year. We have extended it from 35 to 60 just to throw out some names that might have flown under the radar and might be great value late. It is no surprise this was a hard exercise, with as many as 20 others players coming forward as legitimately deserving a place on the list, such is the evenness towards the back-end of the draft. While even for us the top 60 would change regularly based on more discussions and re-watching footage, we take a look at our top 60, starting with the 46-60 players today. Remember this is purely opinion-based and does not take into consideration any particular team selections.

The ‘Pod’ kicks off our list because after missing out last year, he has gone back and worked on various areas that he might have lacked in – which included question marks over his ability to play as a full-time midfielder. He spent most of his top-age year playing more key position or third-tall roles rather than in the midfield, and in 2018, he became that midfielder that everyone at the Cannons knew he could be. He spent time in the VFL and impressed, while not losing his versatility to play anywhere on the ground. A great leader, good overhead, just slots into any side and could instantly improve the culture with his own standards and a player that certainly deserves a call-up.

Everyone talked about Geelong and Collingwood’s pick swap in the 50s as benefiting the Pies, but it also benefited the Cats, with the Geelong father-son selection of Brownless likely to occur sometime in the late 50s onwards. He lacks a yard of speed, but what he lacks in that area, he makes up for in almost unrivalled endurance. He can run all day long, and not only have an impact in the midfield, but up forward as well. Could end up more of a forward in his AFL career, as he has that unique goal sense and game smarts that gets him there.

A bit of an underrated player, Hanrahan offers great value later in the draft. The exciting forward has an impressive ability to impact a match inside 50, and does not need many touches to influence the contest. While he can be hot and cold at times, the brother of Hawthorn’s Ollie, has shown he has some draftable qualities. Classy, composed and an ability to move into the midfield and run off a wing, against his consistency, is something that recruiters will consider when weighing up whether to select Hanrahan. He will add a point of difference to a forward line, and has high upside for fans to look forward to in the future.

The tough, inside midfielder from East Fremantle did not get to show off his ability this year due to injury, but was rated as a solid third round choice – possibly higher with a good year – coming into 2018. While his size works against him for an inside midfielder at AFL level, he still represents great value, and is one of a number of players in this late bracket that could find a home despite having his most important footballing year ruined by injury. He has good speed, clean hands, great endurance and is one of the more professional players in the draft crop, so will be another who can slot straight in and do everything expected of him from day one.

Sparrow is a player who we have seen divide opinions as to where he falls in the draft, with his athleticism up there with the best of them, and just needing to iron out his kicking and decision making at times. He played mostly school football before returning to the South Adelaide Under 18s where he was as consistent as any other player in the competition. Sparrow has some great upside, and there’s certainly a lot to work with going forward, and like so many others here, is a top leader who will never let you down with his determination and leading by example.

The lightning younger brother of Brisbane Lions’ Jarrod, offers really unbelievable value here. Over the past 18 months, Berry has struggled to get on the park for continuity, and therefore slipped down the order. His kicking and decision making at times is rushed, but in terms of athletic capabilities there are few better. His agility and acceleration is elite, and he can play down back or up forward, but he is best suited to the inside midfield role. He has that breakaway speed that would see him burst out of a stoppage and leave his opponents behind which is always something fans love to see.

McKenzie has had a solid year playing TAC Cup and school football, and is that mid-range draft prospect who is still raw, but has some nice traits. He is likely to have found a nice role at half-back, using his kicking to advantage, along with his ability to set-up well and position himself for intercept marks. A very lightly built player, McKenzie can also play in the midfield, often on a wing with lightning pace that he does not often show in games – he clocked 2.9 seconds on the 20m sprint. Once he can really implement his athletic abilities to impact a contest, he will be all the more damaging.

A high impact per possession player, Ham over-age year was a massive improvement on past years, and is yet a third 19 year-old in this list that might get a second chance. Playing half-forward, half-back and on the wing, Ham is arguably the best athlete when taking into account speed, agility and endurance, with the Falcons utility in the top few across all the tests. He is still light so will need to bulk up a bit and iron out the kicking so it is a bit more consistent, but when he is up and about he is very damaging. He is a player that only needs a handful of touches to turn a match and he has the athletic capabilities to completely wear down an opponent and on that alone, he deserves a spot on this list.

It might be a bit strange to see the big man this far down after being so high initially, but as we see every year, rucks tend to drop towards November as the reality of whether or not talls are worth taking early continues to rage. As one of only a handful of genuine ruck talents, expect Bowman to land somewhere in the second half of the draft with some nice ruck work, but will be viewed as a long-term prospect. At times had a bit of an up-and-down year, but turned it on in the TAC Cup decider and was one of the best for the Stingrays, which gave clubs a huge indication of where he might fall.

A medium forward who plays taller than his 184cm, even though it looks at times as if a gust of wind might knock him over. Very light, Kemp has a great vertical leap, impressive closing speed, and an insatiable attack on the football and ball carrier. He does all the defensive things right which is what you want from any player, but especially a forward who is capable of a nice highlights package as well. Received the call-up from school football after an impressive season, then was very good for the Cannons in the final month. Knows where the goals are, and when he is not kicking them, he is trying to win the ball back.

Hawthorn fans have a beauty in ‘Mozzie’ with the exciting forward the kind of player that could walk away from a game with 10 touches and you go home thinking “gee how good was he?”. Mosquito’s clean ball use is about as good as you will see, with his ability to pick the ball off the deck in the wet like he has velcro hands is up there with the likes of Tarryn Thomas at the top of the charts. Like any small forward, Mosquito does need to work on his consistency, but he is a natural match winner who worries opponents whenever he gets near the football. Attacks both offensively and defensively with vigour and is not afraid to bring down much bigger opponents.

In the back half of the season, school footballers who did not get the call-up or choose not to play TAC Cup early in the season often throw on the jumper for the final month, and Reynolds is one of those. Not too dissimilar to Nathan Murphy the year before, Reynolds is that medium-tall utility who can play anywhere on the ground. Hailing from Brighton Grammar – the same school as Murphy – Reynolds is a nice kick of the football, and just knows how to find it. He is one of those dark horses of the draft that could be plucked out early given his scope for improvement.

Had it not been for an unfortunate sling tackle in the National Under 18 Championships, Vandermeer’s year could have been even better. To that point, the overager was looking as good as any other 1999-born player going around in the TAC Cup, and it earned him a place in Vic Country’s side. His run-and-carry, dare and dash really excited fans, and he is the type of player that just takes off and does not fear taking the game on. He wins a lot of the football and while he is predominantly an outside player, he uses his speed to also apply defensive pressure, and fiercely attacks the ball carrier. One who could go later or as a rookie, but the need for speed is great in modern football, and Vandermeer has that need in spades.

Rowbottom is the well-publicised nephew of ‘BT’ (Brian Taylor) and is another one of many inside midfielders in the draft crop. He has good speed and never takes a backwards step, being one of the top clearance midfielders in the TAC Cup. He wins it on the inside, spreads to the outside and just keeps plugging away all day long. Rowbottom needs to improve his endurance, but he has the talent to keep improving, and the dedication to make sure it happens. Another one who could easily go earlier should a club like what he has to offer, but expect him to be a mid-draft option and a player who could slide into a senior side fairly early on, with Rowbottom just needing to sharpen up his kicking a bit.

Not much has been said about the classy outside midfielder/small forward, but he earned a National Draft Combine invitation and is one of the players we rate as a mid-draft prospect. He just does a lot right and is a player who while undersized, is capable of being accountable for an opponent. He kicks goals and lays tackles, and can also move through the midfield with an ability to win the footy and drive it forward. He is not as quick as other small forwards, but he has fairly good evasion skills, and his ability to execute by hand or foot is impressive. Smallwood just seems like the type of player that clubs secretly want to drop and then call it a bargain later on, because he has some very draftable qualities.

Who were next in line?