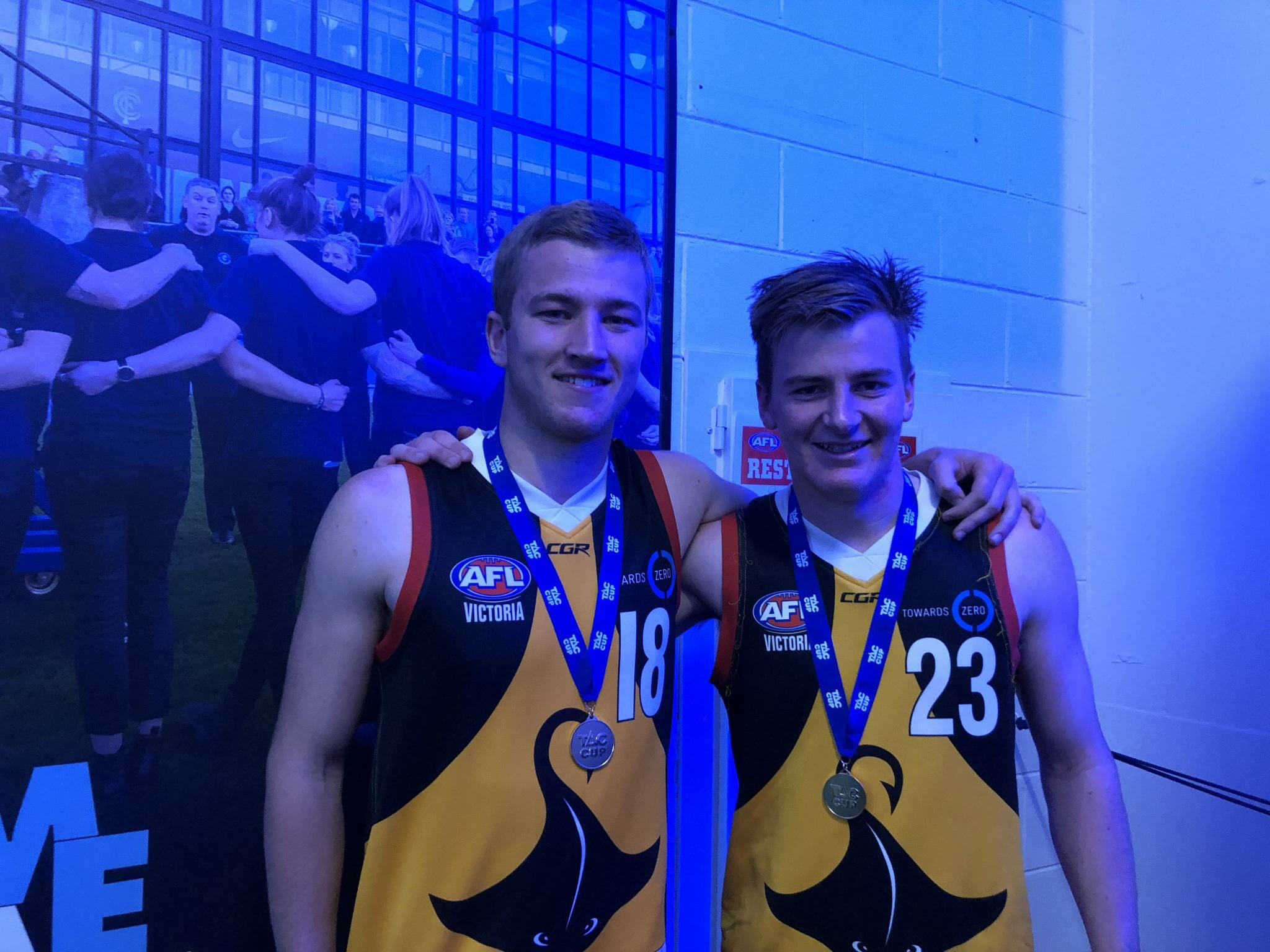 ONE could not feel his legs and the other felt like the final five minutes was a blur, but both Dandenong Stingrays co-captains, Campbell Hustwaite and Mitch Riordan could not hide their excitement and relief to finish the TAC Cup season as premiership players. The Stingrays “did it the hard way” but held on against a fast-finishing Oakleigh Chargers outfit to cap off a terrific 2018 season and take home the long-awaited premiership.

Hustwaite said it was a battle, but they were “ecstatic” that they had finally won the Stingrays’ first flag.

“Excitement,” he said of the feeling. “We didn’t do it the easy way, we made it hard on ourselves but from the start it was all about creating our own story and I think we did that, we just did it the hard way. “We’re ecstatic now, I just can’t believe it. “First premiership for Dandenong Stingrays; emotions are flowing but I just can’t believe it.”

The inside midfielder said he could barely move in the final few minutes such was the intensity of the contest.

“I felt like I was running on a treadmill most of the time, I couldn’t feel my legs,” Hustwaite said. “The last five minutes I just couldn’t get on the ground, I was trying really hard and I was knackered and the boys were able to do it just, but we got the job done so I’m pretty happy.”

Riordan said he was equally feeling it, knowing that final efforts in the dying moments could make or break history.

“It was a bloody blur,” he said. “The ball (was) bobbling around and we were just trying to stop the bleeding a little bit. “Just trying to just grind it out like we’ve been doing all year, but that’s when it goes back to training we’ve been putting ourselves under that pressure for ages so just fall back to those structures, and that hard work just came to the forefront, so I’m really proud of everyone’s efforts.”

Riordan has had his own personal setbacks this year through injury, missing the majority of the championships after injuring himself in the first game. He said the determination to fight back from injury was worth for this feeling.

“Bloody oath (it’s worth it),” he said. “I knew the team had something in us all year and with the hamstring and you just know you want to get back here because the boys are really special and we knew we had something special here this year and we could create our history. “So that’s why I kept showing up to training early just for days like this. “This time with all the boys, ‘Wheels’ (Mark Wheeler) and ‘Blacky’ (Craig Black).”

Riordan said the excitement in the rooms was unlike anything he had experienced before.

“It’s going off but you can understand, it’s been like a lid off the bottle for bloody 27 years,” he said. “It’s like Blacky said, we’ve had blokes from bloody 19 whatever to even last year. “The whole culture from the club has come together and it’s just a family together. We know that we had everyone in the stands behind us so that’s why we dug deep. I’m really excited and really happy for all the boys that they got to showcase their talent today.”

He said the likes of former Stingrays turned AFL players, Justin Leppitsch and Adam Treloar being around the boys on the day and their support through the public media had helped give the players confidence in the decider.

“Bloody oath, this isn’t just one year, this has been going on for 27, however long the Stingrays has been around,” Riordan said. Even ‘Leppa’ (Leppitsch) in the paper all the boys read that, we just know everyone behind us like Treloar last night saying (on television) he’d be down here. “It means a lot to everyone and we’re a family so the culture and everything, you just want to win for everyone, everyone who has been on the list.”

Hustwaite agreed that the players felt the wave of support from the Stingrays family, past and present.

“Yeah the culture’s awesome,” he said. “It’s not just one or two years of it being built up it’s been built up from the start and I think it’s very special to have all those past players to come in and share it. “We were tight with the blokes last year and unfortunately we were unable to get it but today it’s just emotions flowing throughout the whole room. “You can just see it on their faces, you put a smile on their faces and that’s what means the most to us players.”