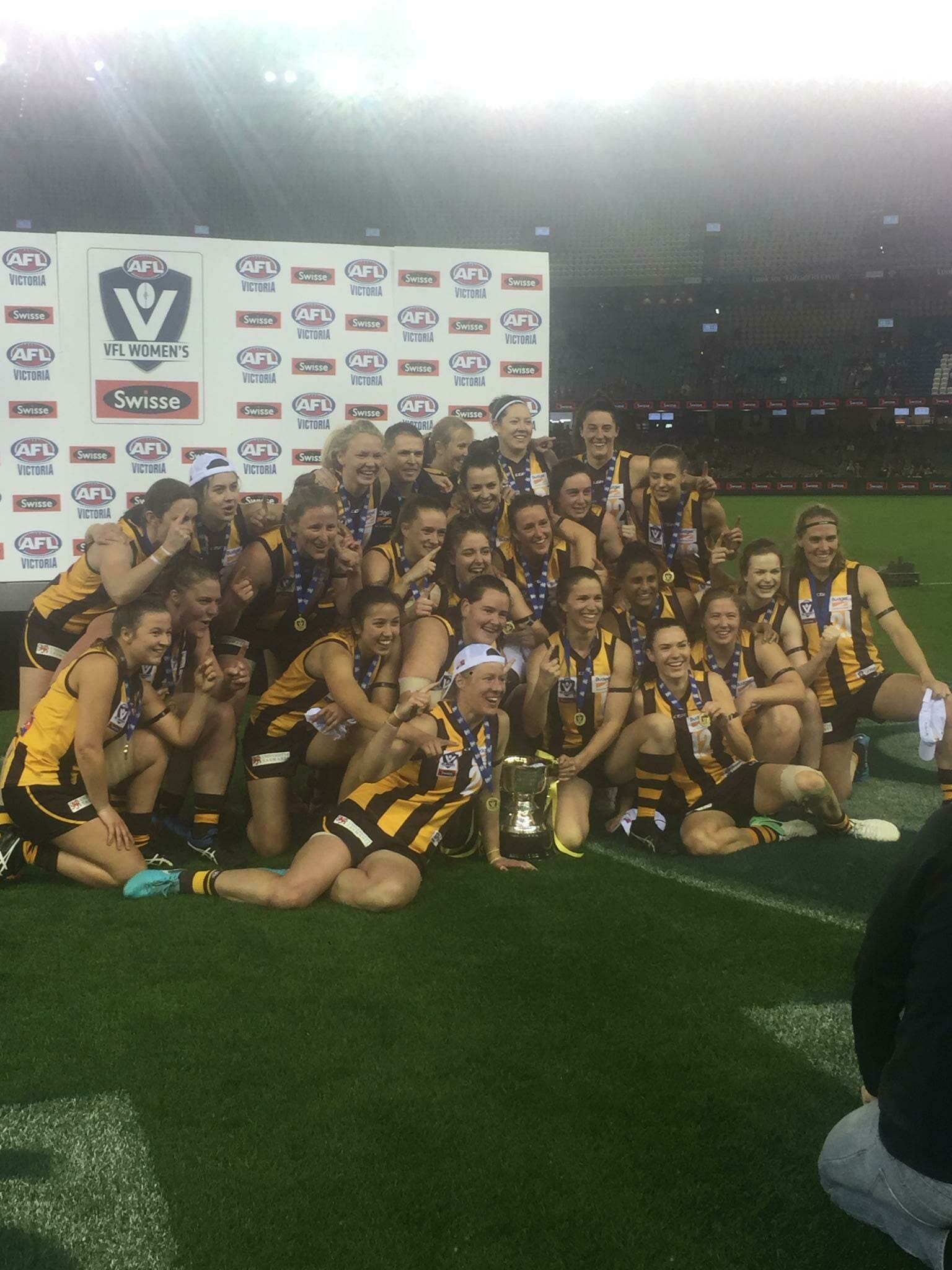 THE Hawks have made history in the Victorian Football League (VFL) Women’s league after an 11-point win over Geelong in the Grand Final.

Not only did the team lift up its first ever VFLW premiership cup, but it was also stalwarts of female football, Meg Hutchins, Lou Wotton and Phoebe McWilliams who got to experience premiership success for the first time.

If Geelong had won, Vic Country duo, Olivia Purcell and Nina Morrison would have been hot favourites to claim the best-on-ground accolade, and could have claimed it even though their side lost. Purcell gathered 19 disposals and a game-high 11 tackles while Morrison racked up 20 disposals and laid five tackles.

New Geelong AFL Women’s forward, McWilliams was up and about early, creating the first goal for her side. She marked the ball just outside 50 and kicked it to the top of the square where Tamara Luke marked and kicked truly for the Hawk’s first of the day. Geelong fought back with a strong goal-line tackle provided by ruck/forward, Maddie Boyd. Boyd dispossessed Hawthorn defender, Jessica Sibley and then booted through the Cats’ first major from a tough angle just outside the goal square. Despite a dominant first quarter for the Hawks, they matched their goal with four behinds, giving them a slim two-point lead at quarter time.

After two behinds from McWilliams and Meg Hutchins to kick off the second quarter, it was unsurprisingly captain, Emma Mackie who steadied the ship with a goal halfway through the term. At the other end, the Hawks’ defence kept Geelong scoreless for the quarter, giving them an 11-point lead at the main break.

The Cats tried to bounce back in the third term but wasted their opportunities. They finished the term goalless, with behinds from Hannah Burchell, Maighan Fogas, Danielle Orr and Mia-Rae Clifford. These wasted opportunities hurt more when Sarah Perkins kicked a major in the dying stages of the game. In the Hawks’ only inside 50 of the quarter, McWilliams was again involved with a long kick inside 50 ending up with Perkins. Perkins gathered the ball with two opponents hanging off her, yet still managed to grab it cleanly and snap it through for the Hawks’ third goal. This gave them a lead of 13 points at the last break, leaving Geelong with a lot of work to do in the last 20 minutes of the game.

The Cats responded immediately though, with a long kick from ruck/forward, Maddy McMahon ending up in the reliable hands of new Geelong AFL Women’s recruit, Kate Darby at the top of the square. She made no mistake from directly in front, reducing the deficit to seven points. But not long after, it was Hawthorn forward, Emily Gilder who kicked the sealer with a set-shot goal from about 25 metres out.

This ended the scoring for both sides, and meant that Hawthorn claimed one of the most historic 11-point wins in female football.