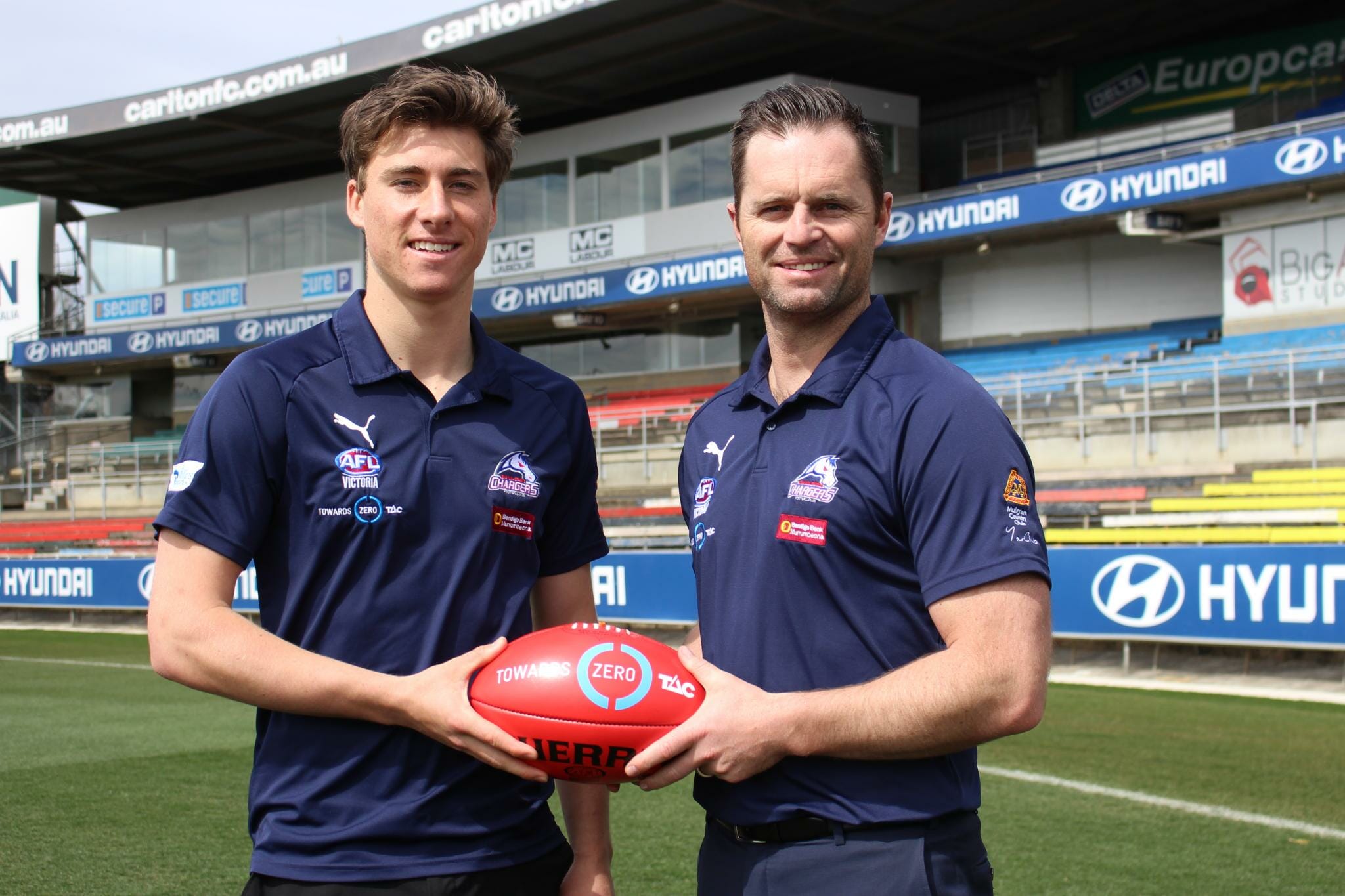 Clarke has endured a longer journey than most to come full circle at the helm of the Chargers, with a Peninsula league playing career, experience as both a strength and conditioning and line coach at the club, and as forward line coach with Richmond’s reserves.

Taking over from dual premiership coach Mick Stinear was never going to be an easy feat, but the talent of the Oakleigh squad speaks for itself, and Clarke revealed his troops all but coach themselves in driving a culture of success.

“Our boys have a really strong connection amongst each other so you can see in the previous couple of weeks they’ve shown that they’re really keen just to turn up,” Clarke said. “We don’t ask them to be perfect, but we certainly ask them to turn up and fix each other’s mistakes which are going to come often in a game of footy. “So yeah they really drive the culture and that connection that we keep getting back to… and they’re a very easy group to coach.”

Oakleigh has been in irresistible form over the last three weeks, with an average winning margin of 101 points seeing them poised better than almost any side in recent memory coming into an Under 18 decider. Clarke is well aware of their recent credentials, but considering the opposition, is keeping a lid on it.

“We’re feeling quietly confident, I think on the back of our wins we just keep playing our way whether it’s five points or 95 points,” he said. “We’ve been really proud of the boys, they’ve been able to continue to play for four quarters of footy throughout the last two weeks and they haven’t dropped off, which is what we’ve challenged them on is to be able to play four times 25 minutes and we’ll need to do that again this week.”

Dandenong have been the benchmark team all year though, and despite being the only side to overcome the ‘Rays this season, Clarke is still wary and respectful of his side’s opposition having also suffered a loss at their hands.

“I’m sure (Craig Black) isn’t planning to lose and we’re not planning to lose either,” he said. “They’ve had a great year consistently and to finish on top is a real credit to ‘Blacky’ and the program they run out there. “Ours has probably ebbed and flowed a little bit, charting through the year but coming into form in the last month… I’m sure both regions just hope it’s injury-free, that everything goes to course and it’s a good sign of 23 talented kids verses 23 talented kids.”

The strength of the Stingrays has undoubtedly been their aerial dominance, with an array of highly talented ruck and forwards, as well as big bodied medium players who can intercept well off half back. Despite being focussed on his own side’s progression and top four aspirations, Clarke inevitably had an eye on Dandenong’s heroics and key threats.

“You’re well aware throughout the year of each other’s wins, losses and who’s playing well, so in terms of what we focus on, we’re more focussed on what we’re doing but yeah you’re right there are some key players that we’ll have to match for height or find a better way of doing it,” Clarke said. “They’ll present with that height… we believe we’ve got the match-ups to go with them, which ultimately just gives you a chance to see the best talent and the best defenders play on the best forwards.”

But with all of the opposition’s talent comes Oakleigh’s undeniable ability, too, with a number of players showing notable improvement throughout the year around the outstanding seasons from each of their recognised stars. Clarke noted the how Collingwood father-son Will Kelly has come on leaps and bounds, while the likes of Collingwood Next Generation Academy prospects Bailey Wraith and Isaac Quaynor have continued to learn, grow, and drive standards.

All of the above have been led by over-ager Noah Answerth, who holds a special connection to TAC Cup grand finals. Having had his top age year marred by a freak back injury, the rebounding half-back has returned to the level hoped of him and has the opportunity to follow in his brother Kade’s footsteps in lifting the trophy aloft.

He is keen to match it against the best and gain reward for effort. “They’re a pretty good team all-round, they wouldn’t be in the Grand Final if they weren’t,” Answerth said. “So, we haven’t really looked at match-ups yet but we have one on ones all around the ground, we’ll find out at the end of the day.”

While favouritism has changed hands throughout the week and depending on who you ask, it is certain that this is as enthralling a grand final match up as we’ve seen in recent memory.

On Saturday, the season’s best will be crowned, with Clarke hoping his Chargers can continue to storm home and continue Dandenong’s grand final wobbles.