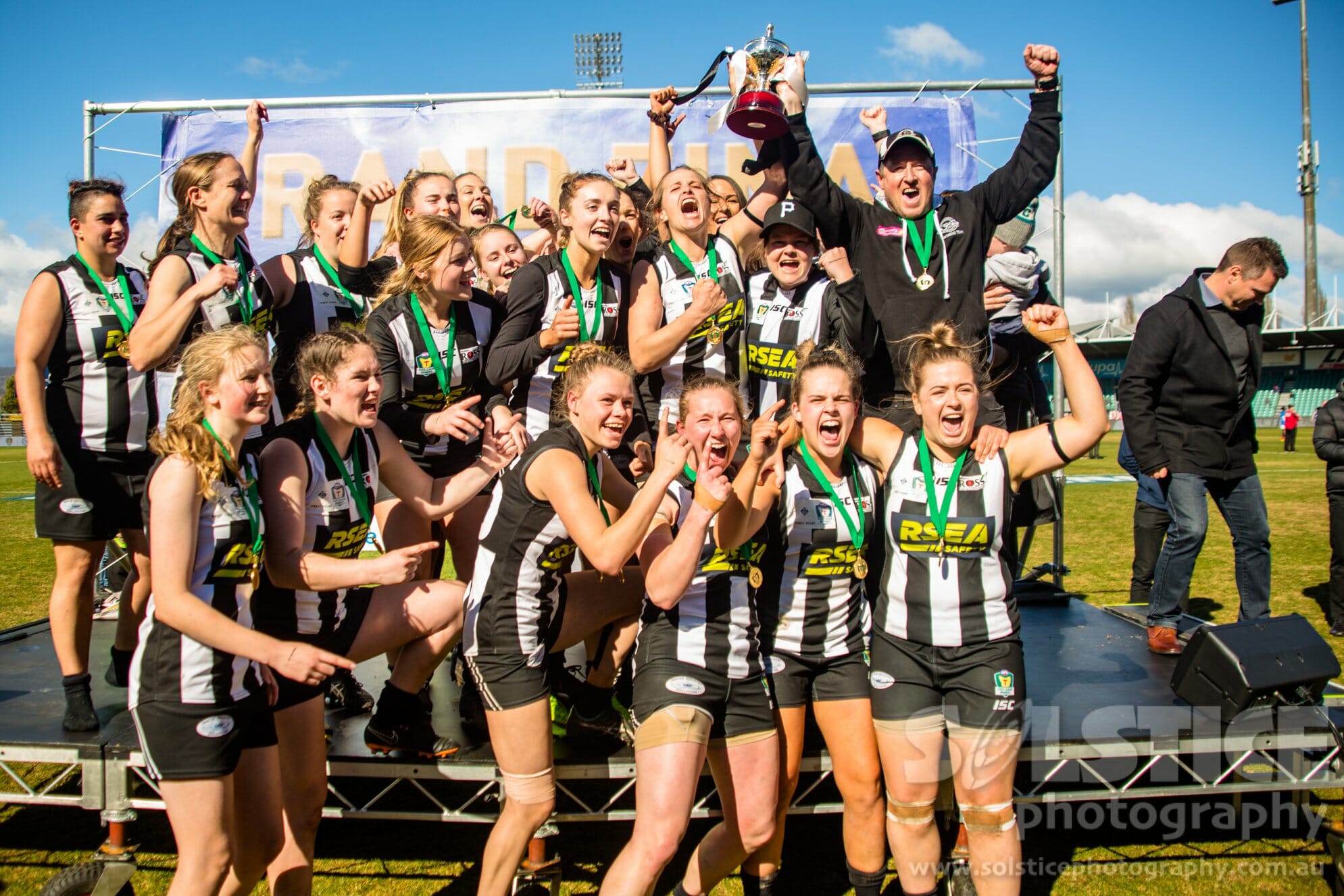 GLENORCHY has claimed a thrilling two-point win the Tasmanian State League (TSL) Women’s Grand Final, seeking revenge on Clarence, the side that upset the minor premiers in the semi-finals.

Macklyn Sutcliffe was the star of the day for the Magpies, kicking Glenorchy’s first and last goal of the game to win the best-on-ground medal. It was goal-for-goal throughout but Glenorchy managed to get on top in the last quarter, outscoring the Roos two goals to none.

Clarence’s Jacinta Limbrick kicked off the scoring for the day with a beautiful set shot kick from about 40 metres out. The Magpies hit back right away through Sutcliffe, who took a great sliding mark, played on and kicked a booming long-range goal. Elise Barwick then gave Glenorchy the lead for the first time when she earned a free kick close to goal and made no mistake. Just like the first goal, it was a quick response from the opposition, as Clarence got the quick reply through an open kick inside 50. Limbrick was on the end of it, getting her foot to the ball in the goal square. This gave the Roos a slim two-point lead at the first break.

They kept their momentum going in the second quarter, when vice-captain, Nicole Bresnehan picked up a loose ball inside 50 and sped towards goal. In the classic goal-for-goal fashion of the game, the Magpies hit back in an instant, with Sandy Eaton crumbing off a Nietta Lynch spilled mark in the goal square. This reduced the Magpies’ deficit to two points. The scoring dried up at the end of the quarter, with neither team scoring a goal for 12 minutes. This meant that Clarence went into the main break with the same margin as it had in the first break.

To begin the third quarter, Glenorchy opened up the scoring through an Barwick kick inside 50, which Hannah Smith ran onto out the back, slotting through the major. The Roos fought right back in the seesawing contest, with North Melbourne recruit, Maddison Smith kicking a great set shot major from just inside 50. Smith ended up being a game-changer for the Roos, kicking her second goal in a couple of minutes. In an inside 50 stoppage in front of goal, she read the tap perfectly and ran into goal for her second of the day. This gave her side a 10-point lead, which it took into three quarter time.

In the fourth term, it was all Glenorchy, as the Magpies kept their opposition goalless. Natalie Daniels kicked off the scoring for the Magpies in the term, with an in-and-under hard-ball get resulting in a key major. Then, Darcy Elliston missed a crucial set shot at the other end for the Roos and Sutcliffe made her pay. Sutcliffe received a handball on the run from Daniels and kicked her second major to put the Magpies in front by a solitary point. Her side was able to hold on for the rest of the match, kicking a late behind to win the thrilling decider by two points.