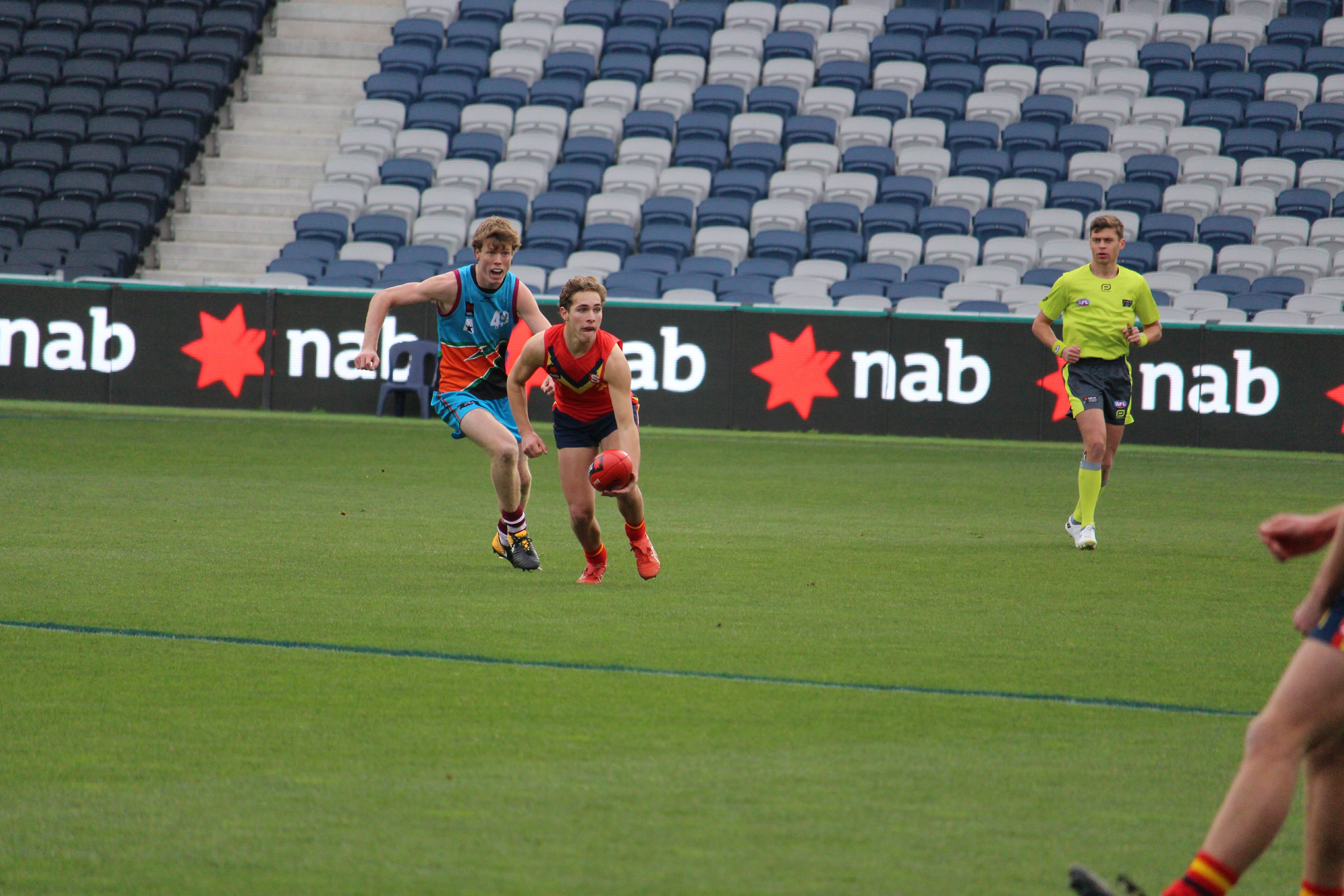 TO SAY the last two weeks have been some of the biggest in South Australian National Football League (SANFL) history would be an understatement. The recent events have put SANFL back in the headlines and no doubt a focus also back onto local talent. We recap the last two weeks of games across the SANFL and look closely at key South Australian draft talent in these games.

North Adelaide performed a demolition job on Sturt to end the Double Blues season with a 58-point win. It was an all round team performance for the Roosters, with Aidan Tropiano, ex-Crow Keenan Ramsey and Lewis Hender all leading the way. The young talent of the Roosters also shone through with top 10 prospect Connor Rozee playing his best game for the year, finishing with 24 disposals and 10 marks while his Under 18 teammate Boyd Woodcock hit the scoreboard with two goals and three score assists to break into the best as well.

It was a tight tussle for the Eagles and Norwood, but Norwood held on to finish with a 17-point victory. Anthony Wilson and dual Magarey Medalist Mitch Grigg shone for Norwood. For the Eagles, high draft talent Jack Lukosius battled on to finish with one goal and a score assist from 13 disposals and six marks in a tight contested game. His work rate all day was impressive.

There is no other way to describe this game during and after as unbelievable, and one that will etch itself in SANFL history for so many reasons.

The game was dominated in the first half by the Eagles, who were leading by 29 points at half-time and up to 47 points early into the third quarter. Then North rattled off 13 of the next 14 goals in a stunning comeback. Key players Keenan Ramsey and Lewis Hender again were dominant, but certainly the last quarter from youngster Boyd Woodcock helped his team to victory. Three goals in the last quarter was an incredible spark from the youngster and he put his name in front of the recruiters, performing so well in a preliminary final. He finished with 12 possession, seven tackles and three goals. Fellow Under-18 talent Connor Rozee was a bit quiet early, but again found his form late to take some telling marks and be clean with the ball, including a screamer on the wing when the Eagles were coming. This finals series for Rozee has surely cemented him into the top 10 potential now with consistent and best performances for the year all in cut throat finals.

Eagle Jack Lukosius again finished with one goal from limited opportunities as his Eagles team couldn’t get their hands on the footy in the second half.

It was truly an incredible post match Preliminary Final and aftermath this week for SANFL footy. Despite North’s incredible win, it was found that they had 19 players on the field in the last quarter for 3 minutes 39 seconds. Nothing was addressed during the game, and in the post match raised immediately creating a storm of controversy and debate.

The 19th man rule is archaic and cumbersome, and SANFL officials sent the ruling to the Tribunal to make a decision on the interpretation of the rule. The final result from the Tribunal was to allow the victory to North Adelaide to stand, but a $10,000 fine and removal of four points in 2019 to be imposed.

The debate has raged over the result and arguments on both sides as to how the rule should work. The SANFL rule differs from the AFL rule on the 19th man, which no doubt will now be reviewed and changed to avoid the incident in the future.

Norwood will face off against North Adelaide in this week’s Grand Final. It will be an exciting game as Norwood have dominated all year, and North have reached the Grand Final from fifth position. The game will have plenty of attention after the “19th man saga” but Norwood will start clear favourites.

Centrals defeated Glenelg in the first semi final by six points in a nail-biter. The class of Centrals stood up with its young Under 18s talent of Jackson Hately, Jez McLennan and Aaron Neitschke leading the way for the Bulldogs all game. For Glenelg it was 17 year-old Brady Searle who shone for the Bays with a three goal and 23 possession game showing he will be one to watch in 2019. Will Gould finished up with six marks in his usual role.

In the other Semi Final, Norwood went down to North in a surprise result by 14 points. Liam Verity lead the way with four goals and forwards Frank Szekely and Oscar Chapman both finished with a goal.

Norwood managed to hold on to overcome Centrals by seven points, with the Bulldogs coming home strong in the second half. The older experience of Norwood’s team was clear as they survived the last quarter burst from Centrals. Zac Richards helped steer Norwood to victory while the young guns from Central, especially defender McLennan gave their all.

It is the Norwood vs North Adelaide double now with both teams competing on Grand Final Day in Reserves and League in what will be a cracking game. North defeated Norwood only two weeks ago, but Norwood will also start favourite in this game with their experienced line up

The clash between Norwood and South was a cracker with South securing victory by five points. The key playmakers for South in Luke Bogle (31 disposals, 10 clearances) Tom Sparrow (25 disposals, 11 tackles) and forward Daniel Sladojevic (three goals) helped their team achieve the win. Norwood’s young talent of 2019 prospects Cameron Taheny and Dylan Stephens tried hard to get their team over the line. Stephens has found plenty of the ball in the finals and finished with a game high 35 disposals to add to his 28 last week.

Having been the two best sides all year, the Eagles took on South in an epic Grand Final, with the Eagles clinching a victory by five points. The Eagles had been favourite all year to take the title, but South certainly showed they were up for the challenge in high quality game.

There was plenty of talent on show in this game and Eagle Jackson Mead (son of Darren) shone in this game finishing with four goals and 21 disposals to finish with the Alan Stewart best afield medal. Key playmakers in Kai Pudney (32 disposals) and Jarrod Miller (17 disposals) were among the best for the Eagles all day. South’s Sparrow never gave in and had another outstanding game with 12 clearances and 25 disposals while forward Jake Tarca jagged four goals. Hayden Sampson and Bogle again made impressive contributions for the Panthers despite the narrow loss.

Some key award winners announced over the past few weeks from the young talent include: