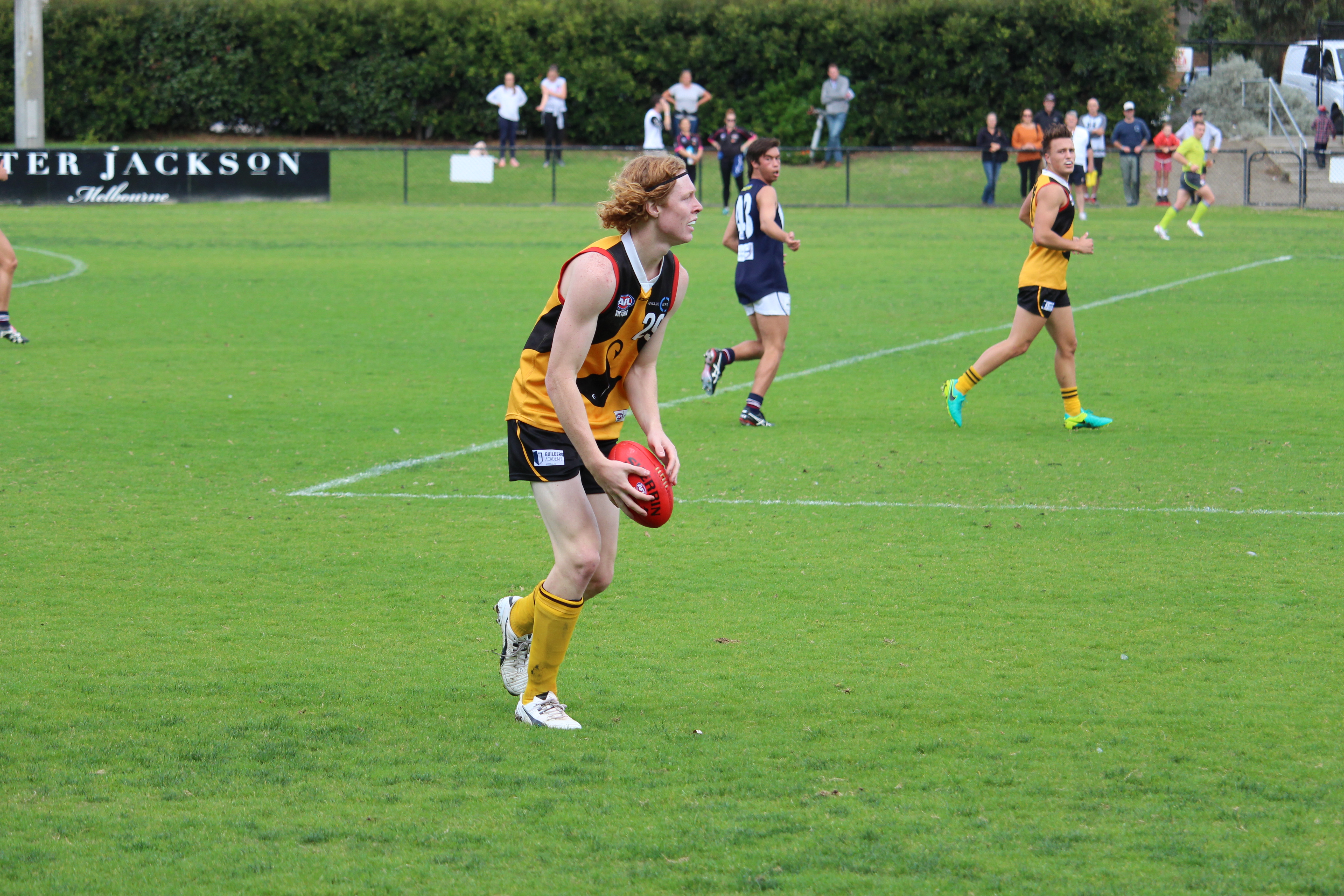 The Dandenong Stingrays took out the resilient Sandringham Dragons by 42 points to earn their rightful place in next week’s Grand Final against the Oakleigh Chargers.

Despite playing against potential top five pick Ben King, Bailey Williams was easily the most dominant key forward on the day.

Williams first caught eyes in 2017 after some impressive showings for Dandenong Stingrays, earning a position in the Vic Country side as a bottom-ager. He mostly played in the ruck, which he has continued to improve on in 2018. His supreme running leap coupled with great strength was often too much for his opponents in the ruck, but despite this Williams has proved more valuable as a forward than a ruckman. Picked in the AFL Draft Central TAC Cup Team of the Year as forward pocket, and TAC Cup Team of the Year as ruckman, for both his size and position, Williams offers great versatility.

Williams has had a rough trot in front of goal since the Under 18 National Championships, struggling to convert off his set shot. Though this is likely more of a confidence issue than anything to do with his ability, finding himself in a bit of a funk. Before the Championships, his set shot was not brought into question. In Round Four, he kicked seven against the Western Jets. This was also around the time he was pegged within the top 10 of the AFL Draft Central Power Rankings. Though since of some his smaller issues, he sits twelfth. On the run, with players hanging off him, around the body – Williams will convert. He is a multi-dimensional player who marks well, plays low, applies intense pressure and can continue to have an impact up the ground, and that is exactly the kind of forward modern AFL sides look for.

Though originally named in the ruck, Williams found his way down forward for the first quarter. He got around a lot of the early kicks inside 50 but none really sat to his advantage. He got his first hands on the footy off a boundary throw-in, winning the hit-out but was unlucky not to have his work converted. Later in the game, Williams dropped a chest mark after leading up into the midfield. He followed up by working back onto the ball and managing to gain possession and free it from under a tackle. Assigned to the ruck contests up forward, Williams won a hit-out in the square, followed it up with a tackle to dispossess but the ball spilled to the Dragons’ advantage. Though after a hit-out in a similar spot soon after, Williams won a ruck contest over the back of his opponent which quickly converted into a goal. Off a quick chip kick, Williams took a brave mark overhead running into Dragons defence, which he followed up with a good set-shot goal, landing his first for the day. He later found himself on the other end of the ground, knocking the ball over the line for a behind and soon followed up by applying intense pressure to the Dragons’ forwards, gaining a possession and diving onto the footy to help disrupt a run on goal, forcing a behind. Williams continued to stand up in the ruck, contributing greatly to the one-sided affair. After winning two hit-outs in the centre which quickly resulted in stoppages, Williams flew high to thump the ball far from the pack of players into the hands of Zac Foot who sent it inside 50. Towards the end of the quarter Williams saw more time in the ruck. He rarely failed to get first hands to it, using his strength and incredible leap to shadow his opponent, but his hitouts became very contentious for the players below him, seldom hitting a man on the full.

Williams started in the ruck after an impressive showing in the first. In his first contest he got bodied off the ball by James Rendell, with either of them barely getting a hand to it. The pair continued to display a strong contest under the footy, with Rendell using his positioning and Williams his athleticism to win the hitouts. Rendell later pinned Williams in a tackle and earned a free for holding the ball. After that, Williams found his way forward where he quickly began to flourish again. After being taken on as the Dragons attempted to rebound, Williams kept his man and switched quickly as they dished off the footy. He forced the defenders to rush their disposal which resulted in a turnover, a return inside 50 and subsequent goal. Tagged heavily in the marking contest, Williams took a big knee in the back under the football but was the first to regain his feet in the pack. His work in the ruck early on, involved a bit more wrestling than tap downs. For both ruckman there were very few hitouts to advantage, so despite being on the ball more, Williams’ impact was much lesser than the first.

For the third, Williams started on the bench but surged back on come the three-minute mark. Again, sticking to his forward role, the ball came his way twice, but unfortunately not to his advantage. The day’s windy conditions impacted a lot of inside 50s, so the kicks forward for both teams suffered. The second kick inside 50 found its way to the boundary line where Williams got to show his skill in the ruck contest. He won the hit-out, collected his own football off the deck and followed up with a snap at goal but missed. Williams continued to have trouble hitting his man from the ruck contest but getting first hand to the football was easy enough for him. Similarly to his first ruck contest for the quarter, he outmuscled his opponent to win the tap down, collect his own footy and again snap at goal. Like the first, he missed but continued to make these opportunities for himself. Williams later went up for a mark inside 50, knocked it in front of him, followed up and handballed to Toby Bedford who kicked a brilliant goal. The big man very rarely lost a one-on-one contest, using his second efforts to pin his opponent if they tried to break away. Williams’ highlight for the quarter came after the two defenders tagging him collided, allowing the forward to scoop and handball over his shoulder to the goal square, resulting in a run on goal. Great vision and clever football. He later followed up by marking the footy among three Dragons defenders, but missed his set shot on goal against the wind. This made for three behinds for the quarter but allowing himself these opportunities at goal with a couple of defenders following him around was impressive.

Williams sought to correct his mistakes from the third quarter early on. He proved too strong in the marking contest, earning a set shot at goal 20 metres in front. The big man kicked his second for the day and dwindled Sandringham’s hopes of a comeback. If that was not enough, Williams followed up by kicking Dandenong’s next goal after losing his man running toward goal. As the game continued, the Dragon defenders relieved a lot of their pressure, allowing the Stingrays to take a lot of uncontested marks in the forward 50. Williams could have seen himself under a lot but would have had to collected his own teammates to do it. His final highlight for the day was not bowling over teammate, Finlay Bayne, on the boundary line as the pair ran toward the high ball.

Williams is likely a first round pick, being the most dominant tall in Victoria after Ben King and Max King. The big man could be taken somewhere between 15-25 but could go earlier if he fits a team’s criteria. He still has a game left to lift his stocks, so anything is on the cards until the cup gets lifted.