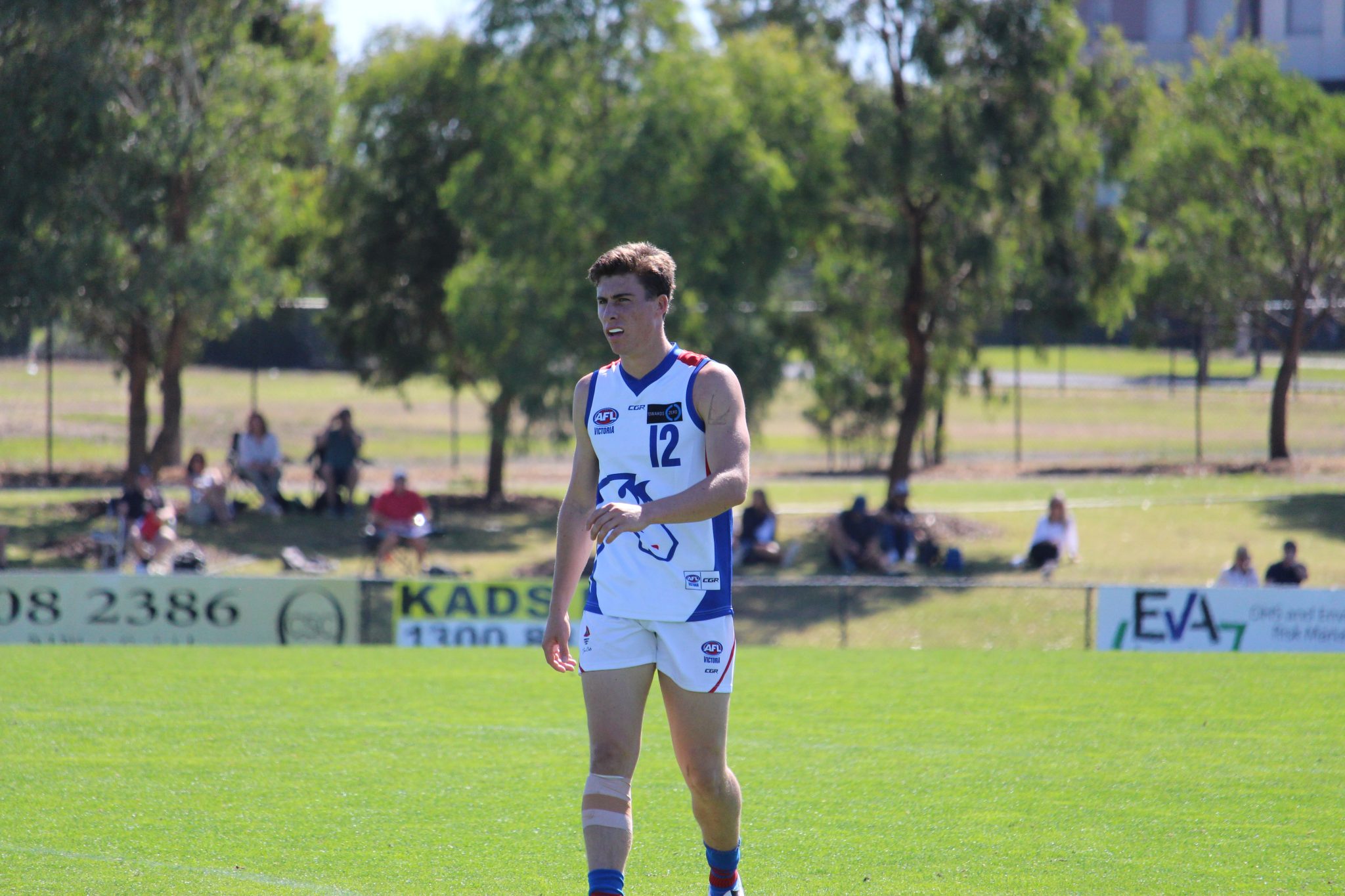 THREE years ago, Kade Answerth’s 30 disposals, 10 clearances and six marks helped Oakleigh Chargers to a two-goal TAC Cup Grand Final victory, their second in as many years. On Saturday, younger brother Noah will lead his Chargers out in hope of following in the footsteps of the now Sandringham co-captain and lifting the same trophy his brother once did.

Answerth’s path to the big dance hasn’t been easy, with the 19-year old’s 2017 top-age year ruined by a freak back injury. Not to be deterred, the rebounding half-back was invited back for another crack at the TAC Cup level having grasped the success of his brother’s over-age season in 2015.

Speaking at the TAC Cup Grand Final press conference, Answerth said despite the similarities between his and Kade’s paths, he is not feeling any pressure to match his brother’s feats.

“(Kade) probably played in two in a row, so he’s probably got one-up on me,” he said. “You go into his room and he’s got a bit of memorabilia in there, it probably gets me a bit more excited than I would be if he hadn’t done that.”

Having bounced back to play 13 TAC Cup games this year, Answerth expressed his satisfaction in being able to reach such a big stage with his mates in tow.

“It’s pretty surreal to be sitting here now, thinking I’m about to play in that Grand Final, I didn’t probably think last year that it would happen so I’m pretty excited,” Answerth said.

Oakleigh coach Leigh Clarke spoke of his pride in being a part of Answerth’s journey to get to this point, having visited him in hospital the day after his defining injury last year.

“It’s a wonderful story that Noah’s been able to get himself back,” Clarke said. “12 months ago after my second game and I’m visiting a player laying on his back in hospital on Monday morning. “To be here today with him, I’m proud of him and I know his family’s very proud of him as well.”

Oakleigh’s opponents, Dandenong have been the benchmark team all year, but the Chargers’ irresistible form of late sets the contest up as potentially being one of the best match-ups in recent TAC Cup history. Answerth says the Chargers are well aware of the Stingrays’ talent across the board, with the usual emphasis on individual match-ups taking a back seat.

“They’re a pretty good team all-round, they wouldn’t be in the Grand Final if they weren’t. “So we haven’t really looked at match-ups yet but we have one on ones all around the ground, we’ll find out at the end of the day.”

His opposing co-captain Campbell Hustwaite took a similarly respectful stance, highlighting the importance of a team effort in order to nullify Oakleigh’s spread of quality.

“I don’t see one match-up specific for me but I know that they’ve got five quality midfielders and talent all around the ground so we’ll be looking to challenge ourselves for the whole day,” Hustwaite said. “We learned in round five you can’t lapse for a few minutes because they will make you pay, so on the weekend it’s just all about nullifying their talent and backing ourselves in against their mids.”

That round five game loss stands as the only blight on Dandenong’s season, with the ‘Rays bouncing back in Round Nine to even the ledger between the two sides. Despite Dandenong’s clear and admirable consistency, the question of who comes in as favourite remains up for debate with Oakleigh riding the wave of a 101-point average winning margin over the last three weeks.

Coach Clarke is not buying in to the debate, saying his side is purely focussed on delivering a win and showcasing the talent of 46 young stars, but admits they may just be peaking at the right time.

“I’m sure (Craig Black) isn’t planning to lose and we’re not planning to lose either,” Clarke said. “They’ve had a great year consistently and to finish on top is a real credit to ‘Blacky’ and the program they run out there. “Ours has probably ebbed and flowed a little bit, charting through the year but coming into form in the last month… I’m sure both regions just hope it’s injury-free, that everything goes to course and it’s a good sign of 23 talented kids verses 23 talented kids.”

As one of those talented kids, Answerth held a steely, reserved sense of calm in saying this week is like any other on the calendar, despite conceding it’s special enough to warrant a few days off work.

“We train Monday, Tuesday, Thursday and keep it the same as any other week through the year. “I’m pretty lucky to have a good boss so I can come here today, I’ll probably work tomorrow and the next day and take Friday off again so I’m pretty lucky with the boss I have at work and I’m pretty thankful that he can let me have a few days off just for this week.”

Having already experienced the thrill of the big day through junior footy and his brother’s exploits, Answerth is hoping to add another premiership medal to his collection.

“I just played in (a premiership) a few years ago when I was 16 for Caulfield Grammarians in the 19’s, probably just two at Caulfield Bears,” he said. “That’s about it but I’ve been lucky enough to go to a few TAC Cup grand finals and experience it with my family and Oakleigh Chargers as well so it’s a great week… we can really enjoy it and finish off the year well.”

And with big occasions come big performances, with Answerth highlighting a few teammates that like himself, have come on great journeys to reach the holy grail.

“Clarkey’s already spoken about a few but for me it’s probably Lachie Harry,” Answerth said. “Last time we played the Stingrays he kicked a goal to win us the game I was really proud of him and his performance throughout the year. “The reason we’re sitting in a grand final is because of the efforts like him and other players… also James Jordan, coming from Caulfield Grammar school footy to come play with us play in a grand final, it’s been great to see his form leading into this week.”

Oakleigh will be looking to claim their fifth TAC Cup title when they battle Dandenong at Ikon Park on Saturday.

For the Answerths, a third premiership medal and second best-afield award could also be coming home.