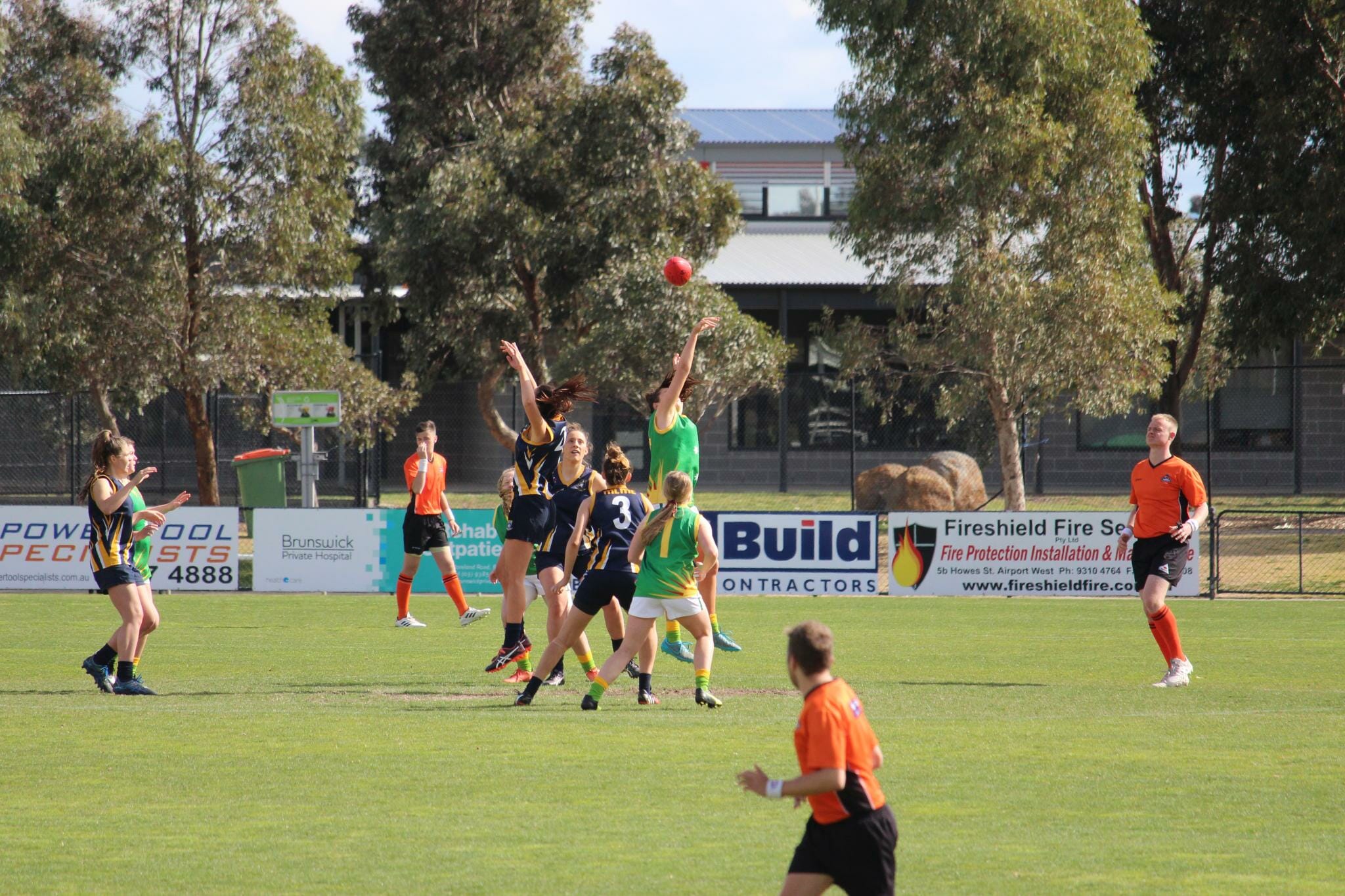 MT Lilydale Mercy College has taken out the Division 2 Senior Girls Herald Sun Shield, with a comprehensive 65-point victory over MacKillop Catholic Regional College in an east meets west battle between the two schools. Mt Lilydale reached the grand final after defeating St Francis Xavier College in the semi-final, while at the same time, MacKillop got the better of Loyola College in the other semi-final.

In the grand final, Mt Lilydale dominated early proceedings with some important clearances and Bridget Deed putting on a show up forward. She converted one from the set shot and one from a snap as most of the play was in Lilydale’s end. Western Jets defender, Mary Daw was doing her best with some rebounds and tasked with kicking out, but the Mt Lilydale attack was set up well, holding firm around the 50m line. Mt Lilydale’s Lilly Kelly almost kicked an amazing goal, fending off a couple of players before charging to have a shot, but just missed. Mt Lilydale peppered the goals as they were dominating play, but they struggled to convert kicking three straight to begin with.

Mt Lilydale got the first of the second term as the rain began to bucket down despite some blue skies on the horizon. MacKillop looked impressive when going forward as Rachel Kerr backed herself to charge forward, and Hayley Cran took a strong intercept mark. The weather was causing all sorts of issues with the slippery ball making it difficult for players to control. With the breeze blowing towards the MacKillop end, Mt Lilydale’s defence was standing up restricting the score. Then, as it looked like it was tough to kick into the breeze, Serena Gibbs took a strong intercept mark at the forward 50 and delivered lace out to Deed. Her shot hit the post, but from the kick-out, Mt Lilydale had another chance with Gibbs winning it again and goaling from long range.

With the ball locked in Mt Lilydale’s forward 50 for the last minute, it took some good work from Hayley Stevens and Jessica Fealy to clear the ball out of the back half as the siren sounded to avoid conceding a sixth goal.

With the sun now out and shining but the strong breeze still blowing, the teams came back from half-time hoping to gain an early advantage. A good intercept mark by Eliza Moodie topped one attack, but the pace off the mark from Kelly saw her drill a goal from 20m out without any problems for Mt Lilydale’s first of the term.

Just as it looked like Gibbs might have an opportunity, a big tackle from Cran earned MacKillop a free kick. Gibbs soon had another chance however, receiving the handball from Lilly Kelly , but Gibbs’ shot just went wide with the breeze. A big inside 50 by Jessie Williams after turning out of trouble looked good, but the work of Chelsea Jansen to Cran who gave it to Kerr saw MacKillop gain some important distance and go to half-forward.

Both sides’ attack on the ball was impressive in the challenging conditions. Jansen’s work in defence for MacKillop was impressive providing some drive coming off half-aback, while a nice kick from Deed going into Gibbs tight on the boundary set up a chance, but she centred it. A great tackle from Matilda Kelly at the fall of the ball was rewarded with a freekick, and Sophia Zappia almost kicked a goal on the line but was rushed through by Daw.

Lilly Kelly took a good diving mark and had another chance but it drifted off the boot and a quick kick off the ground saw another behind for Mt Lilydale. A quick snap from Sidney Arthur almost resulted in a goal, but it too went wide, but Mt Lilydale had all the ascendancy despite some strong tackles from MacKillop. Then some great composure from Deed saw her kick another, calmly picking it off the deck 20m out and then off a step slotting it home for Mt Lilydale’s seventh of the contest and the margin was out to 52 points.

Daw had another big rebound out of the back 50 after a quick kick inside. MacKillop were trying to move the ball fast down the other end with a minute remaining on the clock. It was to no avail in the end as Lilydale’s defenders locked the ball up on the wing and ensured they went into the final break with the substantial lead.

A strong tackle by Gibbs early in the final quarter showed Mt Lilydale’s intent to run the game out was still there. Gibbs was impressive all over the ground using her strength and penetrating kick to go long inside the forward 50. The set shot from Jess Duff 20m out in the seventh minute showed just how much wind there was, starting right and blowing right to the left, but going in for the first of the term.

Another massive clearance and inside 50 from Gibbs was intercepted by Daw who had been steadfast in defence. MacKillop was doing well to retain possession and Daw had run to half-forward to try and break the game open. The tackling pressure from the Mt Lilydale side was immense however as they refused to concede any sort of score.

MacKillop’s Piper Turner was doing well in defence with a few good marks, while Matilda Kelly’s intercept and long kick deep saw Talia Carusi have a chance. She was dragged off the footy and for her troubles she earned a free kick in the goal square and converted for Mt Lilydale’s ninth major of the game. Turner continued to stand tall taking another big intercept mark as MacKillop charged forward in the final minute. But alas, any hope of a score was soon diminished as Mt Lilydale managed to lock it up at half-back just prior to the siren.