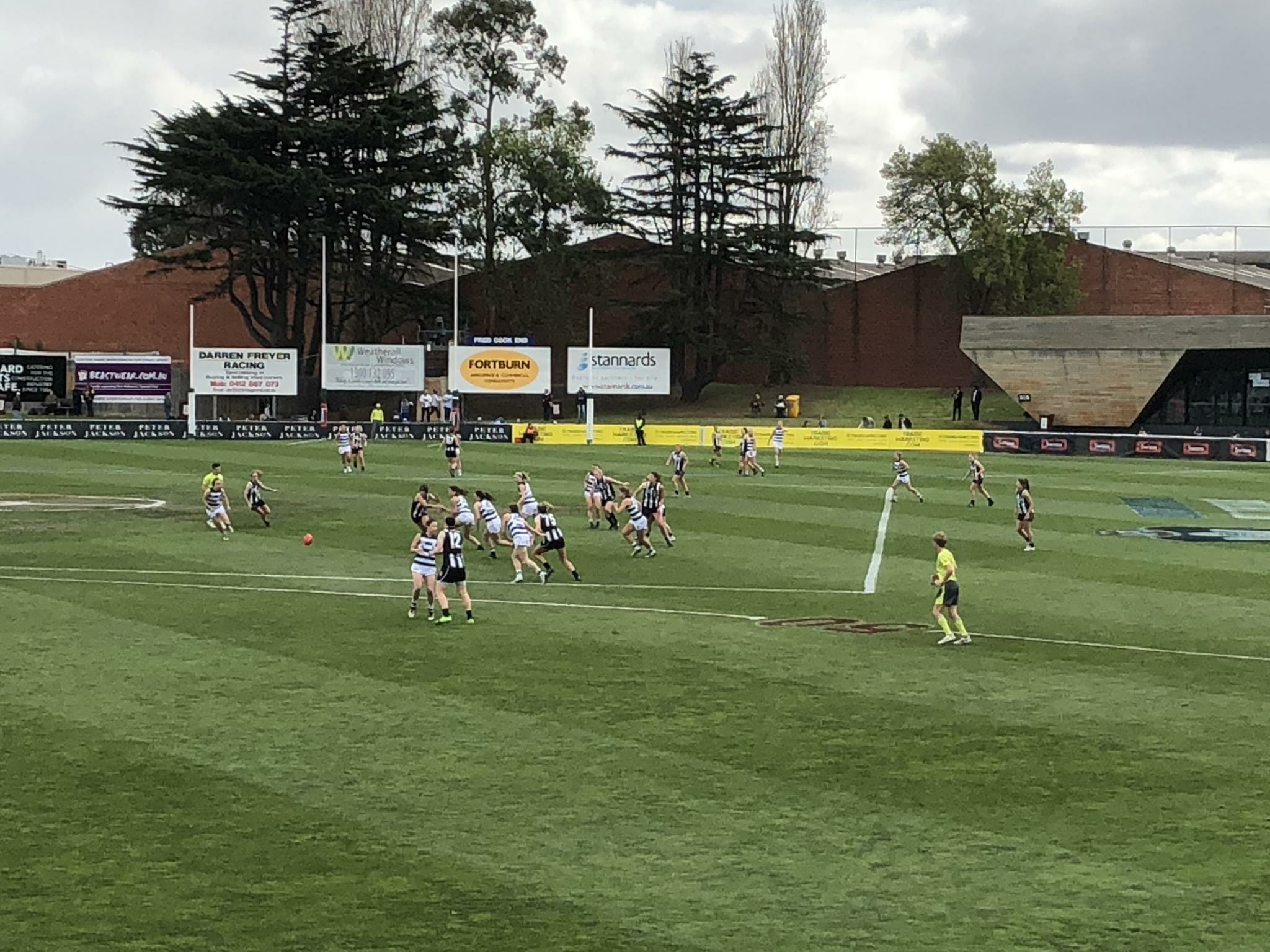 GEELONG has booked its place in the Victorian Football League (VFL) Women’s decider, after knocking Collingwood out in straight sets with an impressive 14-point win. We took a look at some of the top players from both sides on the day.

Did some nice things throughout the game, playing as the loose player in defence. Often she came across to help teammate, Jazz Ferguson who the Cats tried to isolate one-on-one inside 50. She also had a big moment punching a ball across the ground later in the game when Richelle Cranston had a shot on goal.

Was really good intercepting, but did miss a few kicks going forward. Had a forgettable moment in the third term dropping a mark in the back pocket, but worked hard to mop up. Got amongst it throughout the four quarters and never stopped trying.

Too tall for her opponents in the ruck and often punched it clear of the contest to keep the ball moving on the outside. Not overly mobile at ground level given her height, but laid tackles and put defensive pressure on opponents.

One of, if not Collingwood’s best on the day. She worked hard at both ends, dropping back into the defensive 50 to take some good marks, laid great tackles on the wing, and kicked a consolation goal running hard to the goal square and quickly getting boot-to-ball. Her tackling pressure and intensity on the ball carrier was definitely the highlight.

Stood tall against the flow and was one of the key reasons Collingwood was still in the contest early. She was composed in defence and able to use the ball well under pressure. Edwards had plenty of defensive efforts and then kicked a goal in the final term, four and a half minutes in to cut the deficit to 20 and give them a glimmer of hope.

Another player who kept trying throughout and had a few good moments, spreading to the wings and taking some good marks. She kicked Collingwood’s first major after making a half-lead inside 50, taking the grab and nailing the all-important set shot.

Superb in defence, along with Lambert was one of Collingwood’s best. She continually got to the right position one-on-one and ensured her opponents could not get a clean run at the ball. The opposition tried to isolate her one-on-one inside 50 against stronger bodies, but Ferguson held her own. She also ran off her opponent on a number of occasions trying to create drive off half-back. Took a strong mark on the wing late in the game, using her body well to outmark an opponent.

Provided an aerial target when she flew for her marks, and did cause some headaches for the opposition when up forward. Won a free kick for being held in the last quarter, but her shot from 35m out just drifted in the breeze and narrowly missed.

Did not win a heap of it, but had some classy moments. One example was a clean pick-up off the deck and quick handball to a teammate who kicked long inside 50 late in the game.

Played in defence and laid a number of strong tackles. She provided a good run-down tackle on Jaimee Lambert in the third term, forcing Lambert’s kick to sail out on the full instead of hitting a target inside 50.

Set the tone early with a big tackle at half-forward to lock the ball up. Had a shot on goal after receiving a 50m penalty but just missed to the left. Her best work was done in close.

One of the most impressive players, she was so strong in the air, taking a ton of marks inside 50 and giving her team scoring opportunities. She could not quite capitalise on the set shots, but one-on-one she was fantastic and she positions herself so well.

Another player who impressed me with some good hands in the air to take a few important grabs. She also did the defensive things right with her highlight coming in the third term. With the time ticking down she laid a huge tackle on Hannah McLaren to win a free kick just inside 50 and then launched from long range to hand the Cats a 21-point lead.

Had a couple of eye-catching moments when she tried to burst away and break the lines, did not always come off but was still noticeable. she had a shot on goal in the third term which just missed.

The youngster stood up in the finals intensity and put her body on the line when she needed to. Her stoppage work is superb and she is not afraid to fend-off an opponent and give herself an extra few seconds to clear the ball out of congestion.

Very impressive in both attack and defence and one of the main reasons why Geelong strangled Collingwood in the first three quarters. Ran hard to receive the handball in the opening term and then kicked the first goal of the game. Dropped back into defence in the second quarter to mark well, then had an attempt from long range in the third term that just missed. In the fourth term she went back into defence and took a courageous mark at half-back between two opponents.

Thought she had a quiet game to start, but then turned it on in the third term when she seemed to be everywhere. Geelong needed a statement to stop the Pies coming, and Cranston did just that. Her combination of power, acceleration and penetrating kick really turned the game in the third term, fending off a number of players and just bombing long to give her teammates the best chance of scoring.

Defenders do not often get much love, but Goring was absolutely spectacular. Along with Maddy McMahon and a number of others who refused to let their opponents beat them, Goring just worked incredibly hard over four quarters to stand in front of her opponents and rebound well, taking a number of intercept marks. Goring also pushed up to the wing when required to chop off any quick kicks going forward for the Magpies.