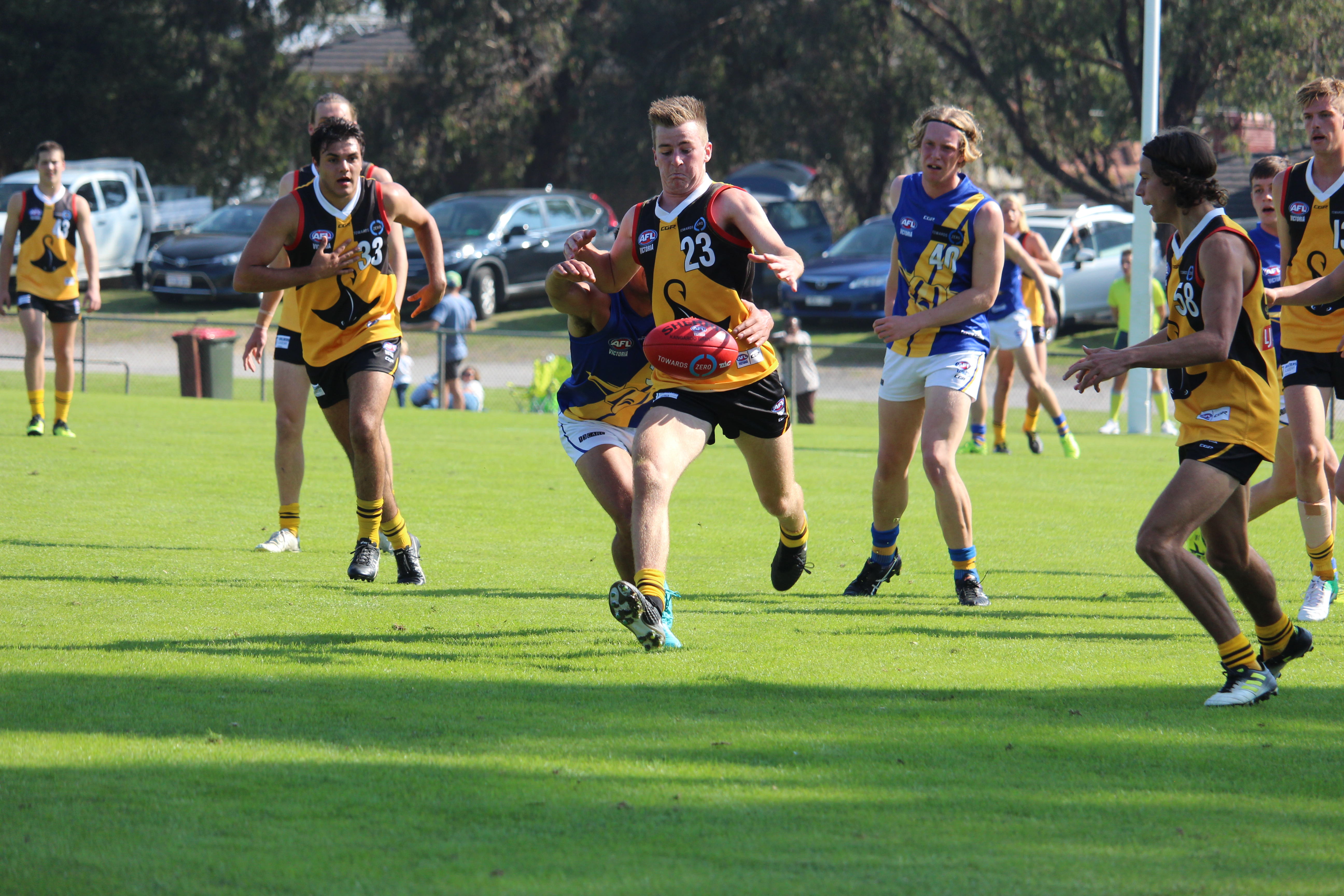 DISAPPOINTED that he missed out on a draft combine invitation, Dandenong Stingrays’ co-captain Campbell Hustwaite is letting his footy “do the talking”. The Stingrays leader spoke at the TAC Cup Grand Final press conference, of his pride in leading such a talented group of players throughout the season and how he hoped through his own recent form he could prove a point to AFL club recruiters ahead of this year’s National AFL Draft.

“I sort of used it as a bit of motivation,” Hustwaite said, of missing out on a combine invitation. “To find that out I was a bit disappointed on the day, and probably for a week or so after it. “But then I thought there’s no better way than to play some good footy and prove to everyone else that I feel like I should have had the opportunity too. “But I’m not fussed now and I’ll just let my footy do the talking for the last few weeks and hopefully do the same on the weekend.”

Dandenong Stingrays coach Craig Black said coaches always want as many players as possible to test themselves against the best at the draft combines, and admitted they would always want more regardless of the number selected.

“Obviously I think it’s one of those things, if you had five players, you’d want six,” he said. “If you had 15, you’d want 16.” I think the season that Campbell’s had has been quite remarkable, but just his attitude probably from getting a knock back, his form since then he’s probably averaging 27/28 touches a game. “Half a dozen tackles and clearances. “I know Campbell just lets his football do the talking, but the way he leads our football club is outstanding. “The respect he’s got amongst our group, we just hope like anyone on our list that if they keep playing well, they keep putting their names up there, and a club gives him an opportunity.”

Hustwaite said the captaincy was something he had enjoyed in season 2018, and while some players such as Bailey Williams had been in the spotlight more than others, it would take a team effort to defeat the Oakleigh Chargers in Saturday’s decider.

“It’s a bit of an honour for me, we’ve got a bit of talent in this side,” he said. “I know if I can just lead them on the right way, they’ll do most of the work themselves. “We’ve got star players like Bailey Williams who’s probably first round, he’ll do his own thing but it’s all about the team, it’s not about one player, it’s about 23 of us going out there and getting the job done.”

The Dandenong midfielder said there were a number of players who had built great form over the course of the season, and that had contributed to the Stingrays winning the minor premiership and reaching the 2018 TAC Cup Grand Final.

“I think Zac Foot was a big one,” Hustwaite said. “In pre-season he was sort of just the newbie and not many of the boys knew him, but he’s come across in leaps and bounds, but even Sam Fletcher coming back from injury. “It could have been easy for him to plod a bit because he’s got a good tag but he’s pushed himself harder than ever and he’s played a really few good months of footy.”

It might be Hustwaite’s first TAC Cup Grand Final, but the Rosebud product has more than enough experience when it comes to the last match of the season.

“I was lucky enough to play in a pretty talented team with a few of the Stingrays boys,” the Dandenong leader said. “(I) played in four (grand finals), back-to-back-to-back and was lucky enough to win them all. “Coming into this it’s a bit different, it’s nothing like junior football finals, but got the experience on the big stage, but I’m sure this will take it up another couple of notches.”

Having that experience of leading up to the big day, Hustwaite said he would try and keep his preparation as normal and structured as possible.

“Yeah so for me, it’s just throughout the whole year it’s just been getting the right balance from school and football,” he said. “This week will be no different, maybe even football takes an upper leg just for this week. “Last few days I’ve just been making sure I’m getting my body right for the upcoming week. I’ve taken the day off school today just to do the right thing by football, but not much changes really. “Keep the same preparation for the weekend, hopefully try not change too much. I’m a bit superstitious with some things so I’ll just stick to my routine and hopefully works again.”

As for a potential match-up, Hustwaite said the depth of both midfields meant each player would likely line-up alongside multiple opponents.

“I don’t see one match-up specific for me, but I know they’ve got five quality midfielders and talent all around the ground so we’ll be looking to challenge ourselves for the whole day,” he said. “We learnt in Round 5 you can’t lapse for a few minutes because they will make you pay, so on the weekend it’s just all about nullifying their talent I guess and backing ourselves in against their mids who comes up on the better side on the day.”

Dandenong Stingrays takes on Oakleigh Chargers from 12.05pm on Saturday, with the Stingrays chasing their first flag from their sixth attempt, while Oakleigh will look to add to their current tally of four premierships.