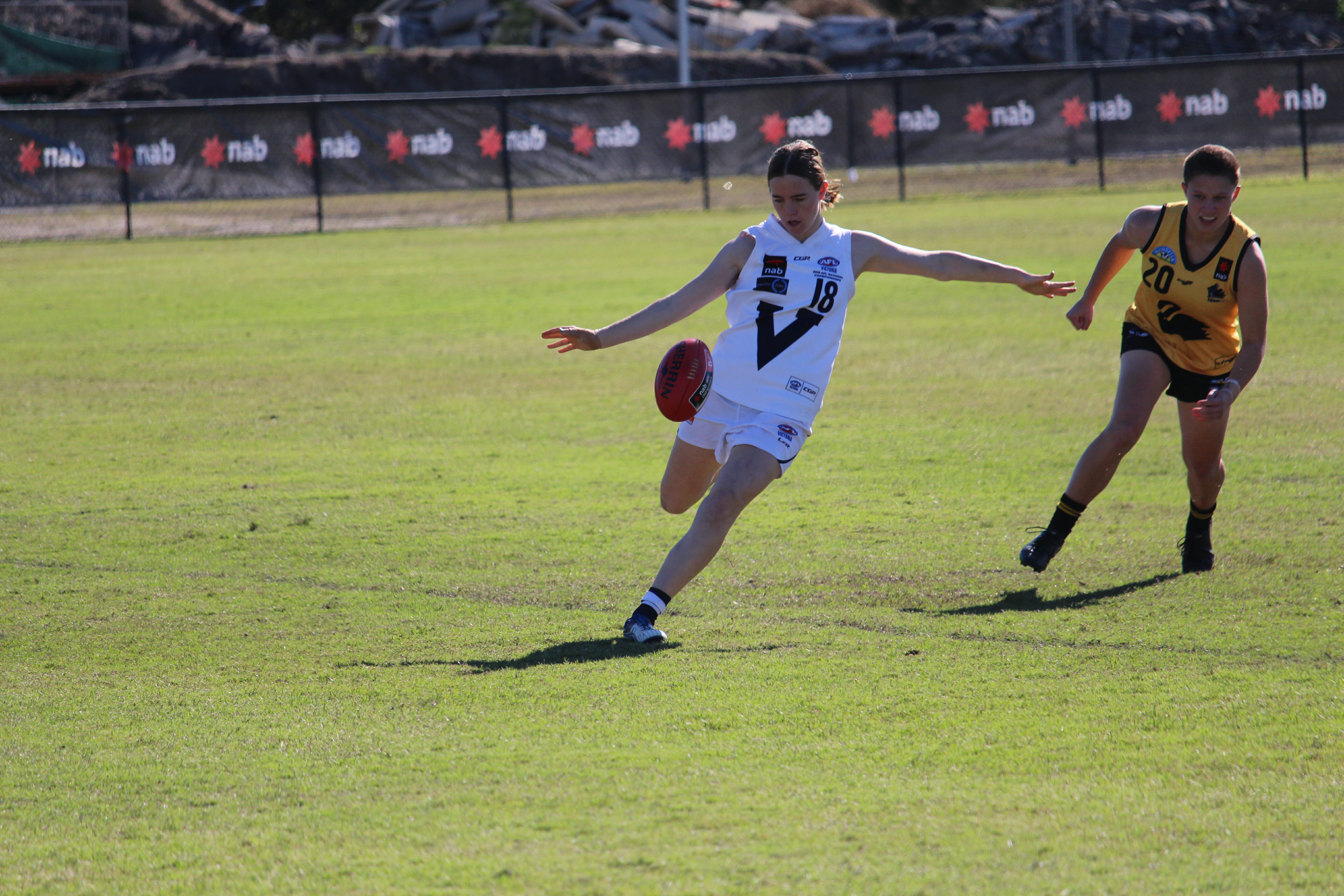 DESCRIBED as “Dad’s only son”, Denby Taylor has forged her own sporting pathway after growing up balancing both football and netball. Taylor said he father was a “footy nut” and could not be prouder that the Geelong Falcons star had followed football.

“I’d probably say my dad has been the biggest influence,” she said. “I suppose getting four daughters, given he’s a footy nut, wasn’t the best thing I suppose, for him, I think now he’s pretty happy and proud of where I’ve come. “I finished netball last year so I was playing that for about maybe nine years or so. “I followed my sister’s footsteps in the netball path, and sort of made my own pathway in the football. ‘Dad’s only son’ I get called.”

Taylor said she loved the fact that football just focused on the sport itself, and enjoyed the physical nature of the contest compared to other codes she had tried.

“The difference in the games obviously so much more physical and there’s the culture as well,” she said. “I think netball and a lot of other sports can get a little bit political, but footy just focuses on the footy and I really like that. “Footy for me is probably the culture that keeps me coming back, I really like how much of the culture and the tight knit community that the club provides. I suppose the physicality of the game as well, it’s quite different to most other games, it’s quite enjoyable.”

Taylor was kicking a football around from a young age, but then gave up the sport to pursue netball, before returning once Youth Girls had begun to rise in popularity.

“I started with Auskick, dad brought me down to the local club and started playing there and then after a couple of years I wasn’t very keen on playing with the boys so I gave up the footy and then started again when I was about 13 with the youth girls,” Taylor said. “Then I continued playing Youth Girls up until last year, and then representative footy as well along the way. “(I) did Geelong Falcons for the past couple of years and the national carnivals for a couple of years as well. “Between that I was playing netball as well for Newtown and Chilwell.”

While Taylor had been known best as a rebounding defender this season, her stints up forward were actually a throwback to where she had played the last few seasons.

“I’ve only recently started playing back and I’ve been loving it so, it’s a really great experience to switch up roles, but I suppose I’m comfortable down forward, it’s where I played a lot of my footy,” Taylor said. “It’s quite a big transition but I’m really happy being down back now.”

Upon reflection, Taylor said she and the rest of her Geelong Falcons teammates had enjoyed the 2018 premiership following a perfect, undefeated season, but now her focus was purely on the draft. In particular, the versatile utility said she was working hard to build her fitness ahead of the AFL Women’s Draft Combine next month. She knows the competition has intensified at both TAC Cup Girls and AFL Women’s Under 18 Championships.

“I think some of my family comes and watches the games,” Taylor said of the TAC Cup Girls. “They say every year it lifts so much, the quality and the community and how everyone’s getting around it is just getting a lot better. “It (the AFL Women’s Championships) was in Queensland again. “I had family up there who hadn’t seen football for a whole year between the last championships and they pretty much just said ‘wow, that’s unbelievable how much it’s changed and how much it’s changed since last year’ so I think that really put it into perspective, because i get to see it every day I suppose.”

Outside of her football, Taylor enjoys spending the majority of her time outdoors getting plenty of fresh air.

“I do woodwork as a subject at school, that’s something I really enjoy doing outside of school as well,” Taylor said. “That and I’m also into bike riding and skating so yeah, pretty much all the outdoorsy sort of things. “Next year I’m going to take a gap year and just work and sort out what I might want to do and I think sort of what’s on the plate at teh moment, is a teaching degree. maybe teaching sport or something along those lines, something I’m comfortable with.”

But the most immediate goal for Taylor is clear – get drafted onto an AFL Women’s list.

“I think for me footy was more of a social thing for a long thing and then once I started playing rep footy and started getting a bit better, I was like ‘oh this could be fun’,” Taylor said. “I might keep going, and once I got put in the National Academy I thought ‘alright I might as well give it a go’. “I’ve got the opportunity, I didn’t want to let it go.”