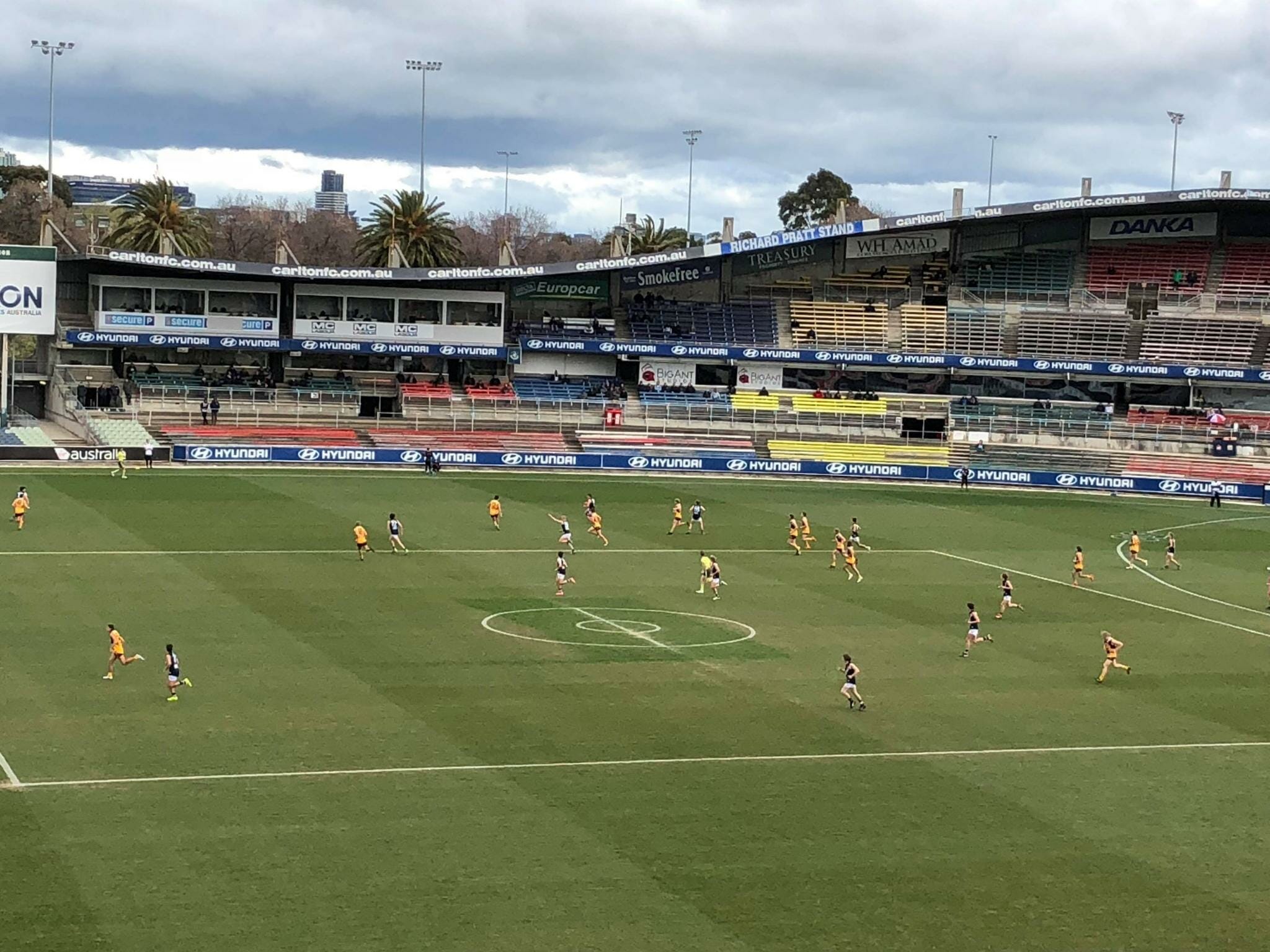 DANDENONG Stingrays have booked their place in the 2018 TAC Cup Grand Final after enjoying a solid 42-point win over Sandringham Dragons at Ikon Park today in swirling conditions. The Stingrays did not have it all their own way throughout the contest, but won every quarter with a five goals to one third term giving them a buffer at the final break and run away with the contest in the final term.

Both teams started by feeling each other out, with the ball predominantly in the Stingrays half, but it was Jack Mahony, getting on the end of an Alastair Richards kick inside 50. The ball bounced up perfectly for Mahony who kicked it from the goal square for the games’ first. A long range shot from Jamie Plumridge resulted in one behind for the Stingrays as the rain poured down. Then a quick snap from Ned Cahill in the goal square put Dandenong in front. Cahill then set up teammate, Bailey Williams with a chip over the top and the big forward made no mistake from the set shot.

Sam Fletcher had started strongly for the Stingrays, racking up 10 touches in the opening 15 minutes as he worked tirelessly on the inside. Meanwhile it was James Rendell who lined up for a set shot, with the wind pulling it to the side and it was punched across for a behind. The Dragons trailed by a goal with less than 10 minutes remaining in the quarter. Louis Butler almost had the goal of the day with a terrific snap, just hitting the goal post.

With the remainder of the term being an arm-wrestle, Fletcher finished the quarter with 10 disposals, three more than any other player, leading Plumridge (seven) and Jai Taylor (six). For the Dragons, Charlie Dean had seven disposals, while Rendell was their best with six touches and four marks, while Ben King lead out to take four marks.

It took 30 seconds for Sandringham to almost conquer something out of nothing with the Dragons two stars combining. A beautiful pick-up off the deck from King and quick hands to Morrish Medallist, Liam Stocker saw the latter have a flying shot on the goal but just missed. Riley Bowman had an equally great pick-up, but just missed the outside snap. Then the Stingrays got on the board with Zac Foot winning a couple of touches working hard with Toby Bedford to get on the end of it to kick a goal. Less than a minute later Sandringham responded through Mahony with his second of the game.

King played the role of rover in he goal square, pouncing on a loose ball after getting free at the back and dribbling a goal home to put the Dragons in front. Moments later Darcey Chirgwin extended the lead to seven points with a big mark and set shot goal. Cahill then laid a strong tackle and earned a free kick for his troubles, kicking the goal, his second of the match and being Dandenong’s most dominant forward.

A couple of pieces of Sam Sturt magic saw him set up Bedford with a pin-point perfect pass, then a quick handball over the top. While Bedford missed the set shot, the next running shot on goal the small forward made no mistake, putting the Stingrays back in front. Bedford’s impact on the game was profound as he snapped an unbelievable goal, making it two in a few minutes. Chirgwin answered Bedford’s double with his second on the term with a dribble goal in the square. At half-time, Fletcher and Callum Jones lead all-comers with 13 touches.

The first meaningful shot on goal was a quick snap off the deck from Williams who just missed. The wind was playing havoc on the game with a swirly breeze blowing to one side and forcing a number of balls out on the full or towards the boundary line. Williams had his second behind of the term with another quick snap that got caught in the breeze, but all the attack was in Dandenong’s front half. With everyone fumbling and missing stock-standard passes, it was Bedford who stood tall among all others and just summed up the situation with a handball receive from Williams, put it on the boot and bent it around the body for his third of the game.

Dandenong was doing all the attacking and Finlay Bayne was the beneficiary with a perfectly timed run and goal to put Dandenong out to their largest lead of the game, at 20 points. Just as it looked like the Stingrays were running away with the contest, 23rd player, George Grey bobbed up at the right time and snapped on the run to cut the deficit and give the Dragons some hope. That hope was soon erased when an attempted rebound was smothered by Matthew Cottrell and the ball bounced around and landed in the hands of Taylor who run into goal and punished Sandringham’s error.

A second error, this time a miscommunication by two Dragons defenders when they were three-on-one against Williams saw Will Kennedy and Corey Watts crash into each other, Williams scoop it up, handball to the running Taylor who got boot to ball with centimetres remaining and put through another. Williams took a good mark against a smaller opponent but could not quite convert, but seconds later he heard the voice of Sturt, left it for the exciting medium-tall who pounced and made no mistake to put the Dragons 34 points up at the final break.

The important first goal of the final term when to Finn Maginness who earned a 50m penalty and made no mistake from the goal square. But with all the hope that brought, it took just two minutes for the Stingrays to answer through Williams who took a great one-on-one mark and kicked the goal from 25m out. Sandringham had not given up, pushing hard with a few good inside 50s but Dandenong’s defence was holding up superbly kicking long down the wing and making sure there were repeat stoppages, or space for their smalls to run. If there was any doubt about the winner, then in the tenth minute, Williams swooped on a loose ball and went bang inside the square and the margin was 40 points and the Stingrays were heading to the TAC Cup Grand Final.

To put some great icing on a terrific cake, Sturt judged the ball in flight well and judged the ball drop to mark amongst a crowd of players and nailed the set shot to celebration. He almost had his third a few minutes later, but it swung right to left and missed. Up the other end, King answered with a good mark and set shot goal, his second of the match to hand the Dragons a consolation goal in what was ultimately a disappointing day.

Bedford was best on ground with 12 touches, six tackles and three goals in an impactful performance, while Sturt was equally busy up forward with two goals from 12 disposals, five marks and six tackles, and skipper Campbell Hustwaite stood strong throughout the four quarters with a game-high 27 disposals, nine clearances, five inside 50s and four tackles. For the Dragons, Rendell was the best with 17 disposals – all kicks – and 23 hitouts, and laid five tackles as well. Clearly hampered by his shoulder, Stocker was huge to play out the game and amass 17 disposals, four marks, 10 tackles, four inside 50s and two rebounds.