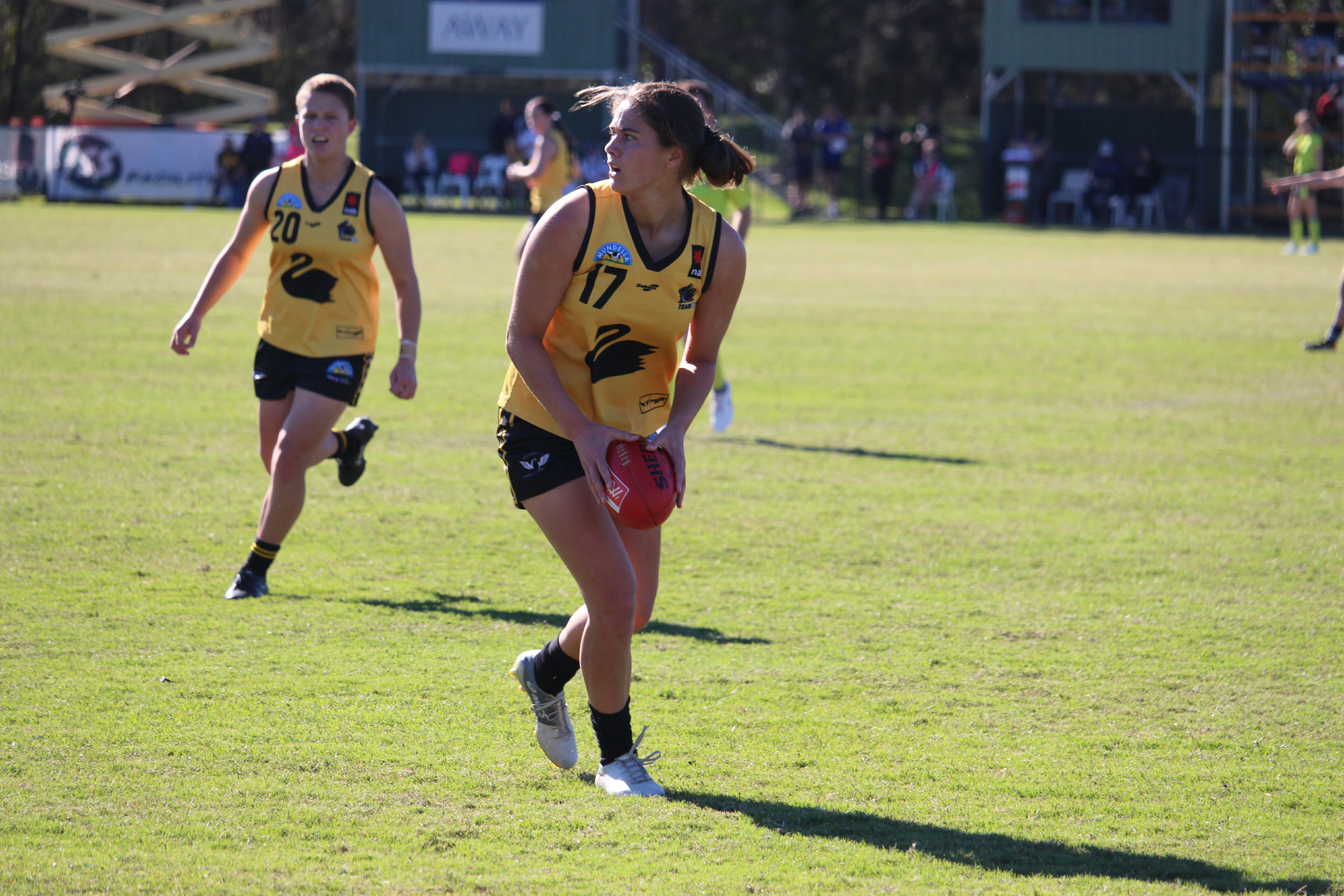 EAST Fremantle, Claremont and Peel Thunderbirds have each added a premiership cup to their trophy cabinets after a wonderful day of Western Australian Women’s Football League (WAWFL) Grand Finals. The Sharks claimed the senior premiership, the Tigers got the better of Peel in the reserves before the Thunderbirds secured a 20-point win in the Rogers Cup.

East Fremantle has claimed the WAWFL premiership with a 6.5 (41) to 5.6 (36) win over Subiaco. Despite the loss, Subiaco ruck, Danika Pisconeri was awarded the Player of the Match for her tireless work in the contests and her ability to rove her own ball.

East Fremantle co-captain, Ashlee Atkins kicked off the scoring for the Sharks when she roved the footy off a forward 50 stoppage and kicked her 16th major of the year. West Australian Under-18 representative, Roxanne Roux then got involved quickly with her first major, applying immense forward pressure and earning a free kick straight in front of goal.

The Lions’ first goal came off the boot of Under-18 state representative, McKenzie Dowrick who continued her stellar start to the game. She was able to take an intercept mark just outside the goal square and kick truly from a generous angle.

It did not take long for the Sharks’ first quarter goal kicker, Ashlee Atkins to get her second. She read the kick inside 50 beautifully and took a strong one-on-one mark straight in front of goal from close range.

It was then Subiaco’s turn to hit back, with Courtney Stubbs getting a blistering centre clearance and delivering a pass to Amy Lavell inside 50. Lavell read the ball perfectly at the back of the pack and slotted through her first of the day to put some pressure on the Sharks.

East Fremantle was then gifted with a golden opportunity when a free kick was rewarded from close range inside 50. All the players had stopped except for Belinda Smith, who cleverly picked the ball up off the deck and streamed into an open goal.

Not long after, Subiaco’s Dowrick executed a great smother just outside 50, then picked the ball up, spun around her player and booted it inside 50. Ashlea Renshaw had her work cut out for her in the goal square, but was gifted with a goal when Steph Wills ran past the ball, allowing Renshaw to pick up the ball and kick the major.

East Fremantle’s Katrina Tinson was then bizarrely grabbed by the hair as she was attempting to evade a tackle. The Shark still got away from her opponent and kicked a long ball inside 50, where Kahra Sprlyan took a great contested mark and slotted through the major late in the quarter.

At this point, Stubbs started to lift her game with some great kicking and run and carry for the Lions. AFLW star, Lara Filocamo also lifted her intensity with some strong tackling pressure, giving the Sharks no chance to go forward.

From a boundary throw-in, Dowrick kicked the ball around the corner on her non-preferred right foot which allowed Lavell to take a remarkable diving mark. On a tight angle on the boundary line, Lavell booted through her second goal to give Subiaco its first lead of the day.

The ball soon travelled to the other end of the ground where state Under-18 representative, Roux launched a ball from outside 50 that got the distance but hit the post. This made scores level at 5.4.34 a piece at three quarter time after a frenetic third term.

It took the Sharks 13 minutes to get the first goal of the quarter when Sprlyan took a strong contested mark just outside the goal square to get her second major of the day. Subiaco was pressing hard to wrestle the lead back ever since then, but a diving mark in defence from Julie-Anne Norrish saved the day for the Sharks, giving them a winning margin of just five points in a thrilling Grand Final.

Claremont has been crowned the champions of the WAWFL Reserves competition with a big win over Peel Thunderbirds. The Tigers got the upper hand early, outscoring the Thunderbirds three goals to two in the first term. Peel’s deficit was increased in the second, only managing one major while Claremont kicked three. A four goals to none third term effectively put the game away for the Tigers, holding a 51-point lead at the last break. Claremont’s scoring was minimised in the last term when it was restricted to two majors while the Thunderbirds completed their accurate day in front of goal with their fourth straight major.

There were goal kickers a plenty for the Tigers with Angel Hayward (three), Amber Ugle-Hayward (two) and Jasmina Andros (two) all kicking multiple goals. As reward for her hard work, Ugle-Hayward was awarded best on ground in the Grand Final. Hayward’s three goals took her tally to 19 goals from 14 games this year. Claremont leading goal kicker, Amy Smeding increased her goal kicking tally to 40 goals from 12 games, kicking one major. Holly Cattermole, Nikki Phillips, Lolita Viska and Misty Trimboli were the other single goal kickers for the Tigers. The competition’s leading goal kicker, Narelle McIntyre was restricted to one major for the game, completing her season with 43 goals from 16 games. She was complemented by Krystie Bland, Tess Blackburn and Maddie Bedford, who all chipped in with majors in the 63-point loss.

It was all square at the end of the first quarter, with both Peel and East Fremantle kicking a goal apiece. The tight contest continued into the second, as only three behinds separated the sides at the main break. Peel made amends of the ‘premiership quarter’ by kicking two goals to none, which ended up being the gamechanger in the Rogers Cup win. The scoring was even again in the fourth with both teams scoring one goal, but it was too late for the Sharks as the Thunderbirds claimed a 20-point Grand Final victory. Peel’s Jacklyn Atkinson was named Player of the Match.