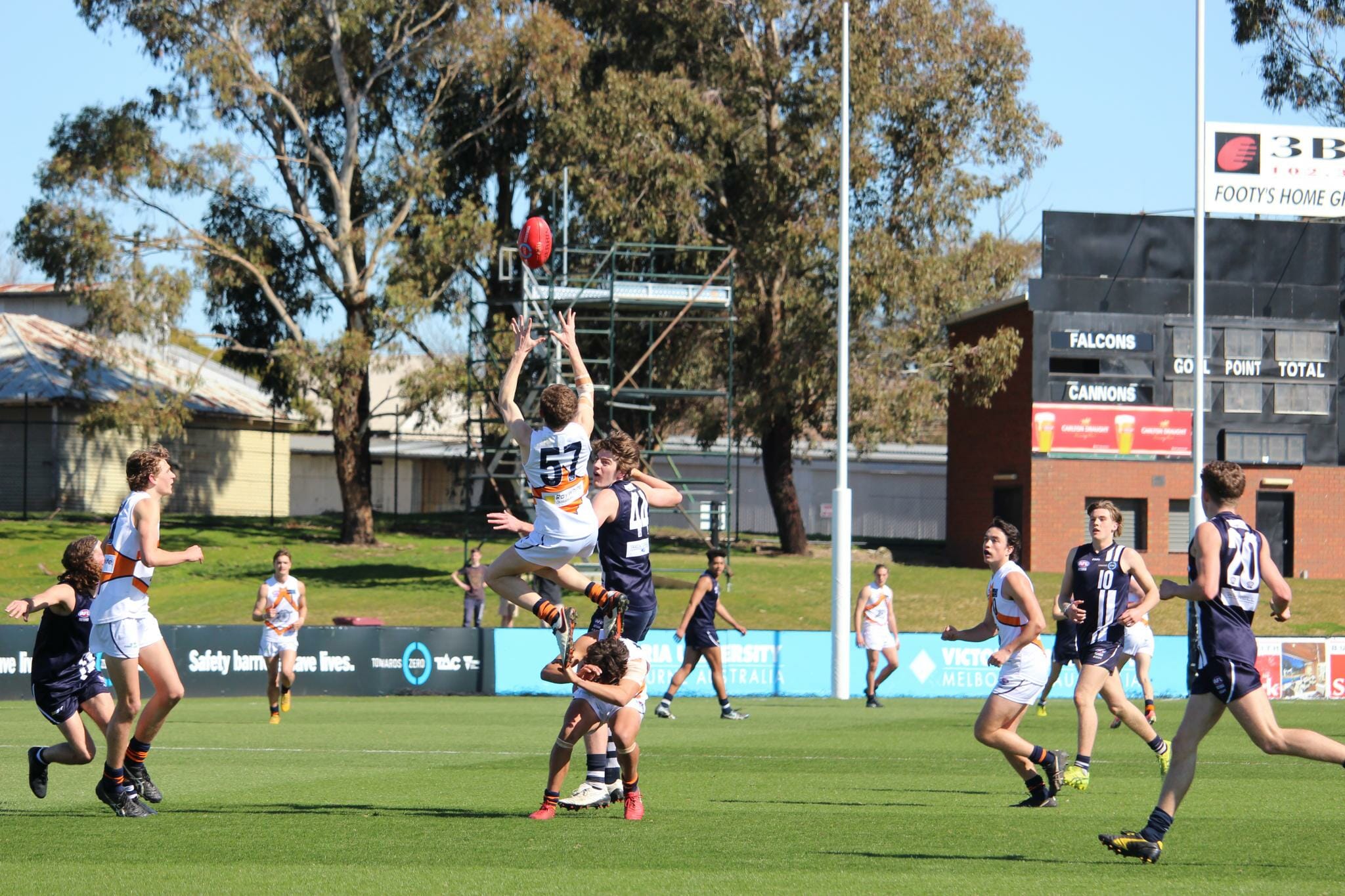 FOR players of four TAC Cup sides, they will run out for the final time this weekend with the new concept of a Wild Card Round giving every team the chance of winning a premiership, regardless of finishing position during the season. The four games will be played across two days, with a Double Header at MARS Stadium on Saturday, before a Double Header takes place at Ikon Park on Sunday.

It will be a case of déjà vu for fans who make the trip to MARS Stadium tomorrow. The Calder Cannons take on the Geelong Falcons at 11.30am, an identical match, time and place of their Round 16 clash a week ago. In that game, the Falcons proved too good, coming from behind at quarter time to run away with the game before the Cannons kicked back to go down by just 15 points. Arguably the Falcons should have won by more, as despite having 29 scoring shots to 19, they ended the match with an inaccurate 11.18 for the match. Co-captain Sam Walsh was a clear best on ground. Brayden Ham, while inaccurate in front of goal with 1.4, was exciting in the forward half, as was Connor Idun. Cooper Stephens and Ned McHenry were tough on the inside, while Cooper Cartledge and Charlie Sprague played their roles up their respective ends. For the Cannons, Rhylee West was sensational drifting forward to boot three goals, while Daniel Mott and Mitch Podhajski were strong through the midfield, with Podhajski getting forward to finish with two goals. Harrison Jones enjoyed a great game in the ruck, while Lachlan Sholl and Brodie Newman continue to impress behind the ball. Daniel Hanna has been named in the Cannons’ extended team, and will be a crucial inclusion to take a tall in the Falcons forward line, allowing the smaller rebounders to create more run out of defence. Geelong rightfully hold favouritism after last week, and pushing the minor premiers the week before, but both these teams are sleepers in the premiership race, and it is somewhat disappointing one has to go.

The second game marks the third time that the Northern Knights will travel to MARS Stadium for the season to tackle the Greater Western Victoria (GWV) Rebels. The venue holds no fears for the Knights, who have been victorious twice, once with a come-from-behind victory in Round 9 by four points, and then again in Round 12 when they won by 22 points. In the first encounter, it took until the 21st minute of the final term for the Northern Knights to hit the front for just the second time that day, with a Patrik Della Rocca goal. That was also the breakout game for bottom-ager Izaac Grant, who booted seven of the Rebels’ nine goals for the day. Elliott Lamb, Scott Carlin and Lochie Dawson were named the Rebels best on the day with Grant, while for the Knights, James Lucente‘s five majors saw him named the best, along with Della Rocca and Stefan Uzelac. In the second encounter, Sunny Brazier and Charlie Wilson booted three goals for their respective sides, while Cooper Craig-Peters and Patrick Glanford were the Rebels’ best. Adam Carafa had a day out with 37 disposals, while speedster Lachlan Potter was also impressive. On form, the Knights will head in as favourites, but some crucial inclusions for the Rebels in Carlin, Grant and Craig-Peters should be equally as important as Lucente and Ryan Sturgess for Northern.

On Sunday, the Western Jets will take on the Eastern Ranges in a game that is one of two that should be fairly straight forward. As we have seen with finals or pre-finals however, anything can happen and regular season form means nothing now that we are at the knockout stage of the season. Eastern had just the two wins, but pushed Western all the way back in the only encounter between the sides this season. In blustery Williamstown, the Ranges led throughout the match and only trailed by a goal at the final break – mostly due to the Jets inaccuracy, booting 2.12. The home side found its kicking boots in the final term however, booting five goals to one and ran away with the 31-point win. Steven Kyriazis booted two goals that day, while Zak Butters earned best on ground honours (he will not be out there this weekend) and Connor Thar and Stefan Radovanovic were also impressive. Billy McCormack was the multiple goalkicker for Eastern, while Jarrod Gilbee, James Ross and Mitch Mellis were the top Ranges. Mellis will be the only one of the trio playing on Sunday, with Eastern hoping to cause an upset. The winner will face Oakleigh Chargers in the elimination final, so will want to hit the game with some great form.

Murray Bushrangers were the side unlucky to drop out of the top four race, but by being the top-seeded team in the Wild Card Round, they take on the bottom-placed Bendigo Pioneers. The Pioneers have just had the two wins so far this season, while the Bushrangers won both their previous encounters against Bendigo. Murray won by 57 points in Round 2 up in Shepparton, before claiming a 40-point win at Queen Elizabeth Oval in Round 9. In the first game, Laitham Vandermeer was named best on ground, with the injured speedster not able to be out there on the weekend, but his partner in crime that day, Lachlan Ash will be, as will Nick Murray who was impressive in defence. Noah Wheeler was unsurprisingly named best for the Pioneers with another top performance, while Jye Caldwell amassed 24 disposals and laid seven tackles in his only TAC Cup game until last weekend. He will be crucial for the Pioneers this weekend if they are to get the upset, however the Bushrangers look to be too strong on season form. In the second encounter, Ely Smith was best on ground with 28 disposals and nine tackles, while Jordon Butts slotted six goals in a terrific effort up forward. Oscar Perez and Zane Keighran booted two goals each, while ruck Daniel Keating was named the Pioneers’ top player. With no Wheeler, Keighran or Keating this weekend, it will be a big ask for the Pioneers to get up, but there is no coming back.