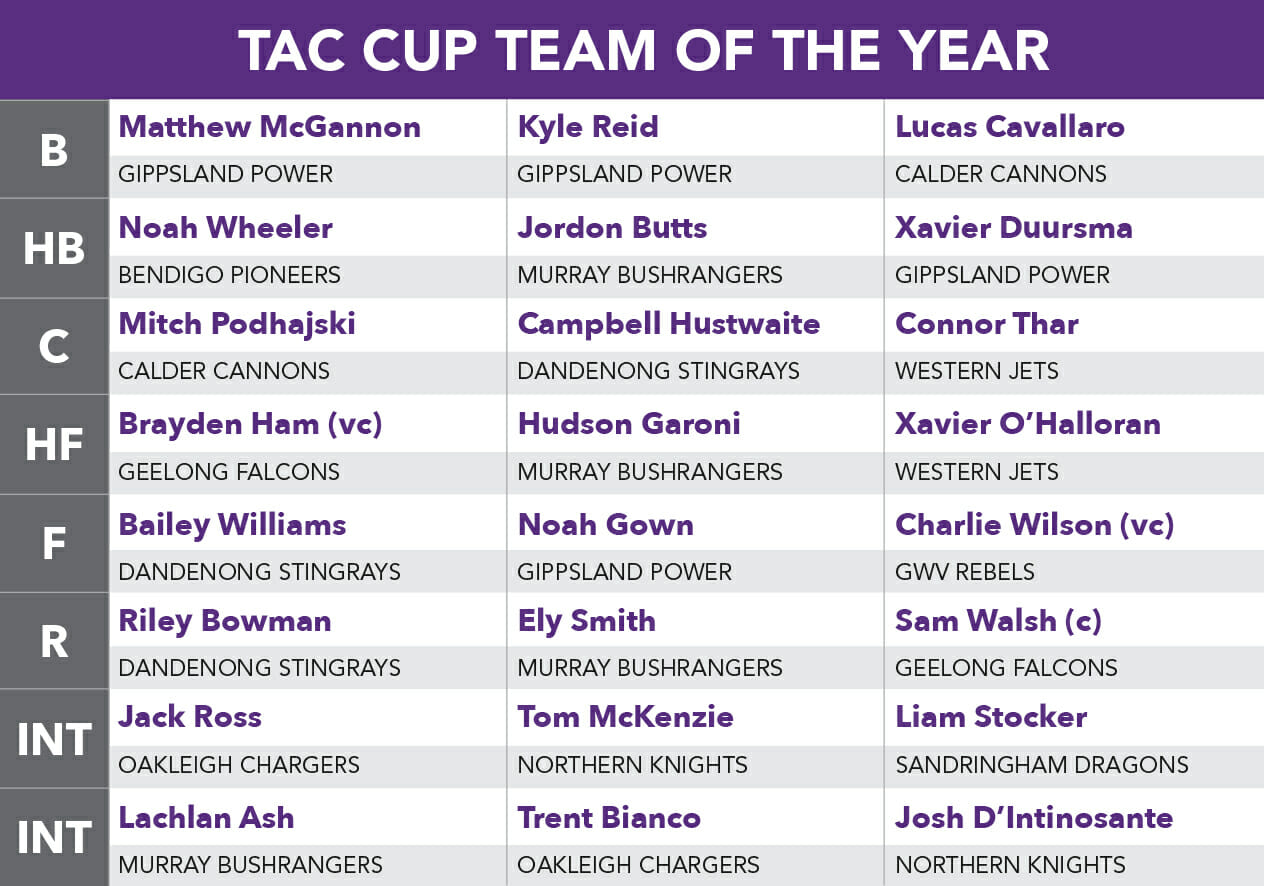 GIPPSLAND Power and Murray Bushrangers make up one third of the AFL Draft Central TAC Cup Team of the Year, with four nominees each in the side. Every side except Eastern Ranges is represented in the team, with minor premiers Dandenong Stingrays (three), Calder Cannons (two), Geelong Falcons (two), Northern Knights (two), Oakleigh Chargers (two) and Western Jets (two) all having multiple nominees. Bendigo Pioneers and Greater Western Victoria (GWV) Rebels have one nominee in the starting team each.

Gippsland Power has plenty of talented bottom-agers, but its four National Combine invitees made our Team of the Year in 2018, lead by captain Xavier Duursma, over-ager Matthew McGannon, and bookends Kyle Reid and Noah Gown. Murray also had four nominees with key forward Hudson Garoni, reliable midfielder Ely Smith, the versatile Jordon Butts, and bottom-ager Lachlan Ash, all making the side. Dandenong Stingrays trio, Bailey Williams and Riley Bowman provide the ruck and forward depth, while captain Campbell Hustwaite has had a superb season.

Amongst the sides with dual nominations are Calder Cannons, with co-captain Mitch Podhajski and serial rebounder Lucas Cavallaro making the side after consistent seasons. Geelong Falcons co-captain Sam Walsh is no surprise in the team, captaining the team with teammate, Brayden Ham his vice-captain. GWV Rebels’ forward Charlie Wilson is the sole Rebel in the side, but his eight nominations – equal with Walsh and Ham – have earned him vice-captain with Ham.

Northern Knights duo, Tom McKenzie and Josh D’Intinosante have made the side, with McKenzie being a rare inclusion given he has missed a lot of football due to school commitments. But the football he has played, he has starred and has earned a place in the side. Oakleigh Chargers also have two nominees in the team despite most of their side missing at times, with Jack Ross and Trent Bianco impressing when at TAC Cup level, making the Team of the Year.

The remaining members of the best 24 are Western Jets duo, Xavier O’Halloran and Connor Thar, as well as the sole Bendigo Pioneers nominee, Noah Wheeler, who slots onto a half-back flank. Much like the All-Australian side, the three bottom-agers in Ash, Bianco and D’Intinosante have been named on the bench.

In the Second Team of the Year, Calder Cannons, Eastern Ranges, Northern Knights, Oakleigh Chargers and Western Jets all have three nominees each to fill out more than 60 per cent of the team. Dandenong Stingrays, Murray Bushrangers and Sandringham Dragons each have two nominees, while Geelong Falcons, Gippsland Power and GWV Rebels have a sole nominee in each in the team. Bendigo Pioneers is the only side without a nominee in the Second Team of the Year.

Is Brayden Ham likely to be drafted?

He would certainly come into consideration later in the draft and rookie draft given his athletic capabilities and high impact per possession.