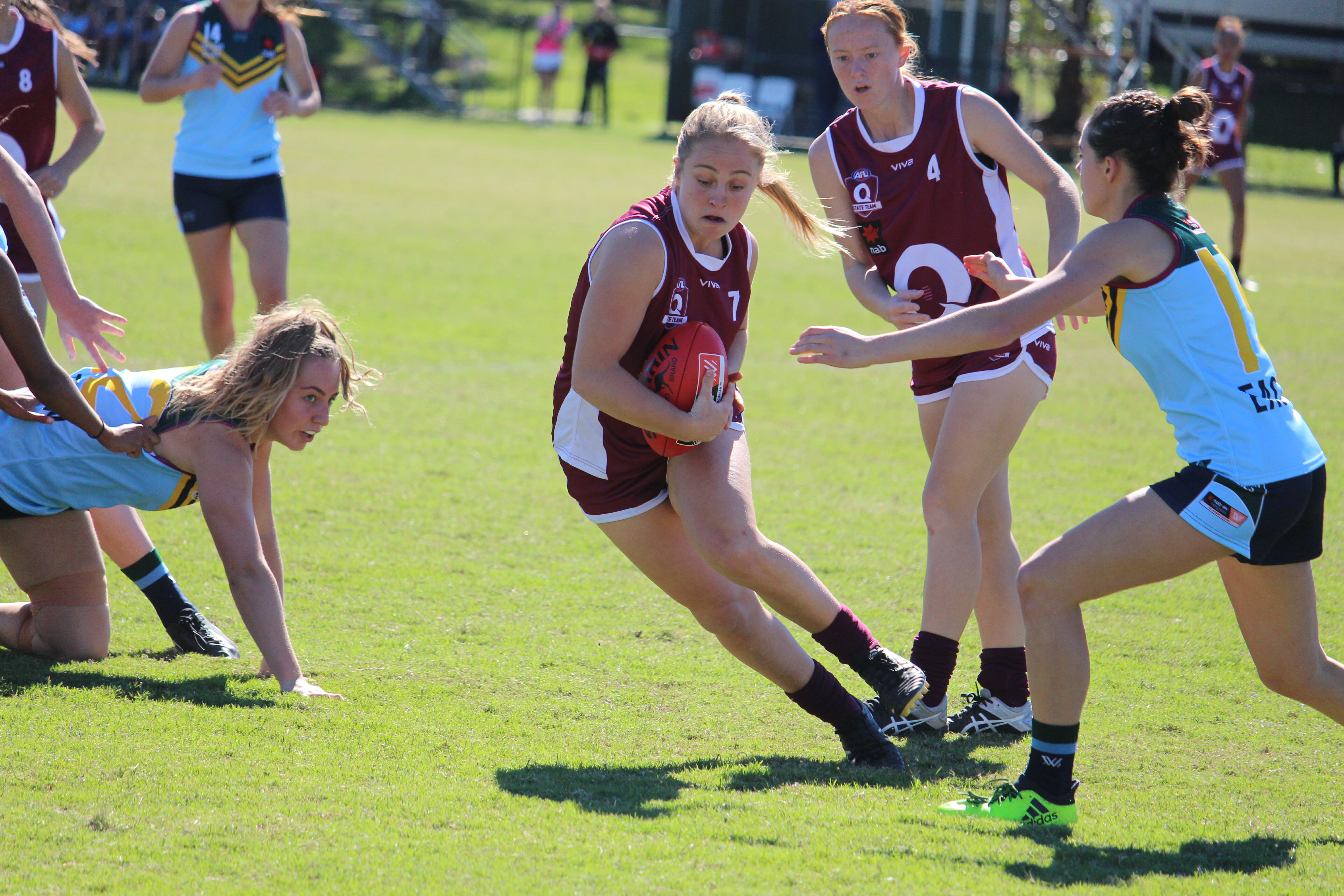 WILSTON Grange has claimed the 2018 Queensland Women’s Australian Football League (QWAFL) premiership with a come-from-behind victory over a determined Coorparoo outfit on the weekend. The Grand Final was tight and contested as expected, and the Kings looked to be switched on from the first bounce. The tide turned on the back of an inspirational tackle from a 17 year-old Under 18s state representative, changing the course of the grand final.

The first key play of the day saw a mis-kick from Kings forward, Jenae Govan luckily landed in front of Brisbane AFL Women’s star, Jess Wuetschner who slid in, took the mark and then converted from 15 metres out to hand the Kings their first goal. Moments later, a 50 metre encroachment penalty helped Samantha Hurst move to almost point blank range, and within five minutes, the underdogs had two goals on the board. It took until the nineteenth minute for the minor premiers to get on the board, when an “overzealous” Wuetschner was penalised for a tackle on Gorilla opponent Jordan Membrey. From 15 metres out on a slight angle, Membrey shook the collective monkey off Wilston Grange’s back with a dead-eye goal. The Kings still held an eight-point lead at quarter time and were deserving leaders at the first break.

The highlight of the second term came when Tori Groves-Little pumped the ball long inside 50, but a smart Michaela Campbell, who had been prolific in rebounding out of the Gorillas’ defence, gave it off and received it back via Courtney Daniec. Her kick went long to a contest, but while it wrapped up the perfect work from the stoppage saw AFL Women’s Lions star, Kate Lutkins win the footy and pump it long. Creating a contest, Maddison Peeters forced the ball out for Tahlia Randall to give it off to Jamie Stanton who made no mistake off a couple of steps, putting the Gorillas back within a point and breaking the goal drought. A couple more chances went begging late in the term, but it gave Wilston Grange a two-point lead at the main break.

Emerging from the half-time break, Wuetschner opted for the long sleeves in the second half, and it seemed to work. After Ally Anderson won a free kick for another encroachment, Wuetschner knew her teammate could not make the distance and made a couple of leads, changing direction before Anderson drilled a pass onto her chest. She made no mistake, converting from straight in front and putting her side back in the lead just two and a half minutes into the third quarter. The pair had been amongst Coorparoo’s best to date, along with youngster Jade Ellenger, while for Wilston Grange, Campbell and Lutkins were superb in defence, and Isabel Dawes was creative in midfield.

Coorparoo teenager, Jesse Tawhiao-Wardlaw was battling hard in the ruck at times against the experienced All-Australian Lutkins. But if you are looking at big moments, none bigger came when bottom-ager Isabel Dawes stopped a certain free kick with a run-down tackle in the goal square. Tawhiao-Wardlaw blocked an opponent, handballed to Wuetschner who kicked into the vacant square where it was marked by Govan, who thought she would stroll in for the easiest of goals. But instead, Dawes blindsided her and brought her down before she could get boot to ball. Had she kicked it, Coorparoo would have gone 10 points up midway through the third term. Just two minutes later, Wilston Grange locked the ball inside 50 and Jemma Abbott chipped in to Membrey who took a step and nailed a goal from 35 metres out to hand the Gorillas the lead.

From there, the Gorillas never looked back. Another attack was thwarted by Ellenger who sidestepped an opponent on the last line and kicked out of defence, with the Queensland Under 18 representative among the top players on the day. The Kings were desperate in defence, but the Gorillas press was causing headaches. Unfortunately for Ellenger, she tried to get out of one too many tackles when she was caught holding the ball and Lutkins delivered from the set shot. A couple of minutes later, Brittany Gibson kicked a brilliant goal off a couple of steps and handed the Gorillas a vital 15-point lead. Wuetschner had a chance to cut the deficit, but played on and miskicked towards Govan in the square and the ball was rushed across the line for a three quarter time deficit of 14 points.

The final term saw just four behinds scored, as the damage was done. From that Dawes tackle to stop the Kings lead going into double figures, the Gorillas had booted the last three goals of the game. They were fierce in their attack going forward, with so many options looking to kick long inside 50 and seemingly putting pressure on the Kings defence. In response, the Kings held up strongly, but with Lutkins and Campbell in the back half, they could not penetrate the stringent defence, falling short and going down 5.7 (37) to 3.5 (23).

Anderson was arguably Coorparoo’s best in the defeat, quelled a little more by Dawes in the second half, but created great run and carry kicking long inside 50. Wuetschner had her chances up forward, converting two majors, while Ellenger was willing to take the game on in defence. For the winners, there was not shortage of top performers, but Lutkins, Campbell and Stanton were enormous, while Dawes was terrific in midfield.