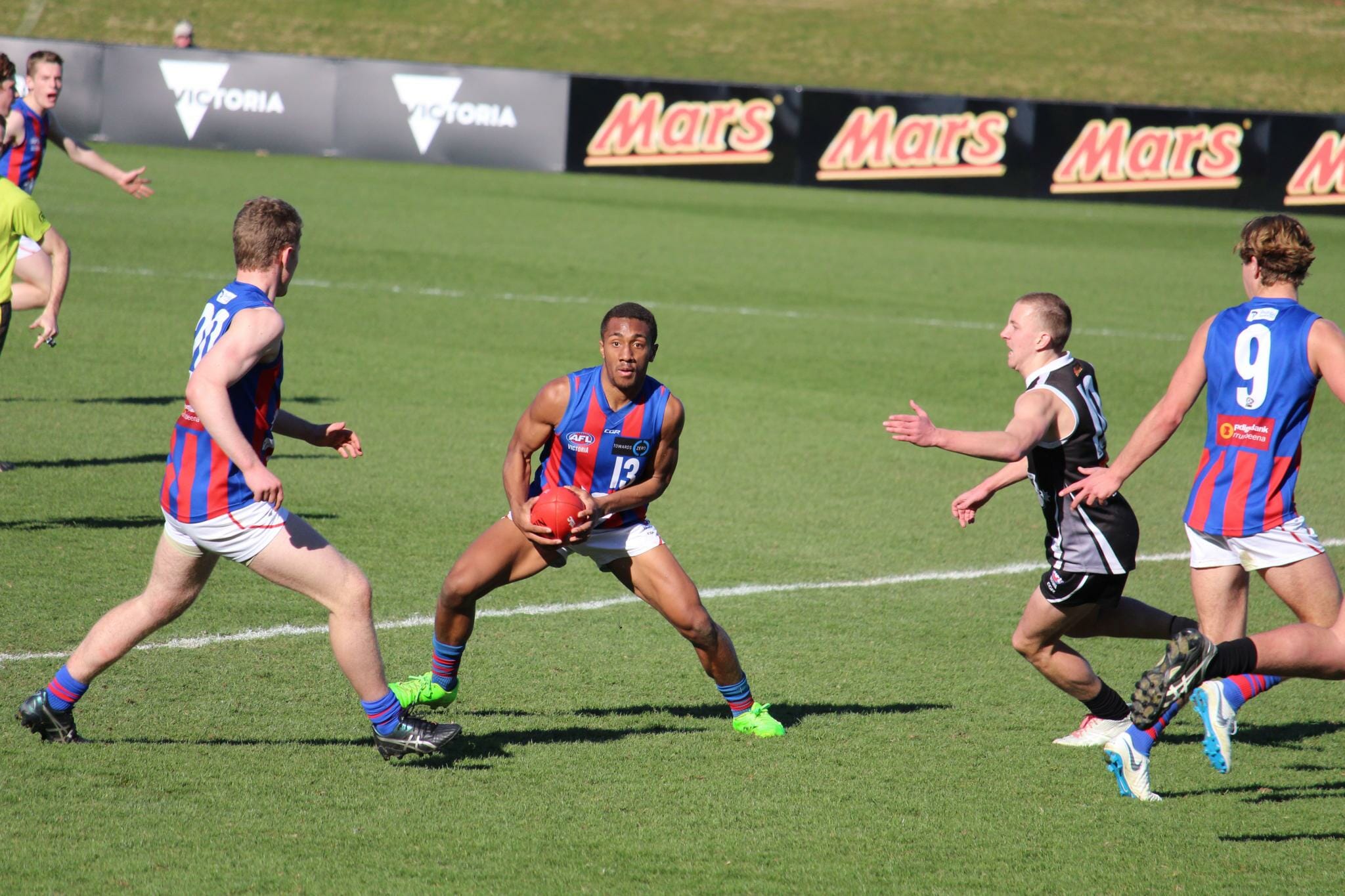 THE final round of the TAC Cup threw up some surprising results, and some standout individual performances. Here is how Round 16 went down.

Dandenong Stingrays capped off a near-perfect home and away season, defeating top four side, Sandringham Dragons by 49 points at Trevor Barker Beach Oval on the weekend. The Stingrays finished the season with a 15-1 record and that loss was a six-point defeat at the hands of Oakleigh Chargers. The Stingrays burst out of the blocks booting six goals to one in the opening half, and by the final break had 10 goals on the board to the Dragons’ two. The final term was a goal fest with eight of the 20 goals kicked, as both teams shared in the feast booting four goals apiece.

For the Dragons, Liam Stocker had another day out, amassing 32 disposals, one mark, nine clearances, eight inside 50s and three rebounds, winning two thirds of his possessions at the coal face. Alastair Richards was equally effective on the outside, collecting 25 disposals, three marks, two clearances and four rebounds to give the Dragons some important run. James Rendell (14 disposals, two contested marks, 29 hitouts and a goal) and Corey Watts (20 disposals and eight marks) were others who stood tall for the losing side.

Geelong Falcons gained a vital mental advantage over the Calder Cannons, claiming bragging rights  ahead of the pair’s duel in the Wild Card Round next weekend. The Falcons had to fight from eight points down at quarter time to put pressure on their opponents and had 11 scoring shots to two in the second quarter, heading in with a 16-point advantage. They built on that lead in the third term, before the Cannons finished stronger, but it was just too little, too late in the game, as the Falcons celebrated by 15 points.

Calder had a number of strong contributors with Daniel Mott having a team-high 29 disposals, three marks, nine clearances, six inside 50s and three rebounds. Rhylee West was strong up forward, booting three goals while resting up there to go with his 20 touches, four marks (two contested), six clearances and four inside 50s. Lachlan Sholl (20 disposals, 11 marks and five rebounds) and Mitch Podhajski (21 disposals, eight marks, two clearances, four inside 50s and two goals) were others who stood out for the Cannons.

In a match that started positively for the Rebels, it ended in disaster as Oakleigh Chargers stormed home with a 90-point win at MARS Stadium. The Rebels, although down at the first break, had been matching the Chargers around the ground, and faced a 13-point deficit at the first break. A five goals to two second term put the Rebels to the sword, but it was the nine goals to one second half that saw Oakleigh waltz away with the huge win, peppering the goals in the second half, having a whopping 20 scoring shots to two, in a game which the deficit could have been even greater.

Jack Ross had the most disposals, with 26 touches, five marks, seven clearances, four inside 50s and a goal, ably assisted on the inside by James Rowbottom (24 disposals and eight clearances) and Riley Collier-Dawkins (16 disposals and seven clearances). Trent Bianco had another impressive game highlighted by a strong second half, picking up 15 disposals and having 24 overall, to go with his five marks and six rebounds, while Zac Hart buzzed around to collect 23 disposals, six marks, six inside 50s and three rebounds. Atu Bosenavulagi and Jake Gasper caused headaches up forward, while Noah Anderson and Jay Robertson also booted three goals.

For the Rebels, Matty Lloyd was the sole player with more than 20 disposals, having 24 touches, five marks and eight rebounds, while forward, Jed Hill was the clear standout player, having 12 disposals, three marks (one contested), two clearances and three goals – all in the first half. Jayden Wright played well in defence with five rebounds from 19 disposals and three marks, while Charlie Wilson had four clearances and four inside 50s from 14 disposals.

Gippsland Power finished their season off with a hard-fought nine-point win over Eastern Ranges. The Power had to work for it against the bottom two side, booting the first four goals of the game, but being reeled in over the next two quarters to trail at the final break by three points. Luckily for Gippsland, they booted four goals to two in the final term and ensured their regular season ended on a high.

Northern Knights spoiled the party for Murray Bushrangers, who were looking to cement a top four spot with a win. The Knights could not move out of eighth spot, and the home side got on top early, booting six goals to three in the first half. Northern clawed back into the contest in the third quarter, to cut the deficit to nine points at the final change, but came over the top of the Bushrangers, booting four goals to one in the nine-point victory.

Jimmy Boyer was the top ball winner for the Bushrangers, racking up 25 touches, seven marks, seven clearances and three inside 50s, while Edward Adams had 22 disposals, seven marks (one contested) and four rebounds. Jordon Butts was productive through the midfield, sending the ball inside 50 on six occasions from 21 disposals and seven marks, while Nick Murray had five rebounds from 21 disposals and seven marks. Bottom-ager Lachlan Ash (17 disposals, five marks and five rebounds) and Ely Smith (18 disposals, two marks, four clearances, five inside 50s and a goal) were others who impressed for the losing side.

A six goals to two first term effectively ended the contest before it began, as the finals-bound Western Jets got the job done against the Bendigo Pioneers. After quarter time it was much closer as the Pioneers booted six goals to the Jets’ nine, but could not quite capitalise and the Jets enjoyed the 41-point lead heading into the Wild Card Round next weekend.

Connor Thar had a super game with 32 disposals, five marks, three contested, five inside 50s, two rebounds and two goals to be named the AFL Draft Central Player of the Week for Round 16, while Daly Andrews (26 disposals, nine marks, six inside 50s, four rebounds and one goal) was busy around the ground. Captain Xavier O’Halloran was deadly going inside 50, having 10 entries along with 25 touches, six marks, four clearances and a goal. Jack Watkins was also instrumental with 25 disposals, four marks, five clearances, eight inside 50s and a goal. Aaron Clarke was the key forward with four majors while Steven Kyriazis booted three.

For the Pioneers, Noah Wheeler was again the top performer for the home side, picking up 19 disposals, four marks, five inside 50s, six rebounds and a goal, while Bailey Henderson had six rebounds from 22 disposals and seven marks. Talented bottom-ager Brodie Kemp had 21 disposals, five marks, seven clearances, three inside 50s and two rebounds, while Jye Caldwell had 19 disposals, four marks and four clearances in his first TAC Cup game since early in the year.