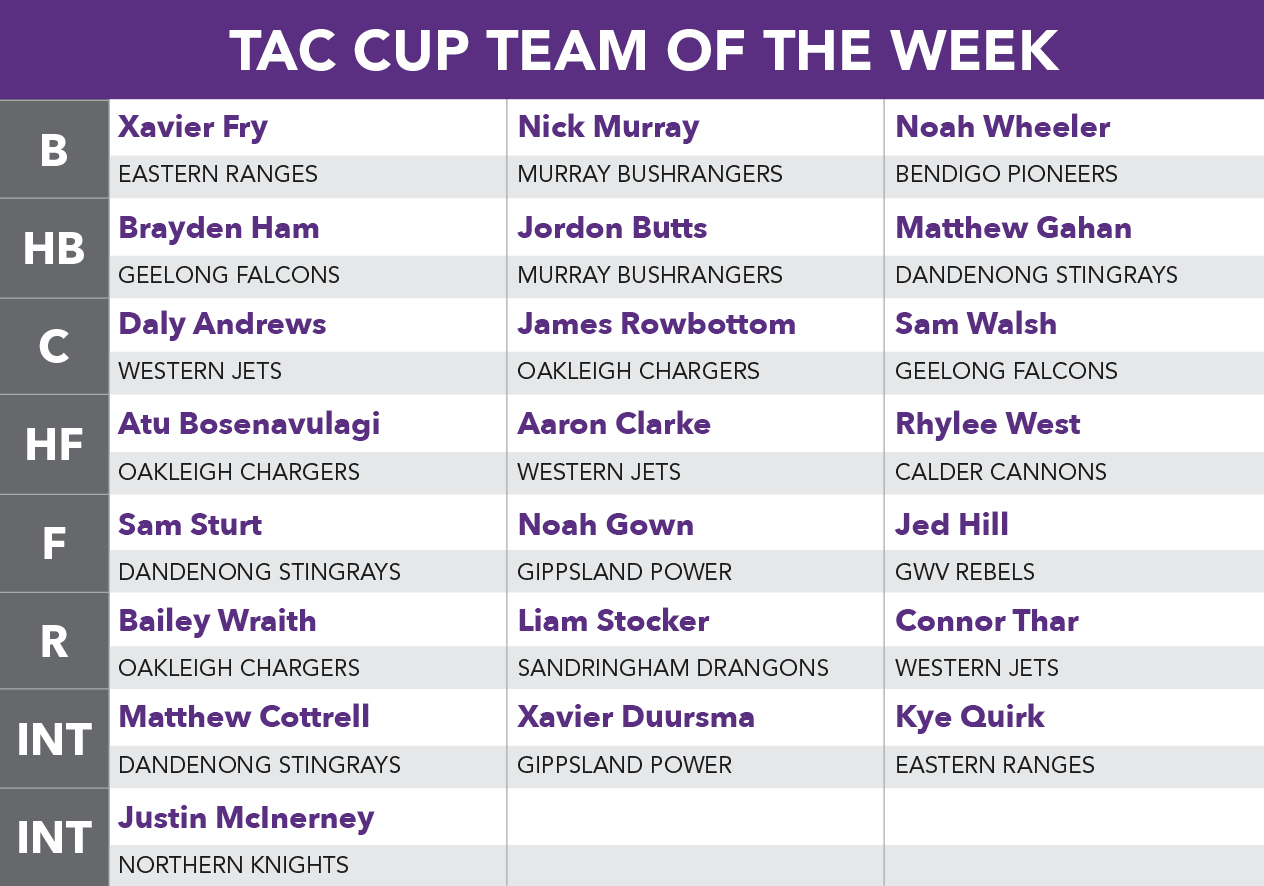 IN the final round of the TAC Cup season it was incredibly hard to narrow down the best 22 to create the AFL Draft Central TAC Cup Team of the Week for Round 16. In the end, with impressive wins to Dandenong Stingrays, Oakleigh Chargers and Western Jets each team had three players named in the side, while losers Eastern Ranges and Murray Bushrangers had two representatives with the other winners. Equally, Northern Knights had just the one representative indicating the team effort to get the job done against Murray, along with the remaining losers of Round 16.

Dandenong’s big win over Sandringham Dragons resulted in defender Matthew Gahan, forward Sam Sturt, and inside midfielder, Matthew Cottrell earn their places in the Team of the Week. Fellow top four side, Oakleigh had a huge win over Greater Western Victoria (GWV) Rebels, and also had three players make the best 22 for the week with Bailey Wraith‘s ruck performance, James Rowbottom‘s midfield work and Atu Bosenavulagi‘s forward craft among the deserving nominees. Oakleigh had plenty of others who could have made the side as well, including Charlie Whitehead and Noah Anderson.

Western Jets also had three players in the Team of the Week, with consistent midfielder, Connor Thar, and speedster Daly Andrews making the team, as did key forward Aaron Clarke. Captain Xavier O’Halloran came close to making the side yet again but just missed out. Geelong Falcons duo Sam Walsh and Brayden Ham have been regulars in the Team of the Week this year and Round 16 was no different, as Ham was named on the half-back flank having played at both ends. Their opponents, Calder Cannons had just the one nominee in Rhylee West who stood tall up forward, but Daniel Mott was considered unlucky and was the 23rd player in the team.

Gippsland Power and Eastern Ranges both had two players make the Team of the Week from their clash, as key forward, Noah Gown and captain, Xavier Duursma made the team once again backing up their impressive recent form. For Eastern, Xavier Fry and Kye Quirk slotted into the best 22. Murray Bushrangers also had two talls make the side despite the loss, with Nick Murray and Jordon Butts slotting into the key defensive posts. While Butts did not play the role on the weekend, he has the versatility to play anywhere and deserved to make it into the 22 after a strong performance.

Of the remaining players in the 22, those who made the Team of the Week as individual nominees were the hardworking Noah Wheeler (Bendigo Pioneers), GWV Rebels forward Jed Hill, Northern Knights midfielder Justin McInerney and Sandringham Dragons star Liam Stocker. Stocker’s teammate, James Rendell was unlucky not to make the team, as was McInerney’s bottom-age teammate, Adam Carafa who could both be hypothetical emergencies in the Team of the Week.