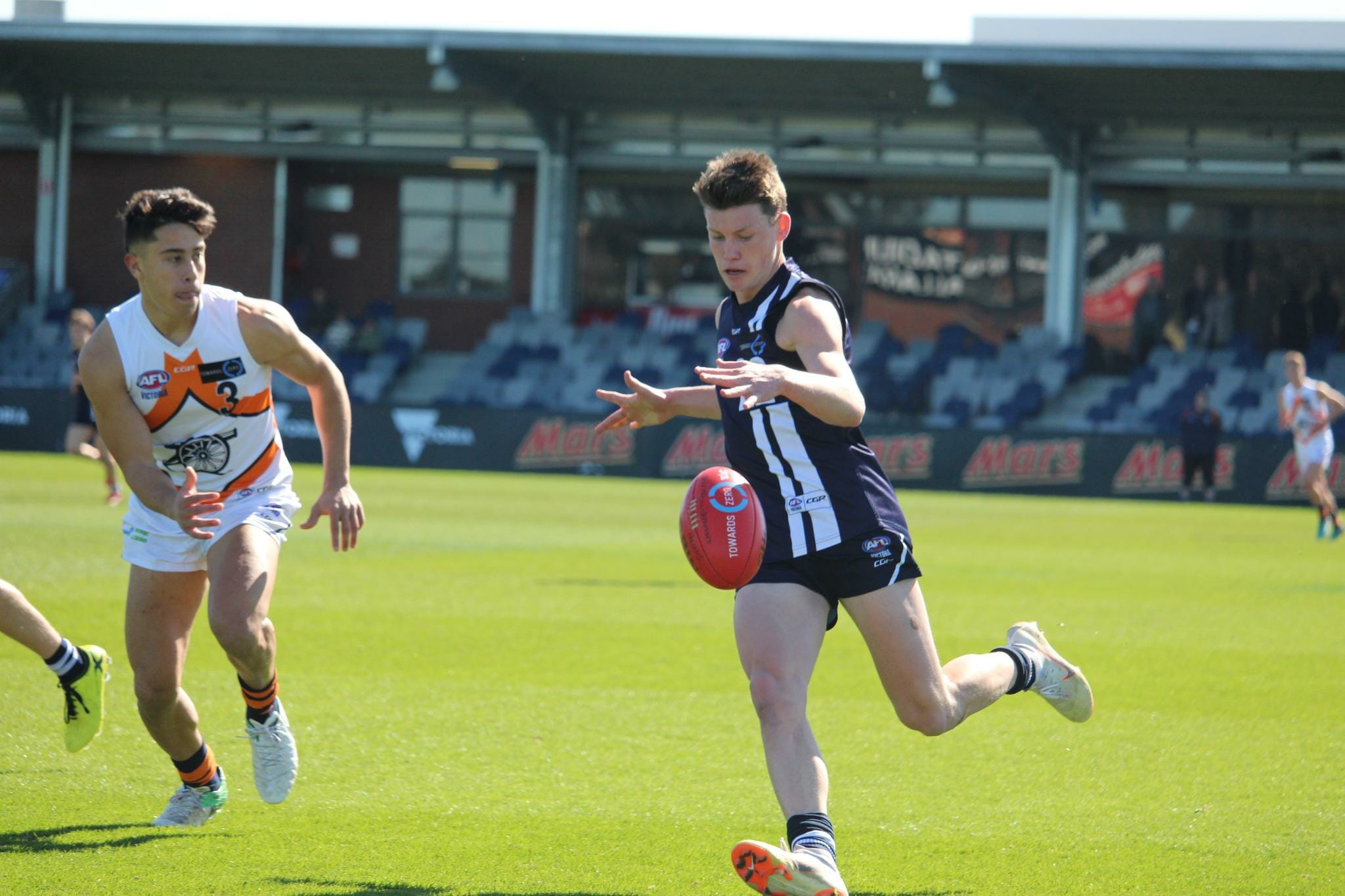 GEELONG Falcons dynamo Sam Walsh is predicted to be the front runner in Sunday’s Morrish Medal count, despite playing just the 10 games in the TAC Cup competition if the AFL Draft Central predictions are anything to go by. The number one pick contender is likely to poll votes in as many as eight games, including his last five since returning from the National Under 18 Championships. He is not alone in the stakes for the medal, with AFL Draft Central predicting a number of other contenders hot on his heels, with nine of the top 10 placegetters in our count from different TAC Cup clubs.

The Falcons midfielder has enjoyed a terrific season in 2018, firing on all cylinders since returning from the championships, and expect him to power home like Hugh McCluggage did in 2016 with a huge run home. It is almost hard to ignore him in most games, and we have him polling in eight of a possible 10 matches, and usually with the three or two votes. Some heavy losses to Geelong at times will not help, but he missed quite a few of the mid-year games where the Falcons had trouble.

The biggest challenger to Walsh is fellow captain, Gippsland Power midfielder, Xavier Duursma. He also missed games due to National Under 18 Championships, and also missed a game due to injury, but when he has played, he has been ultra-consistent. He will have plenty of teammates threatening to take votes off him such as Noah Gown, Kyle Reid or Riley Baldi among others, but if the umpires saw him as the key in many of the Power’s wins, Duursma is in with a huge chance of causing an upset.

Prior to returning in Round 9 following injury, we predicted Liam Stocker to be sitting on just four votes. Over four of the next five games we predicted Stocker would pick up 10 votes, before collecting another three on the weekend for a big weekend in the umpires eyes. He is one who could poll even better if the umpires vote him ahead of the Kings or Bailey Smith, but when they played they dominated.

The GWV Rebels forward is a bit of an unknown come Morrish Medal night because he is one who could poll regularly, or be the one that gets left behind being a forward instead of a midfielder. But his consistency through the mid-season and on the back straight is not to be underestimated, having at least three best on grounds in the run home.

You get the feeling he could be pushing Walsh if Geelong had won more games, but expect Ham and Walsh to combine for the top two votegetters on a few occasions. He has that eye-catching ability that is likely to poll him quite a few votes, but like Wilson, it just depends if they opt for that powerful forward who can play up the ground – and in defence at times – or if they opt for pure midfielders with the votes.

The Jets captain is likely to run out to an early lead in the count with a strong season pre-Under 18 Championships. Aside from a couple of quiet games in the first month, we predict O’Halloran to be on 11 votes after seven rounds. From there though others have stood out more with the votes shared around late in the season, but is sure to poll well early. It will be interesting to see how the votes are divided up between himself and Connor Thar, in particular.

It is a bit hard to read how the Cannons co-captain will poll because he spent time in the Victorian Football League (VFL) throughout the season, and will have to fight the likes of Rhylee West and Jack Bytel for votes at either end of the season. His purple patch from Rounds 12 to 14 could see him rack up quite a few votes with at least two best on grounds, and be another top 10 certainty one would think.

A slow start to the season, but once he got going, he really got going. Had the luxury of playing the majority of games, and had no trouble finding the ball. The fact he caught the eye of Vic Country coaches to be a late-call up, one would think he would catch the eye of the umpires as well.

Dandenong is the toughest team to read how votes will go. They won 15 of a possible 16 votes which means the most votes of any side. The problem? The votes are likely to be split by as many as 12 players who could float in and out as the top vote getters. Captain Campbell Hustwaite is likely to poll the most for the Stingrays, but we also have Bailey Williams, Riley Bowman, Sam Fletcher, Corey Ellison, Matthew Cottrell and Zac Foot all polling in multiple games.

In the same boat as Wilson and Ham, comes Oakleigh Chargers’ Jake Gasper. Like Dandenong, Oakleigh is hard to predict where votes will go given the high volume of top performances. Jack Ross, Trent Bianco, James Rowbottom, Isaac Quaynor and Noah Anderson are among those who we have predicted will poll solidly.

In terms of club leading vote getters of the three remaining clubs, Bendigo’s Noah Wheeler seems the clear choice for the Pioneers and will likely attract votes in the games where Bendigo got close, or won. Eastern Ranges’ bottom-ager Mitch Mellis is one of a number of players who could poll the most from the other bottom two side, while Northern has a number of contenders fighting over votes, but we have thought Josh D’Intinosante might be the top pick of the bunch. Others just outside the top 10 elsewhere are Stingrays duo Williams and Bowman, Murray trio Lachlan Ash, Hudson Garoni and Laitham Vandermeer, and Oakleigh trio Ross, Bianco and Rowbottom.

Top by club not mentioned above: