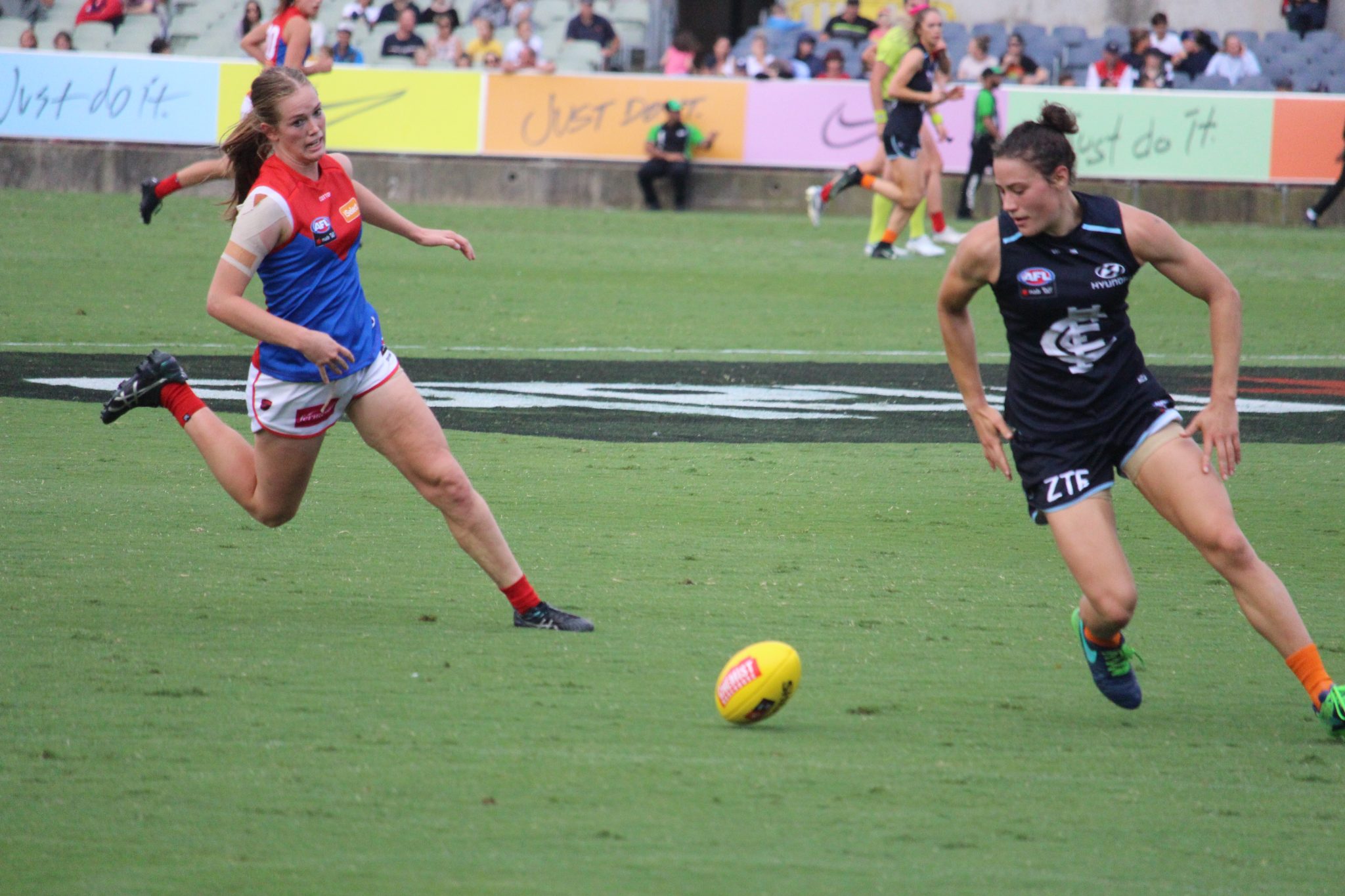 Two sides that have disappointed in season 2018 battle in what will be their season finale. The Saints can finish as high as sixth with a win and other results going their way while a loss could see them drop as low as tenth. The Tigers on the other hand can secure 11th position with a win, however a loss accompanied by a Williamstown victory could see them fall to twelfth (second last). The Saints were held goalless against the ladder-leading Pies last week, despite winning plenty of the footy around the contest. Alison Brown continued her strong stretch of play with a 24-possession performance. Tara Bohanna will have another opportunity to work her way up the goal kicking leader board, and will be looking to bounce back after a poor performance last week. Richmond should be well-prepared for the contest after it enjoyed a bye last week. The Tigers put together a strong performance in the last outing, unfortunately falling to Williamstown by one point. Many of their season-long issues seemed to be resolved in the contest, with their forward line functioning extremely well, kicking five goals, which was their highest score in quite some time. Expect a big game from Phoebe Monahan, who will look to put the finishing touches on a superb season.

Collingwood enter the final round with an opportunity to clinch top spot and a home final in the first week of September. The Pies limp into the final round, with a number of key players missing the home and away finale, including Sophie Alexander, who has been a pivotal part of their success so far this season. Jaimee Lambert will return to the line-up this week as she looks to pick up right where she left off. An impressive outing last week saw Vic Metro representative, Katie Lynch put together her best game of the season with a 24-possession game, adding to what is a huge list of contributors for the side throughout the year. Casey burst out the blocks last week, taking a quarter-time lead against the flag-fancies, Geelong in what looked to be a looming upset. Unfortunately for the Demons, they only managed one behind for the next three quarters as Geelong ran out 37-point winners. The Demons will be hoping to end the season on a high note, with the potential to move up to sixth position with a win. Despite not playing finals, the biggest success of Casey’s season without a doubt has been the development of youngster, Eden Zanker. Zanker showed plenty of promise over the summer in the AFLW season and has continued to progress nicely, showing she will be a force to be reckoned with in the coming years.

The game of the round takes place on Saturday morning with the Hawks playing host to the Cats in Box Hill. There is plenty at stake for both teams, with the winner assuring themselves at least second place and potentially the minor premiership if Collingwood was to lose. Hawthorn recorded its biggest victory of the year last week, defeating the Thunder and ending its win streak, which in turn secured the Hawks a finals spot and the opportunity to leap-frog the Thunder once all is said and done. Phoebe McWilliams was damaging in front of goal, kicking three goals from her five opportunities to go along with 12 possessions. Emma Mackie also continued her run of form with 24 possessions and two goals, while Rebecca Beeson was a ball magnet through the middle of the ground, with game-high 30 possessions. The Cats took care of business against the Demons last week and will need to bring the same intensity they showed after quarter time if they are to beat the in form Hawthorn. The win should fill the Cats with confidence as star player, Richelle Cranston had a quiet game by her lofty standards, but it was the role players who stepped up and led the side to victory. Mia-Rae Clifford produced her second consecutive strong performance, kicking two goals and leading the Geelong forward line. This is a huge game which will shape the entire finals series and give both teams a taste of finals-type pressure.

The Falcons are locked into fifth place, whilst the Bulldogs can secure sixth with a victory and ensure they do not drop down the ladder. After starting the season with no wins and four losses, the Bulldogs put together six incredible weeks of footy to put themselves at six wins and four losses, entering the final three games of the season. Two poor performances have resulted in two losses and the Dogs now find themselves eliminated from the finals. The Bulldogs have proven their best footy can match up with the best of the best and the champions of AFLW will be looking to end on a high and show the rest of the competition they will be a force next season and beyond. For Darebin, its loss last week ended any faint hopes the side had of playing a part in September. The absence of three key players, Elise O’Dea, Jessica Dal Pos and Hannah Mouncey, was ultimately too much to overcome. O’Dea and Dal Pos return to the line-up this week and should provide a huge lift for the Falcons. Melbourne AFLW teammates, Lauren Pearce and Lily Mithen were unbelievable last week and will once again be key if the side is able to pull off the victory.

The Bombers secured the dreaded wooden spoon last week after their loss to Williamstown. A win against the Blues would end their inaugural season on a high, as the club continues to build their list. With only one win to date, on paper, the Bombers’ season has been a disappointment. However, looking beyond the results it can be viewed as a positive. Hayley Bullas has proven herself to be relentless in and around the contest and has truly emerged as a star. Simone Nalder had an impressive performance in the ruck last week and showed she can be an integral part of the line-up in the future. Carlton’s season began with so much promise but much like its AFLW campaign, it will end in disappointment. The Blues have put together a good patch of footy, winning three of their past five games, including a dominant win over Darebin last week. The Blues’ accuracy in front of goal continues to be an issue however, kicking eight behinds to half-time before finally kicking their first goal. Darcy Vescio will have an opportunity to win the goalkicking title this week with a strong performance to cap off another strong campaign. Gabriella Pound has been a shining light for the Blues over the past month, cementing her spot in the side and putting together some nice games in the back half of the season.

The final game of the home and away season takes place on Sunday afternoon when Melbourne University battles Williamstown. The Seagulls have won their previous two contests after only having won one game prior. The big three starred for the Seagulls, as Jasmine Garner kicked two goals from her five shots on goal, Jess Duffin had another dominating performance with 28 possessions, and Jenna Bruton gathered 22 possessions. The three have starred all year for the side and will be lining up against a number of teammates for the next AFLW season, as they will be playing for North Melbourne. Melbourne University dominated against the Western Bulldogs last week to record its fifth win of the season and continue its late season resurgence up the ladder. Having won their past two games, the Mugars now have the opportunity to move up to as high as sixth with a win. Madison Prespakis and Ashleigh Riddell starred in the side’s win last week, with both amassing over 25 possessions. They’ll once again be key in Melbourne Uni’s quest to end the season with three consecutive victories. North Melbourne recruit and reigning AFLW Best and Fairest, Emma Kearney will be also be a key inclusion into the line-up.