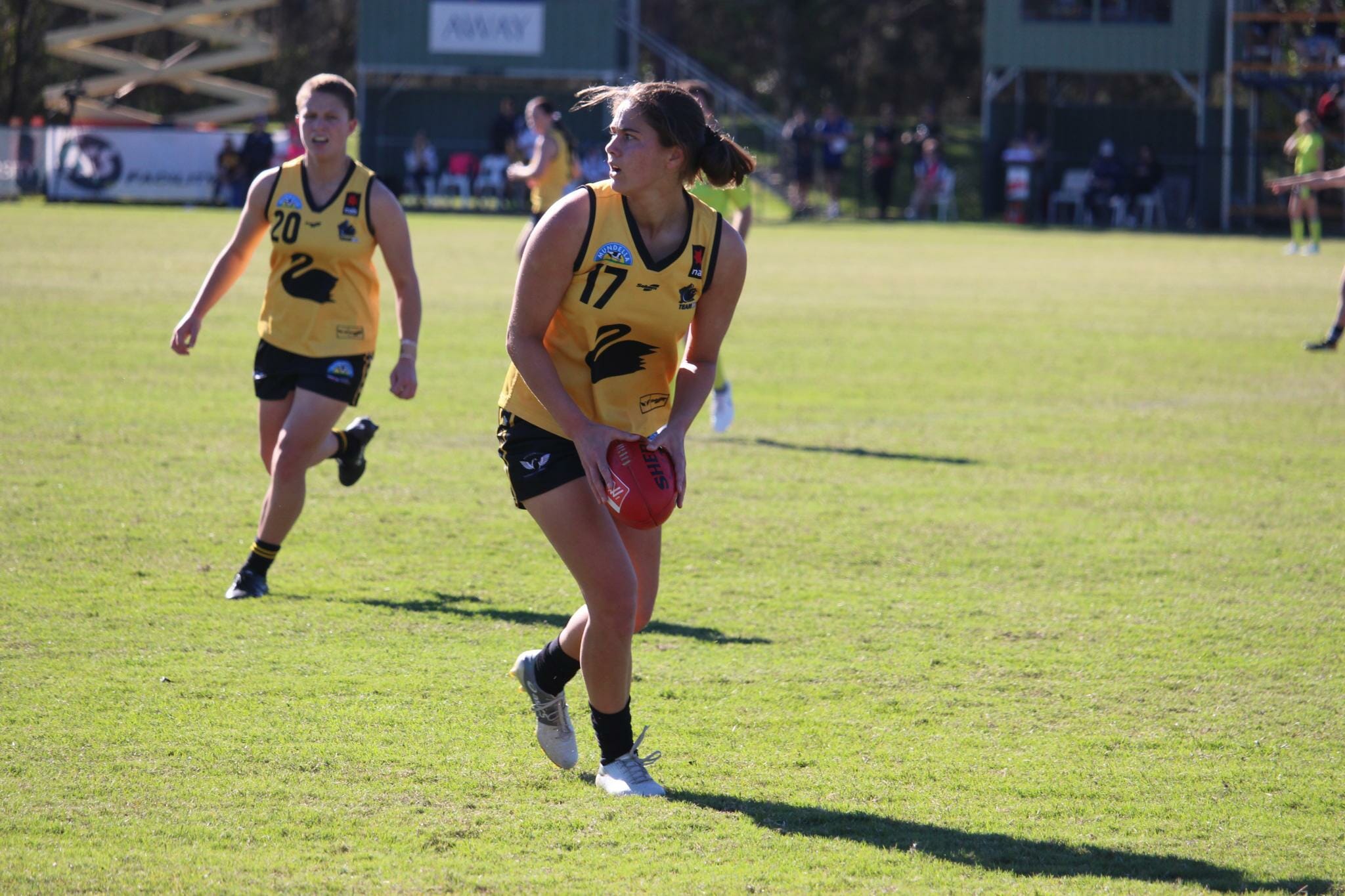 IT was a big week of preliminary finals in the Western Australian Women’s Football League (WAWFL), with two Peel Thunderbirds playing off in a Grand Final this weekend, while their seniors stumbled at the last hurdle. Subiaco took their place in the last game of the season while Claremont (Reserves) and East Fremantle (Rogers Cup) were the other teams who progressed through to the Grand Final.

Subiaco has upset the second-placed Peel Thunderbirds, progressing through to the Grand Final against East Fremantle. The Titans shocked the Thunderbirds early, kicking three goals to one in the first quarter. The goal kicking continued in the second term with Subiaco dominating, despite an inaccurate 2.6, leaving the Thunderbirds only able to score one goal. In the third term, Peel tried desperately to reduce the deficit, kicking two goals to Subiaco’s three. The late fightback continued into the last term with Peel outscoring Subiaco three goals to two, but it was too late, as the Thunderbirds lost the match by 21 points.

Amy Lavell continued her excellent season in front of goal, with four majors for the Titans on the day. Sara Lewis was also able to make it 18 goals from 18 games this season with a major. Western Australia Under 18 representative, McKenzie Dowrick also got on the board, and will now get an opportunity to continue her solid form into the Grand Final. Lauren Stammers, Courtney Stubbs and Hayley Miller were the other goal kickers for the Titans on a memorable day. For Peel Thunderbirds, it was a two-player show down forward, with Kira Phillips‘ strength and Kate Bartlett‘s smarts at ground level that saw the talented forwards combine for their team’s seven goals. Phillips finished with four majors, while Bartlett booted three, and gave the Thunderbirds a sniff six minutes into the final term when they drew within 16 points before Subiaco dashed the home side’s hopes with it’s only goal in the final term.

While their senior side fell shot to Subiaco, Peel Thunderbirds’ Reserves side have made their way into the Grand Final after defeating East Fremantle by six points. East Fremantle burst out of the blocks early with two majors, restricting the home side to one. The Thunderbirds fought back in the second term, kicking a major while holding the Sharks goalless. The goals dried up in the third quarter, with East Fremantle being the only side to manage a score, kicking three behinds. This brought the margin to just one point at the last break. But it was the Thunderbirds who were able to get that crucial breakthrough in a low-scoring affair, kicking one goal in the last quarter, which happened to be the winning goal. In the process, they also held the Sharks goalless for three quarters.

It was single goal kickers all round for both sides in the tight affair. Narelle McIntyre continued her fine season inside 50 with a major. This took her season tally to 42 goals from 15 games. Ava Muir and Bethany Bond also got on the scoreboard with a goal for the Thunderbirds. For East Fremantle, Stephanie Sparke and Emily Cowden were the goal kickers in the narrow loss. The Peel Thunderbirds will now face second-placed Claremont in the Grand Final.

East Fremantle has progressed to the Rogers Cup Grand Final with a seven-point win over South Fremantle. The Sharks struggled early, only scoring two behinds in the first term compared to South Fremantle’s goal. The performance was better in the second term, with East Fremantle holding the home side scoreless and kicking 1.4 for the term. The Sharks were then scared in the third term when South Fremantle outscored them three goals to one to take a convincing lead into the last break. But East Fremantle fought back hard in the last term, turning the tables and kicking three goals to one to secure a spot in the Grand Final.

Abbey Hunter played a huge role on the day for East Fremantle, kicking three of her side’s five majors. She was complemented by goals from Zoe Chatfield and Gabriella Radojkovich, who have both had impressive seasons. For South Fremantle, Tara Garlett and Jenna Bantick were the key players with two majors each, helping to give their side the lead for the majority of the game. Shanay Del Borello was the other goal kicker for the Bulldogs. The third-placed East Fremantle now face top-of-the-table Peel Thunderbirds in the Grand Final.