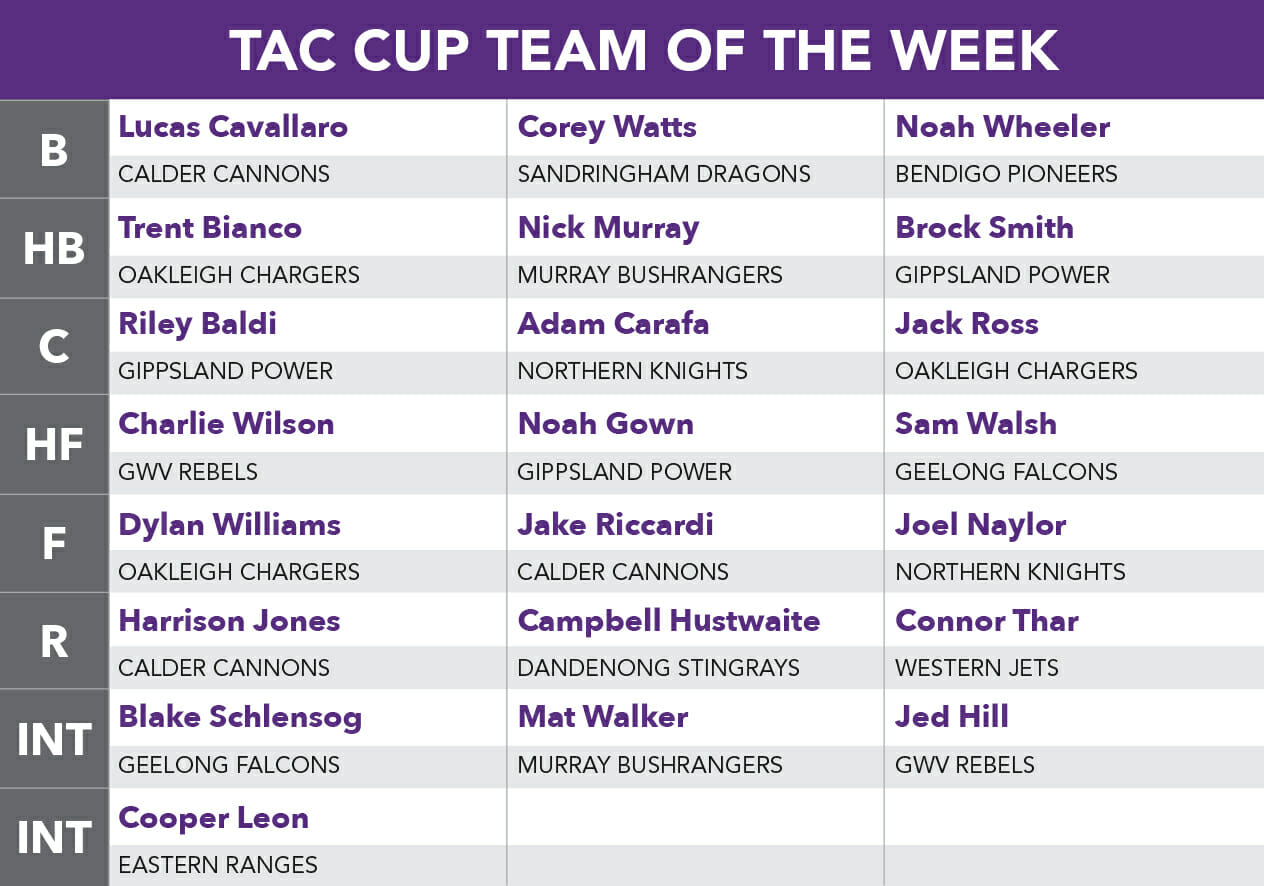 IMPRESSIVE wins to Calder Cannons, Gippsland Power and Oakleigh Chargers have resulted in each of the three sides contributing three representatives to the AFL Draft Central TAC Cup Team of the Week for Round 15. Meanwhile other winners, the Greater Western Victoria (GWV) Rebels and Northern Knights had two each, as did Geelong Falcons and Murray Bushrangers. It was an odd game between the Falcons and Dandenong Stingrays, with the Falcons recording an extra player in Team of the Week despite losing narrowly. The other four losing sides also had just the one player each.

The Cannons had three players who were crucial in each third of the ground, with Lucas Cavallaro and Jake Riccardimaking our Team of the Week once again, while ruck Harrison Jones made it into the 22 for the first time this season. Gippsland also had one in each third of the ground, with defender Brock Smith, midfielder Riley Baldi, and tall forward Noah Gown earning their places in the side, while captain Xavier Duursma came close to making the side as well, but it was a tough midfield to break into this week. Oakleigh had a couple of bottom-agers in the side, with Dylan Williams and Trent Bianco making the team, along with top-age midfielder Jack Ross.

GWV Rebels forwards who spent time in the midfield, Charlie Wilson and Jed Hill made the side again, while Bendigo Pioneer Noah Wheeler found himself in the side again for his tireless work in defence and through the midfield. Geelong Falcons star, Sam Walsh and teammate Blake Schlensog make it into the team, as does opposing midfielder Campbell Hustwaite, in a performance which was incredibly even by the Stingrays, and both Sam Sturt and Bailey Williams can consider themselves unlucky not to be in the team.

Murray might have lost this week, but utility Mat Walker and defender Nick Murray stood out, making the best 22 for the week, while Zane Barzen was another player unlucky not to make it, and would have been named a hypothetical emergency for his three goals. Northern Knights pair, inside midfielder Adam Carafa and forward Joel Naylor both made the side, as did opposing midfielder, Western Jet Connor Thar. Of the remaining places in the 22, Sandringham Dragons’ full-back Corey Watts and Eastern Ranges’ Cooper Leon both made the team.