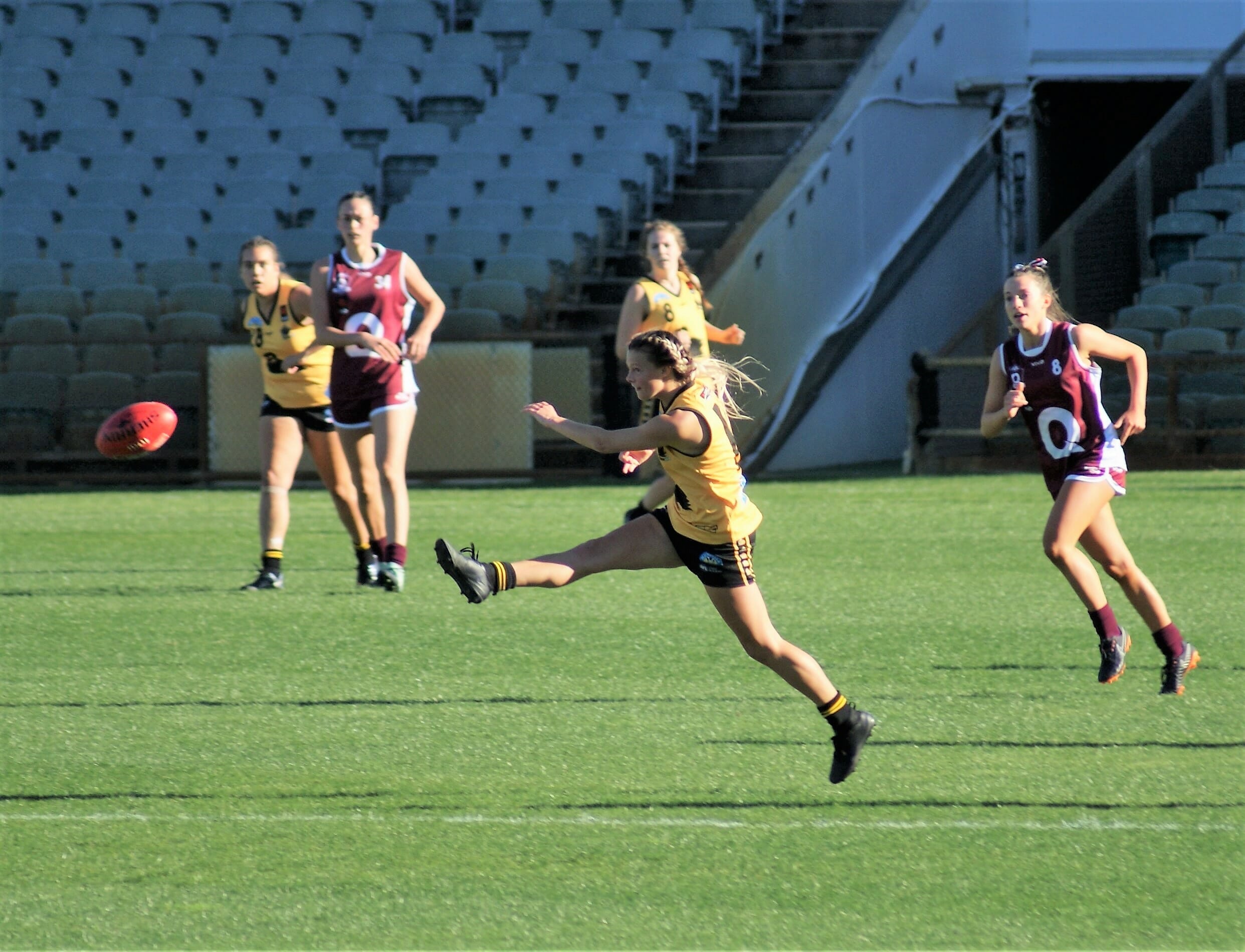 WEST Australian, Shannon Whale knows how to deal with fresh challenges. Since starting her football career at Pinjarra Tigers, Whale has played for four local clubs, captaining two of them, and winning two flags in the process. Her story, which includes making the cross-country trek to Victoria in search of improvement – is one of a teenager who has adapted to change. Now, in her top-age year, Whale is hoping all her hard work can pay off with a spot on an AFL Women’s list.

“I started my football down in Pinjarra Tigers,” Whale said. “I ended up being captain for it as well. “We won the premiership, and then the next year I was asked to join Peel Thunderbirds where I played there for that year. “Then we got to the premiership and won that.”

Determined to improve further, the West Australian teenager found an opportunity. It would mean a lot of travel and dedication, but it was an opportunity that was too good to pass up.

“Mum found a site called Rookie Me and went and I did a bit of training with Rookie Me,” she said. “They moved to Melbourne … and I went there four times a year and then after Peel Thunderbirds, I moved to East Perth just to get away from it a bit. “I played half a year there and then due to family stuff I had to move to South Fremantle which was closer to home, less of a travel. “The next year I went to Rookie Me again, got more training, a lot more. “It helped so much, Robbie Campbell and ‘Goughy’ (Lachlan Gough) and all of them, they’re just so good. “It’s a great thing; Rookie Me is so good.”

Whale is still at South Fremantle this year, but is now captain of the side. She earned a place in the West Australian team for the AFL Women’s Under 18 Championships, playing an impressive opening game before fracturing a small part in her right wrist early in the second match, ending her carnival. Whale said it was a great experience to play against the most talented players in the country, and enjoyed tackling Vic Metro on Metricon Stadium.

“It was a bit harder because they were a lot taller than us,” she said. “But it was good to compete in something that was so hard. “They put up a good fight, obviously we lost, but not by much (eight points). “It was good to be able to be in it, knowing what the next step is going to be, how hard it’s going to be, but it’s just working towards it and having fun while you do it.”

Whale said the enjoyment she gained out of playing football was something special and always looked forward to going to training.

The full pathway for young girls to transition into a national competition is something that Whale is glad has arrived and has her even more determined to play at the highest level.

“I’m actually quite happy that it’s come up and it’s still rising because it’s something that I can work towards and hopefully I’ll get in one day,” she said. “It’s just a good thing for all the young girls to start, knowing that there’s something in the end of their career for them to do.”

According to Whale, her coaches have been impressed with her ability to read the play, and position herself in marking situations. She was able to use these strengths when playing in defence at the AFL Women’s Under 18 Championships. But it also gave her a new improvement to focus on.

“I want to get more into it,” Whale said. “At the moment I’m playing backline so I don’t really get much touch of the ball unless it’s down there a lot. “But I’m always working towards trying to keep my player out of it.”

As for her ultimate goal?

“Obviously I want to get drafted into a team, if that doesn’t work then well I want to do something with coaching,” Whale said. “Then help everyone out, all the little kids out.”

Whale returned to South Fremantle in their preliminary final extra time loss to East Fremantle, managing to play the one game since her injury before the end of the season.