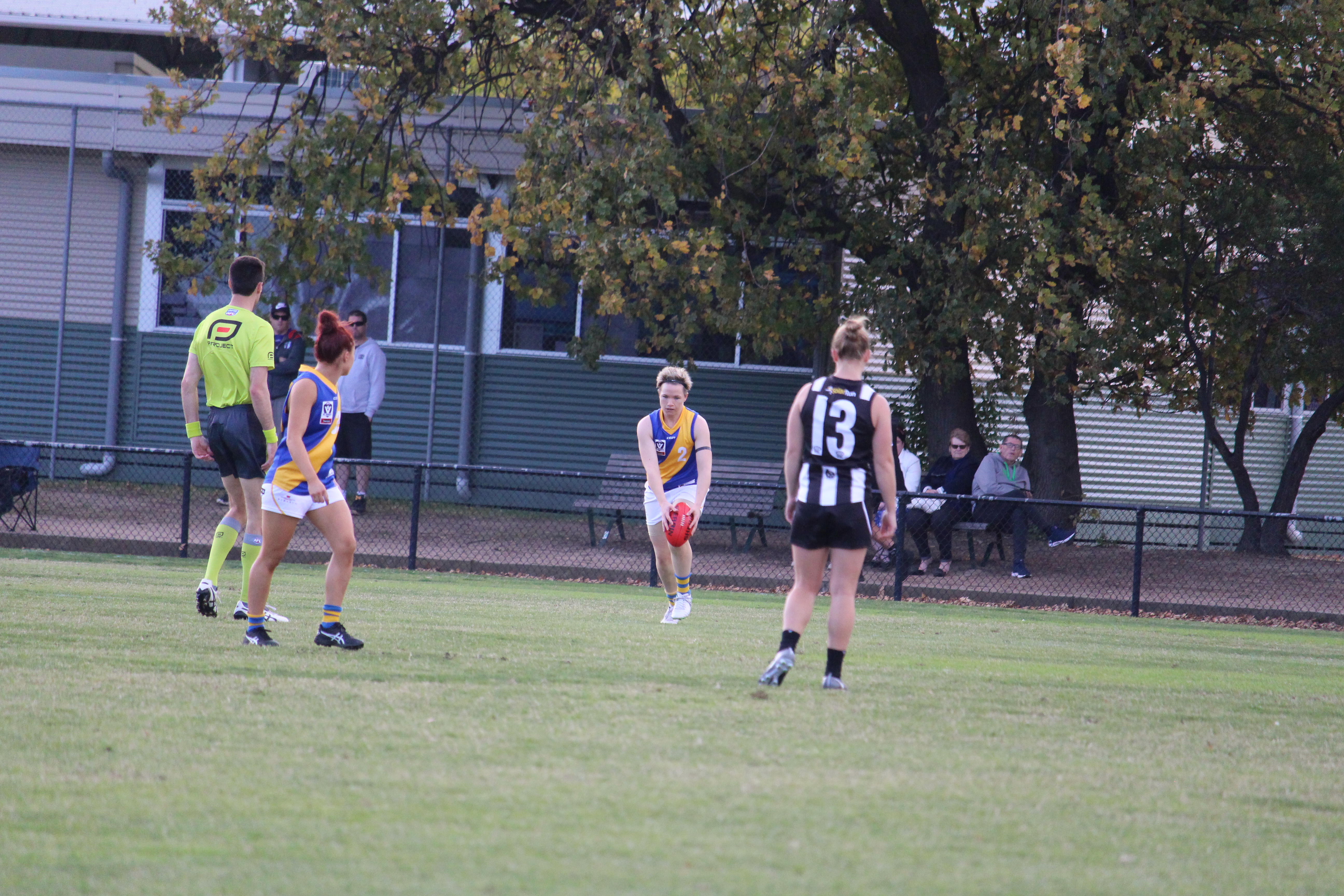 COLLINGWOOD lost its first game of the Victorian Football League (VFL) Women’s after 14 rounds of action and consequently lost top spot on the ladder. At the bottom of the ladder, the Seagulls experienced a rare highlight for their season when they clinched a thrilling one-point win over Richmond. With only two rounds to go, the ladder could still change in what looks to be a thrilling finals series.

Melbourne University has claimed a huge 53-point win over Casey Demons, courtesy of a dominant first half. The Mugars booted the only five goals of the first two quarters, with the Demons managing just the one behind in challenging conditions. With the ground wet and the blustery wind causing problems for some, the Mugars made the most of it. Casey played well in the third term, with Maddie Shevlin producing a huge 50 metre goal for the Demons’ only of the game, to outscore the visitors. Unfortunately for the home team, Melbourne University got back on top in the final term, booting two goals early to wrap up the match, and then two in the final two minutes to blow the margin out to almost nine goals.

Madison Prespakis starred again for the winners, doing some unbelievable things, including a snap out of nowhere for a goal, on her way to 28 disposals, two marks, six tackles and a goal. Captain Ashleigh Riddell was prominent with 18 disposals and an important first quarter goal, while Sophie Abbatangelo (15 disposals, four marks and two goals) and Caitlin Greiser (12 disposals, three marks and two goals) worked hard together in attack.

For Casey, Shevlin was the big ball winner, racking up 22 disposals and booting the Demons’ only goal, while Casey Sherriff was arguably the best for her clean ball use in defence, racking up 14 disposals and laying six tackles. Sherriff teamed well with Darcy Guttridge back there, who picked up 11 disposals and three marks, while Eden Zanker was promising in the ruck.

It was a good old fashioned shoot-out at Bill Lawry Oval, with both the Falcons and Saints going goal-for-goal. In a hotly contested match, Darebin looked to have broken away in the second term, but the Saints fought back to go in even at half-time. Accuracy did not seem to be a problem for either team with no behinds scored in the first half of footy, credit to their cleanliness by foot. But in the end, it was the Falcons that secured the win by four points in a very tight game to keep their finals hopes alive.

The Falcons were on song with the likes of Hannah Mouncey finding the goals and imposing herself around the contest with her strong hands. Teammates, Lily Mithen and Georgia Hammond were also impressive with their clean hands at the coal face and ability to dish off clever handballs under pressure. Down in defence, Meghan McDonald played her usual role, taking a heap of intercept marks and controlling the defensive 50 for the Falcons.

Meanwhile for the Southern Saints, Alison Brown showcased her good hands in tight, extracting the footy out of the congestion cleanly and cleverly. Rhiannon Watt provided a good target up forward and worked tirelessly throughout the match to win the footy. Courtney Jones was impressive for the Saints, opening their scoring account and getting involved in the contest, as was Alison Drennan who was influential across the ground with her silky skills.

Collingwood experienced the losing feeling for the first time this year on the hallowed turf of Victoria Park. The Pies couldn’t kick a goal during the whole second half while the Thunder kicked three crucial majors to claim a vital win, and top spot on the ladder.

Captain, Angela Foley had a blinder of a game, being one of two multiple goal kickers for the Thunder, as well as racking up 29 disposals and taking four marks. The other multiple goal kicker was 23 year-old, Jordann Hickey, who booted home two majors from her 10 disposals. In terms of disposals, Adelaide AFLW forward, Jenna McCormick led the way with 31 touches to go along with seven marks.

Vic Metro forward, Daisy Bateman was one of four single goal kickers for the Pies, and also racked up nine disposals. Her Oakleigh Chargers teammate, Hannah McLaren racked up the disposals, gathering 20 touches for the Pies. She was complemented by a great all-round game from Sophie Alexander, who gathered 23 disposals and laid six tackles. Former Murray Bushrangers defender, Iilish Ross led the way in the tackling department, laying 11 for the match.

Geelong took care of business at GMHBA Stadium, recording another big win over another cellar-dweller in the competition. This time, Essendon was on the end of the big margin, only managing two goals for the game, while the Cats booted eight.

Danielle Orr and Mia-Rae Clifford were the two multiple goal kickers for the Cats with two majors each. In the midfield, it was Richelle Cranston who dominated yet again with 24 disposals, two marks and three tackles. Geelong Falcons duo, Olivia Purcell (18 touches) and Nina Morrison (16 touches) also contributed well on the day.

For the Bombers, Hayley Bullas provided some positives with her 20 disposals, three marks and a whopping 17 tackles. She was complemented by the consistent Jessica Trend, who racked up 18 disposals, five marks and nine tackles. Trend led the way for marks in the match, taking the most grabs out of any player in the match. Alex Quigley and Monique DeMatteo were Essendon’s goal kickers.

Williamstown has recorded a thrilling come from behind win to secure its second win of the season. The Seagulls hadn’t scored a goal up to half time, but found their mojo in the second half, outscoring Richmond five goals to two.

North Melbourne recruit, Jasmine Garner had a marvelous game for the Seagulls, kicking two goals and racking up 21 disposals as well as five marks. Her fellow Kangaroos recruit, Jess Duffin led the way in disposals, gathering 30 touches as well as two marks and four tackles in another sensational performance. Jenna Bruton’s fierce attack on the ball was key to Williamstown’s victory, as she laid a game-high 12 tackles to go with her 19 disposals.

Phoebe Monahan once again led the way in disposals for Richmond, gathering 25 disposals and seven tackles. Of those 25 disposals, 23 were kicks, highlighting her ability to get the ball on the boot and penetrate it forward. She was complemented by Lauren Tesoriero, who gathered 22 touches and took three marks. Kate Dixon was a focal point up forward, kicking two majors to go with her 10 disposals.

The Bulldogs succumbed to their second consecutive loss, but this time the margin was much greater, hurting their late finals charge. The Hawks led at each break and did the most damage in the third quarter, where they kicked three unanswered goals.

The Hawks had three multiple goal kickers in Sarah Perkins (three), Emily Gilder (two), Phoebe McWilliams (two) and Rosie Dillon (two). One player that could have kicked multiple goals was Rebecca Beeson, who finished the match with one goal and three behinds. That didn’t seem to faze her though, as she was the leading disposal-getter on the ground, gathering 25 disposals. Julia Crockett-Grills and Meg Hutchins also found plenty of the footy, racking up 18 touches each.

For the Bulldogs, it was Lauren Spark who led the way in disposals. She gathered 17 touches and took six marks on the day. Ashleigh Guest was next best with 14, while Bonnie Toogood racked up 12 touches in her first VFLW game. Bailey Hunt provided some positivity for the Dogs, as she kicked a goal and led the way in tackles, laying eight for the match.