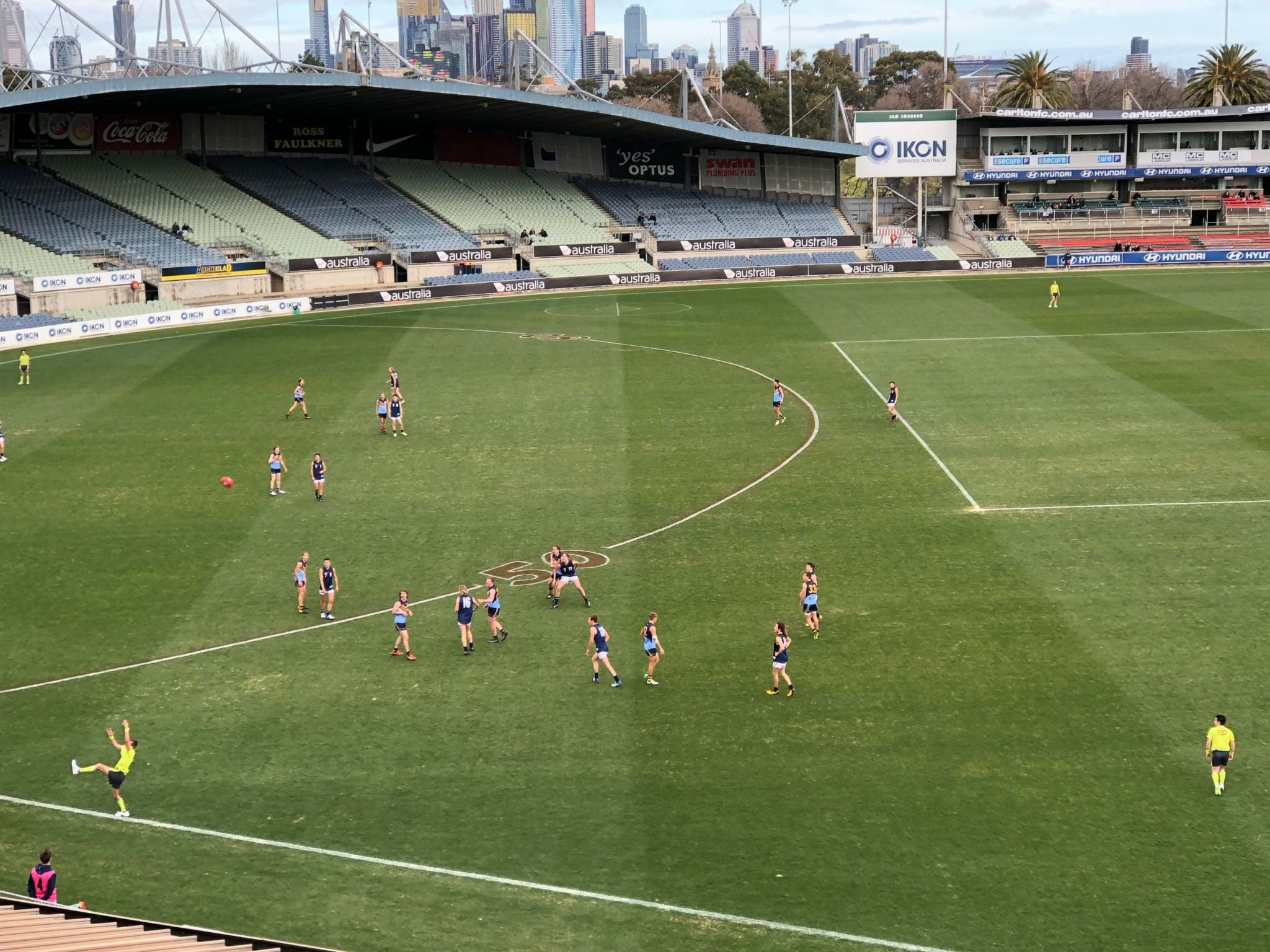 VIC Country and Vic Metro have come away with wins against Queensland and New South Wales/Australian Capital Territory (NSW/ACT) in a double header of Under 17 Futures action at Ikon Park yesterday. Both games ended up being close contests, with Country narrowly winning by 10 points, and Metro booting the last two goals of the game to foil a NSW/ACT comeback in the final term to win by 11 points.

In the first of the double headers, Gippsland Power’s Josh Smith (seven disposals and three marks) seemed to be far too strong for his opponents, booting four goals in what was a low-scoring affair. Country lead by three points at the first break, but three goals to zero in the second term saw Queensland flip the game on its head and lead by 16 at the main break. Country dominated the early part of the second half, but failed to capitalise on some serious forward thrusts, booting 2.7 to 0.0. in a complete one-sided affair. They held a narrow three-point lead at the break, and looked good going into the last, but two goals to William Martyn in the final term gave the home side something to think about. Despite their inaccuracy, they extended the margin to 10 points by the final siren.

The Gippsland contingent in Vic Country was superb, with Riley Baldi (15 disposals, six marks and five tackles) winning the football with ease in the first half playing midfield, before playing at either end in the second half. Along with Smith’s four majors, Fraser Phillips (10 disposals, five marks and three inside 50s) was also impressive with some low bullets inside 50, and booting an early major in the first term. GWV Rebels’ duo Mitch Martin (17 disposals, three marks, three clearances and three inside 50s) and Izaac Grant (12 disposals, two marks and four tackles) were clean and concise with their ball use in transition. Meanwhile James Schischka (18 disposals, six marks, three tackles and five rebounds) was impressive off half-back as was Darcy Chirgwin (18 disposals, two marks, three clearances and four inside 50s) through midfield and Flynn Perez (19 disposals, five marks, four inside 50s and a goal) all around the ground.

For Queensland, Ashton Crossley (26 disposals, seven marks, five tackles, four clearances, three inside 50s and seven rebounds) – brother of Gold Coast’s Braydon – was very busy in the midfield, teaming up with Allies Under-18 representative Connor Budarick (14 disposals, three marks, eight tackles and three rebounds). Martyn proved clutch in the final term with his two goals, while the likes of Thomas Jeffrey (11 disposals and four marks) and Bruce Reville (13 disposals, two clearances and three inside 50s) were impressive. Sampson Ryan (nine disposals and 18 hitouts) showed some promising signs for a taller player, while Josh Gore booted a goal from 14 disposals, six marks and four tackles. Joshua Hammond had a relatively quiet game, with only the three touches, but had a multitude of spoils.

In the other game, Vic Metro got the job done against NSW/ACT despite a last quarter scare. Metro was on top of their opponent in the first term, booting four goals to two, leading by 14 points at quarter time. The Rams hit back in the second quarter with a four goals to one term to lead by five points at half-time, before Metro regained the ascendancy. Booting five goals to one, the home side lead by 25 points and looked likely to run away with the game. But a five goals to three final term saw NSW/ACT come within a kick in the final quarter, before Brodie Newman booted two late goals to seal the game for Metro, 13.13 (91) to 12.8 (80).

Both sides had plenty of goal scoring options, with six players booting multiple goals across both sides. Western Jets duo Josh Honey and Lucas Rocci both booted two majors, as did Newman and Northern Knights’ prospect Josh D’Intinosante. For NSW/ACT, Cameron Edwards finished with three goals, including one brilliant snap in the final term to bend around the post for a major, while Jackson Barling booted two goals in the first term, and Thomas Green launched two goals from almost the exact same spot just inside 50.

For NSW/ACT, Green (27 disposals, seven marks, 10 tackles, five clearances, four inside 50s, three rebounds and two goals) looked a class above, with he and Liam Delahunty (23 disposals, seven marks, two clearances and seven rebounds) living up to the high expectations as some of the state’s best prospects next year. Delahunty predominantly played back but went forward in the final term and had a couple of chances which just missed. Edwards was the most dangerous small up forward, but had what looked to be a bad hamstring injury in the dying minutes of the game. Hamish Ellem (11 disposals, three marks, nine hitouts, four clearances, four inside 50s and a goal) and Adam Whyte (12 disposals, six marks and four rebounds) were really good around the ground, while Barling’s two first quarter goals, and Will Chandler‘s (10 disposals, five marks and two inside 50s) work in the forward half was appreciated.