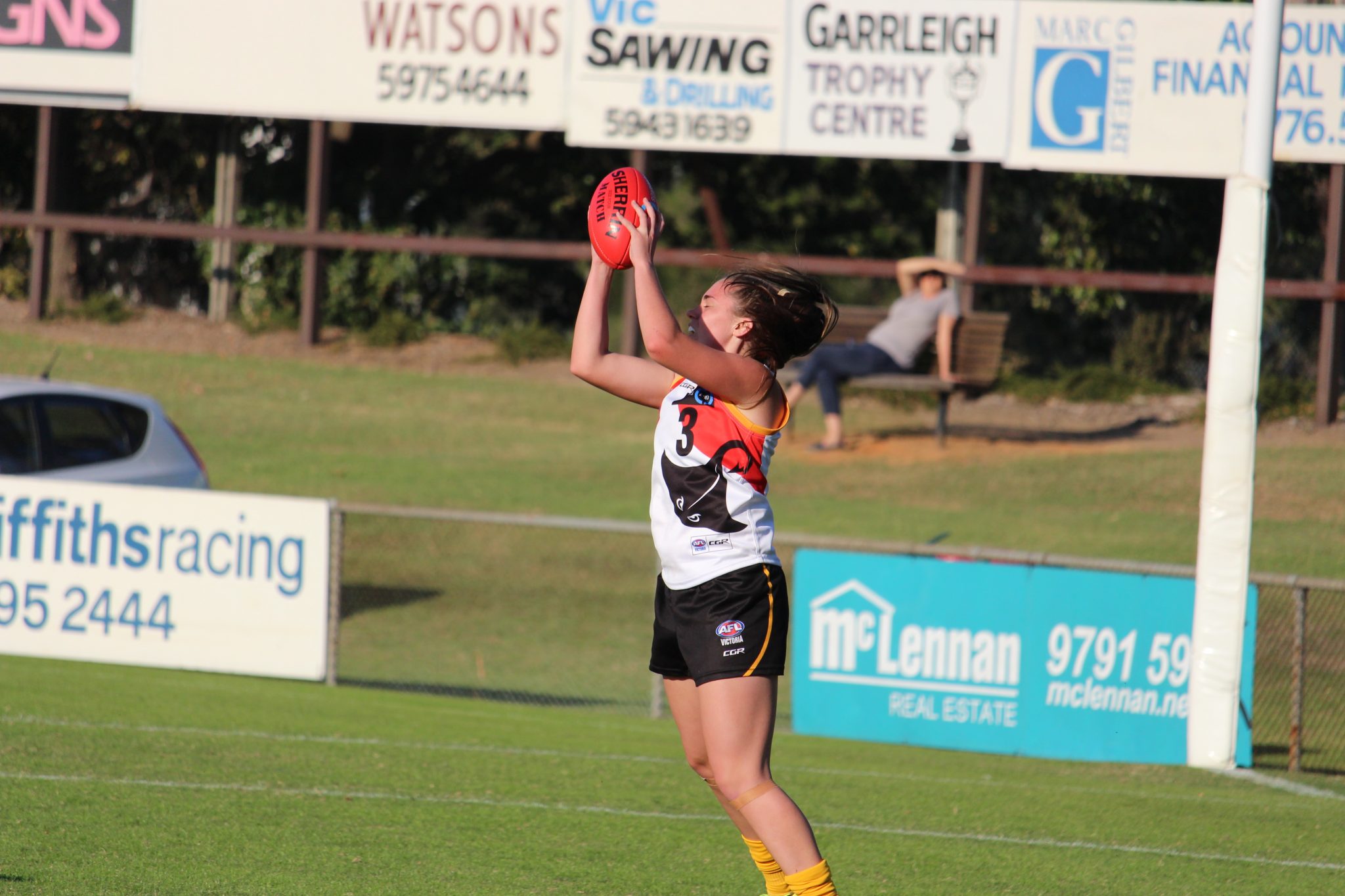 HALLAM Secondary College defeated reigning premiers, Ballarat Grammar by 14 points on Wednesday in the Herald Sun Shield (HSS) Division 1 Senior Girls Grand Final, in what was a great performance by the underdogs. Hallam has now abolished that underdog title, having now won three premierships and being the most successful school in the competition, along with their opponents on the day, who have also won three grand finals. We were there to note down the memorable performances.

Displayed good run and carry on the day, as she was not afraid to take the ball under her arm and run. Delivered a nice kick forward and did the same in another instance, when she dodged her opponent and got the kick inside 50. Read a kick well when she followed the low ball and took a good crouching mark off a full-back kick-in. Ward was able to provide exciting run and carry down the boundary line, displaying good pace.

Browning was named the best-on-ground for Hallam after a fantastic game in all areas of the ground. She executed good run and carry out of a stoppage and surprised everyone with a nice kick from outside 50 that sailed through for the first goal of the day. Took some good marks on the day, displaying strong hands. Browning kicked her second long range goal when she absolutely booted it once again from outside 50 and watched it sailed through the big sticks. The Collingwood Victorian Football League (VFL) Women’s player was able to execute long kicks on the day, clearing the ball into space for her teammates. Executed a great running clearance and followed it up with another long kick that looked like it was going to go through the goals again, but it fell short. Was also agile on her feet, executing a good pick-up and fend-off, which wowed the crowd. Did well in another instance to wait for the ball and then pick it up and kick it, rather than dive on it or run past it.

Picked up the ball well off the deck and gave off a quick handball, highlighting her ability to play on when needed. Struylaart did well to boot the ball out of defensive 50 with a good kick towards the line. Her kicking in general was good, as she was able to deliver a nice kick into space in one instance and a good pass to Ky-ya Ward in another instance. Another good kick inside 50 landed on the chest of Dandenong Stingrays teammate, Courtney Jones, highlighting her ability to spot options. Struylaart also had a good clearance out of the middle of the ground and delivered a nice long kick inside 50.

Jones was a focal point up forward for Hallam on the day. She executed an excellent pick-up and dribble kick through the goals for Hallam’s second of the day, which was a remarkable kick. Jones displayed strong hands on the day, taking a good mark running back with the flight and another inside 50 on the lead. From this grab, she made no mistake from an easy angle close to goal, booting through her second major of the day. A highlight of Jones’ game was when she took a mark at the top of the 50 metre arc, sold some candy, weaved one way then the other, took a bounce then got brought down but still managed to give away a handball on the ground. Was able to pick up the ball cleanly in the middle of the ground in one instance and execute a nice banging kick around her body inside 50. Read the play well to trap it and get it inside 50.

Was named best on ground for Ballarat Grammar in what was a great game by her. Showed good strength to keep her feet when she got bumped, as she stood up and kept running forward, demonstrating her hunger for the footy. She was back in the contest not long after and kicked a great ball to Renee Saulitis. Executed a good trap while running after the ball, giving herself time to use the ball cleanly. Thompson showed clean hands in another instance when she picked up the ball and displayed great run and carry.

Gave off a good handball on hands and knees while being tackled, showing her strength in the contest. Executed a good pick-up and quick kick down the line to a teammate. Simpson followed up these efforts with another excellent pick-up and a burst of acceleration to run and carry the ball. Also laid a great diving tackle on a player who was running and carrying.

Displayed great run and carry and acceleration into the forward line. Followed this up with a good pick-up off the deck, a burst of acceleration and a precise kick. Murray also won a free kick and lobbed a nice ball to the top of the square. A highlight of her game was when she took an excellent one-on-one mark where she had to turn her body to take it. This was crucial as it got the ball out of defensive 50.

A really exciting player who worried her opponents when she went near the ball. This was demonstrated when she fended off her opponent and kicked it forward. Also picked up the ball cleanly off the ground and delivered a nice spearing pass inside 50. In another instance, Wuol bullocked through the contest and kicked it forward, demonstrating her exciting pace and strength. She stood tall and took a good mark, and complemented this with a great pick-up of the ball in space. Also demonstrated great acceleration when streaming towards goals.

Took an excellent juggling mark in the goal square over two players, demonstrating strong hands. Fasham kicked Ballarat’s first goal late in the second quarter, beginning the surge of momentum for her side. Executed a great pick-up on the boundary line and then accelerated inside 50. Fasham had the ability to get and go, especially inside 50. It was clear that she always had the goals on her mind, as she executed great run and carry when she got the ball in hand.

Caris was fantastic in the ruck, winning many taps down to her midfielders. She also had a great leap, getting up high in the ruck to give her opponent no chance of competing with her. A highlight of her game was when she executed a good tap-down in a stoppage straight to her midfielder, displaying good vision to spot her free in space.

Saulitis took a good mark on the boundary line and kicked Ballarat’s second goal of the day with an excellent snap. Also executed a good pick-up and fend-off while running inside 50, combining her speed and smarts. She won a free kick after being pushed off the ball and used it well. One of the more consistent players for Ballarat on the day.