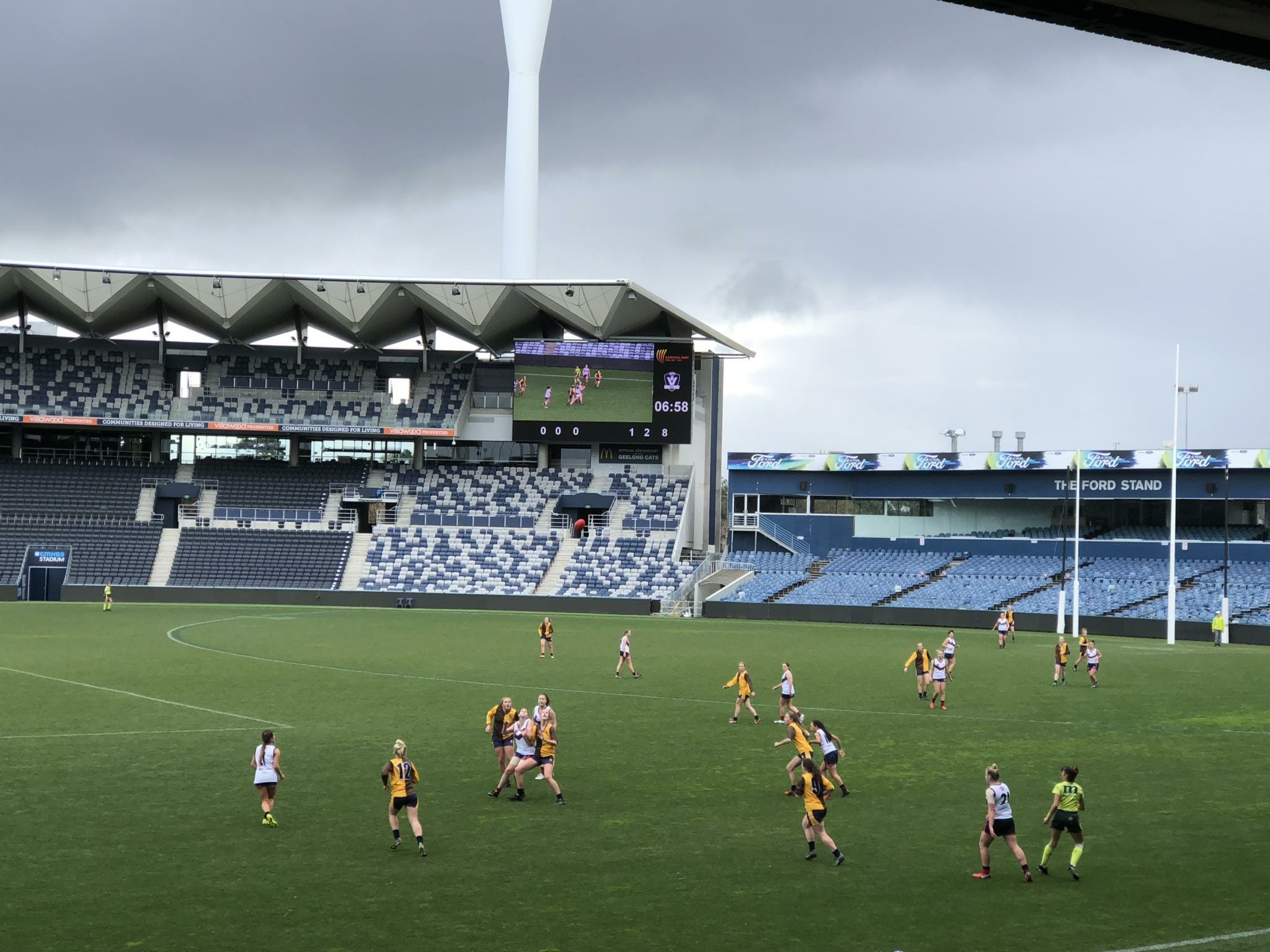 HALLAM Secondary College has taken out the Division 1 Senior Girls’ Herald Sun Shield yesterday after defeating reigning premiers Ballarat Grammar by 14 points at GMHBA Stadium in Geelong. In blustery conditions, it was an odd game which saw Hallam dominate for the first 20 minutes – scoring its total score by the second minute of the second quarter, before Ballarat kicked into gear. Scoreless to that point, the reigning premiers booted the final two goals of the game, but missed a number of opportunities in a game they controlled for the majority of the second half. Praise must be given to the Hallam defence which stood up for the best part of 45 minutes under fierce pressure. We recap how the game went down.

Ballarat ruck Maggie Caris won the first tap but it was Hallam that got the clearance and had the first behind on the board. Nyakoat Wuyol looked good early taking the game on fending off an opponent and driving the ball forward. Renee Saulitis had an early snap but it just went across the face for a throw-in. Brooke Struylaart had a big clearance out of defence moving up and down the ground well. Wuyol was winning plenty of the football and looking very good. A quick clearance out of defence only went as far as Sarah Tilley who kicked inside 50 and found a target in Courtney Jones who had a shot but it went to the right for a behind. Then all the hard work paid off with Emily Browning nailing a goal from long range.

Browning provided a target overhead and took a strong mark on the wing, while battling with Caris in the ruck. Struylaart used her smarts to win a free on the wing by receiving an out on the full call off the boot of an opponent. Another shot on goal from Jones also just bounced the wrong side of the goal posts. Caris worked hard at ground level and was plucking the ball cleanly. Browning protected the ball drop at half-forward and her long kick inside 50 saw Jones pounce and kick a ripper from the pocket, bouncing it home. The tackling pressure of Hallam was showing with Eliza Snehotta winning a free and then Brianna Gonzalez having a set shot. Her shot missed, but Hallam was trapping the ball inside 50. Jones marked strongly outside 50 and then received a penalty for crossing the mark, played on but her shot missed. Then moments before the siren, Browning gathered and bombed long from outside 50 to bounce through and give Hallam a 23-point lead at the first break.

An early kick inside 50 by Struylaart was intercepted by Wuyol with a strong mark. Struylaart’s next kick inside 50 was perfect to the advantage of the running Jones who made no mistake for another goal to Hallam. Kylee White befitted from a nice run from Ky-ya Ward down the wing, while she could not quite capitalise by hitting a teammate, she did win was a few possessions up the forward end. Ballarat ran the ball down the other end which saw Jorja Hammond win the ball and kick inside 50. While a free against was given, a terrific pass inside by Brook Thompson found Saulitis who had a shot from 40m out but the kick just fell short. Hallam was driving forward again, but the work of Wuyol again stopped them in their tracks. Katerina Stylianou had been enormous on the last line taking a number of intercept marks from shots on goal.

Browning had worked back into defence and won a free for too high after winning a contested ball. Amelia Monk moved well out of a stoppage inside 50 but was run down from behind before she could have a meaningful shot on goal. Hammond had a close miss with a clever snap, but Ballarat was doing all the attacking. Isabella Robson won a free for too high but somehow Hallam won it back and Jones tried to sell candy, which worked until the second tackler allowing Ballarat to clear it through Wuyol. Emily Fasham then finally put some scoreboard pressure on as a reward for effort, standing tall in a one-on-one and kicking a goal from 15m out. Browning bombed long out of a stoppage and gave her side half a chance to respond, but the siren sounded soon after and Hallam lead by 22 points at the half.

Robson got busy early with quick hands out of a pack to the outside, as Ballarat had the first couple of inside 50s. Jessica Lidsey won a decisive tap for Hallam and her teammates cleared to the wing and got it clear of the danger zone. Jones showed all of her skill at half-forward to cleanly pick it up off the deck, get her hands clear and handball to a teammate. Ballarat worked it down the field but again Hallam’s defence was up to the task with Tameka Youn clearing and then mopping up again, giving it to Lucy Grocock who used great speed to run along the wing and kick to half-forward. Back and forward it went with Monk having a highlight-reel worthy pick up and turn to kick forward. Neither team was giving an inch. Pip Metcalfe marked inside 50 and kicked lace out to a teammate but it was spoiled by another teammate in miscommunication.

Then the constant inside 50s paid off with Frances Murray putting it to Saulitis who used all her smarts to wrestle from an opponent then snap off a few steps and bend it sweetly around the post. Meanwhile Jones had moved into the midfield looking to make an impact, winning a big clearance from the next centre bounce. Saulitis tried to run through a couple but was gang-tackled and brought down at half-forward. Browning used her strength on the wing to stand up in a tackle and handball clear. Jones was winning plenty of the ball and working hard in transition to kick it inside 50. Murray took a strong grab at half-back in a one-on-one, with Saulitis picking it up but she was quickly wrapped up by Rebecca Lia. Wuyol had an eye-catching dash across the half-forward line but Hallam once again stood tall and cleared it. Ward won the ball at half-back for Hallam, shrugged off a would-be tackler and kicked long, but once again it would be coming back as Ballarat was throwing everything at the game. In the dying seconds, Saulitis shrugged off a tackler and tried to kick to a dangerous position but her kick was caught in the wind and blew out of bounds with the siren sounding, Ballarat still down by 16 points.

The first meaningful inside 50 of the fourth quarter was to Ballarat but Devi Whelan cleared it strongly. Hammond marked in front and had a set shot on goal but it fell short and went off hands for a behind. Ballarat was in control of the game in the final term but could not put the scores on the board. Grocock kicked out of  defence and Lidsey was rebounding well with a good mark on the last line. Wuol stepped around an opponent inside 50 and kicked a lovely goal only for the cheers from the Ballarat faithful to be replaced by groans as Hallam was awarded a free kick and the goal disallowed. On the wing from a throw in Caris had a tap to Alice Astbury who cleanly kicked inside 50. No-one could mark it and it was cleared.

The football was entertaining and end-to-end stuff as Saulitis had another chance on the run but it hit the behind post. Fasham had a long range shot from just inside 50 and while it drifted wide, Hammond managed to win the ball and had a chance before being run down by Ward. Moments later Saulitis won a free kick and had a shot but again dropped short to the goal square and was cleared. Chance after chance presented itself but the Hallam defence seemed up to the task as the blustery wind caused havoc for the shots on goal. Then despite not scoring since the second minute of the second term, the siren sounded and Hallam was declared winners. Browning deservedly won Hallam’s best player in the win, while Brook Thompson was awarded Ballarat’s best.