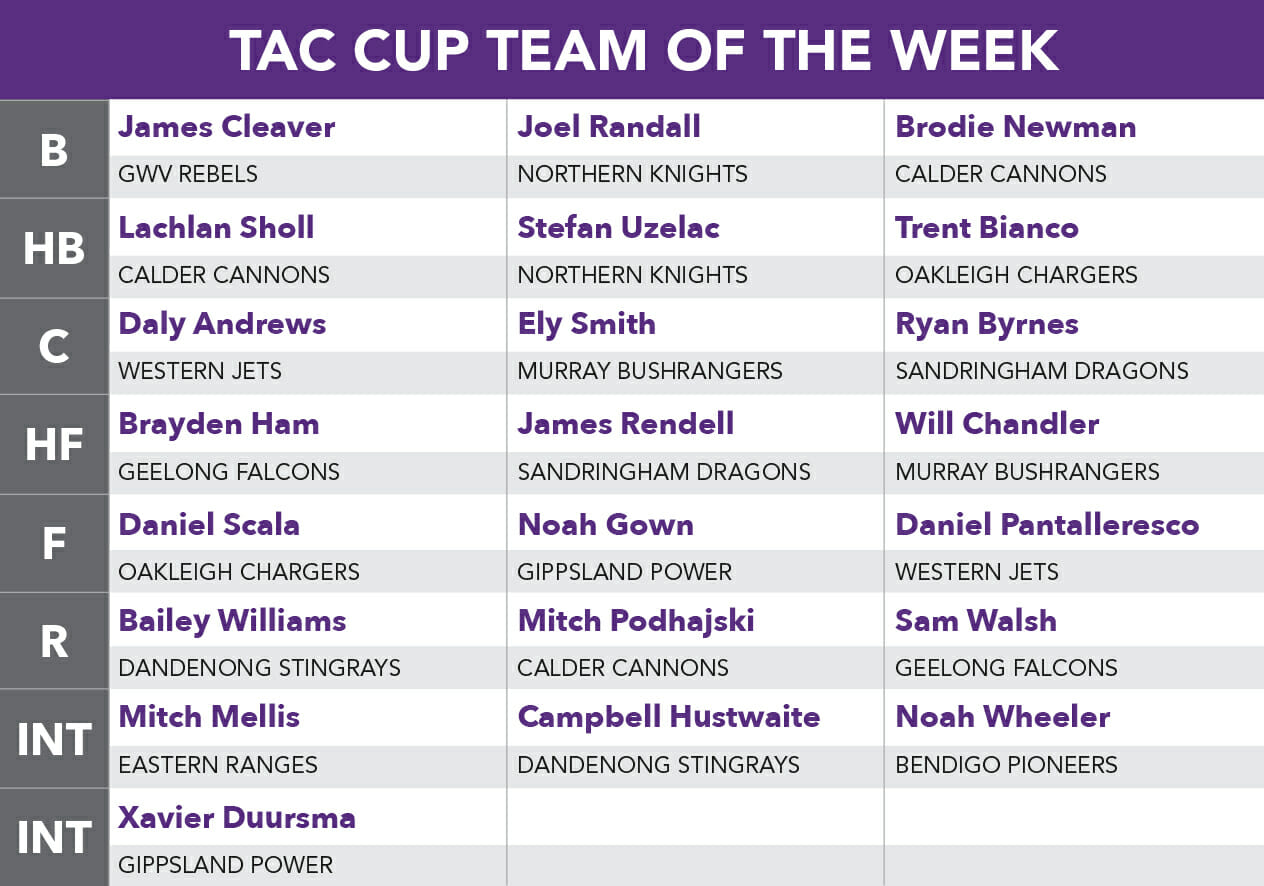 CALDER Cannons’ important win over Murray Bushrangers has seen the Cannons rewarded in the AFL Draft Central TAC Cup Team of the Week, with three players making the side, the only team to have that many for Round 14. Their opponents the Bushrangers, the five other Round 14 winners, and Round 14 losers Northern Knights and Oakleigh Chargers all have two players in the side in a remarkable spread of talent across the competition, while Bendigo Pioneers, Eastern Ranges and Greater Western Victoria (GWV) Rebels have one player each in the side.

Calder co-captain Mitch Podhajski produced another remarkable best on ground performance to make the Team of the Week once again, leading from the front in the midfield. He is joined in the side by Lachlan Sholl and Brodie Newman who were vital in the back half of the ground. Up the same end, Will Chandler booted four goals for the Bushrangers to make Team of the Week for the second consecutive week, while Team of the Week regular Ely Smith is back into the middle once again.

Dandenong Stingrays’ ruck/forward Bailey Williams made it back-to-back Teams of the Week in the ruck, joined in the side by captain Campbell Hustwaite, while fellow midfielder Finlay Bayne was one of the unlucky ones and a hypothetical emergency. Their opponents Northern Knights were strong in defence, as Joel Randall and Stefan Uzelac were called up to be the key posts in this Team of the Week, while Sam Philp just missed out on the side, and was another emergency.

At Warrawee Park, the game between Oakleigh Chargers and Gippsland Power was a thriller and saw four players make the side. Tall Gippsland forward Noah Gown continued his strong form and was named up forward, along with captain Xavier Duursma on the bench. Trent Bianco racked up 40 touches for Oakleigh and was named AFL Draft Central’s TAC Cup Player of the Week for Round 14, while Daniel Scala booted four goals playing the perfect small forward role in attack.

Two Geelong players who have also become regulars in the Team of the Week are back in again, with co-captain Sam Walsh and utility Brayden Ham included in the 22. They are joined in the side by Sandringham Dragons pair Ryan Byrnes and James Rendell who both had impressive games on the weekend. Kai Owens was unlucky not to make the side, being named the third hypothetical emergency.

On the other wing to Byrnes is Western Jets speedster Daly Andrews, while forward Daniel Pantalleresco‘s five majors saw him make his debut in our Team of the Week. The three remaining players who are sole nominees for their side are Noah Wheeler (Bendigo Pioneers), Mitch Mellis (Eastern Ranges) and James Cleaver (GWV Rebels).