IT has been a wet old winter on the west coast and this week was no exception. It is always fascinating to see how individuals adapt in these conditions as it can be a key element of being a good all-round player.

Find out below who excelled in the gloomy conditions and whether South Fremantle took a major step in their quest to seal the final spot in the top five.

Subiaco underlined their favouritism for the 2018 Colts competition with a very solid 38-point win over Swan Districts at a sodden Leederville Oval on Saturday morning.

The Lions came into the contest on the back of seven straight wins to be sitting pretty with a one game lead over Peel heading into the final month of the season, while Swans had suffered a slight dip in form of late but registered a vital victory against their top four rivals East Fremantle last week.

The players were greeted with a waterlogged ground due to a week of steady rain, topped off by a overnight downpour meaning that it wasn’t necessarily going to be pretty to watch but effective and smart football was the order of the day to get the four points.

The start of the game saw both teams look to adjust to the ground conditions and it was Subiaco who made the stronger start through a mark and goal by ruckman Xavier Peacock. After Swans had a fair bit of play in their forward 50, a very smart piece of play occurred from Nathan French where he soccered the ball from 35 metres and it skidded through for their second goal of the game.

The outer wing was favoured in a attacking sense by both sides due to it being a lot drier than the members side of the ground. Swans were certainly getting their hands to the ball but the only thing missing was their finishing touch in front of goal. However, they remained well in the contest due to the difficulty of kicking a big score because of the conditions.

Scoring was at a premium in the second quarter with only one point registered in the opening 16 minutes. Zane Shellabear Healy broke the drought soon after when he snuck out the back from a stoppage to snap truly and that was soon followed by key forward Jack Mayo picking up a ground ball and kicking a goal from 40 metres.

Swans were being out worked and seemingly lacked any system heading into their forward 50. The Subiaco running fleet of Liam Hickmott, Tristan Hobley and Shellabear Healy were having a field day in the conditions racking up close to 60 possessions between them for the first half. Subiaco went into the long break leading by 23 points and looking on track to push their winning streak to eight games.

The Lions got off to the perfect start in the third term when Hobley continued his fine first half performance with a goal. The Swans finally kicked their first goal of the game five minutes in when Harry Edwards sharked the ball brilliantly to kick truly from 35 and finally gain a bit of momentum. However, Shellabear Healy was once again able to sneak out the back and make himself available to mark and goal from the goalsquare.

Swans were striving to move the ball quickly but the delivery was poor and they were breaking down across half forward where Subiaco were able to mop up and get the ball out of danger. The visitors’ day was summed up when a long bomb was delivered by Hobley deep into the goal square which was dropped on the line by the Swans defender and ever the opportunist, French was on the spot to soccer home his second of the contest. A fine chase down effort by Blake Pescud was one of Swans few highlights in the term but unfortunately his kick on goal did not match his effort. Subiaco turned for home with a very impressive 38-point lead and Swan Districts needed some kind of miracle to stand a chance in the final term.

Some good work to start the final term by Benjamin Taylor saw Max Bradley kick his first and his team’s second of the game. Strong forward line pressure soon set up another chance for the visitors and 16 year-old Ayden Cartwright duly delivered. For the first time in the game, Swans had put Subiaco under a sustained pressure by kicking consecutive goals, but with a commanding lead it was not a case of panic stations for the Lions. The visitors were controlling the possession of the ball and inside 50s but  needed a focal point to make the most of their hard work.

Any doubt over the result was sealed when Kye Barker attempted to switch from defence but his kick was intercepted by Mayo who converted from close range. Another mistake this time from Brenton Hilton soon after gave Mayo his third goal, a fine effort by the key forward given the conditions.

In the end it was a comprehensive win by the Lions as they won their thirteenth game for the 2018 season. The complete performance by the Lions was highlighted by the fact that they won three of the quarters and the fourth term was 2.2 apiece. A main factor behind the Lions victory was 75 more disposals (359-284) which led to 12 more inside 50s (40-28) and eight more scoring shots (14-6).

Peel Thunder kept up the pressure on Subiaco by remaining one game behind the Lions with a hard-fought nine point win over East Perth at Bendigo Bank Stadium.

After trailing by three goals at quarter time, Peel hit back to only trail by a point at the long break and then led their opponent by two goals with a quarter to play. The Royals narrowed that gap in the final term but couldn’t get any closer than eight points as Peel sealed their eleventh win for the season and importantly moved two games clear of Swan Districts and East Fremantle in third and fourth.

It was remarkable that East Perth stayed as close as they did as they had 24 less inside 50s for the game (50-26) but were extremely efficient as they generated 18 scoring shots from those entries. Like he has done for a great majority of the season, Lachlan Riley was a key figure for Peel with 25 disposals, four marks and four tackles while Killian Rawson was lively with three goals. Meanwhile, for East Perth, Jarrod Hamer-Mathew was important with three goals from his eleven disposals while Damon Greaves was solid with 20 disposals, four marks and four tackles.

West Perth have given themselves renewed hope of playing finals in 2018 after a convincing 28 point win over South Fremantle at Fremantle Community Bank Oval on Saturday evening.

The Falcons were never headed throughout the contest leading by 13 points at quarter time, 17 points at half time and 34 points at three-quarter time. The Bulldogs who had kicked just one goal over the first three quarters showed some heart in the final 25 minutes by winning the quarter two goals to one, but the damage was already done as West Perth drew level with the Bulldogs on points although they have played a game more.

You can throw a blanket across the teams sitting from fifth to ninth and there are certainly bound to be plenty of twists and turns in the final three rounds of the home and away season. Bottom ager Tyron Hindmarsh had 24 disposals and five tackles for the Falcons and he was well supported by Bailey Chalmers, whose work ethic was superb with 12 tackles to go along with 23 disposals while Jaxon Prior had 22 disposals and nine tackles.

Due to a superior percentage over their rivals, South Fremantle’s destiny remains in their own hands in terms of claiming the hotly contested fifth spot. However, they surely would view this as a major opportunity wasted especially as they have a difficult finish to the season playing top four sides Swan Districts and arch rivals East Fremantle. Mason Ward was a true leader for the home side with 31 disposals and ten tackles while Lachlan Johnson was a lone hand in front of goal with 2.2. 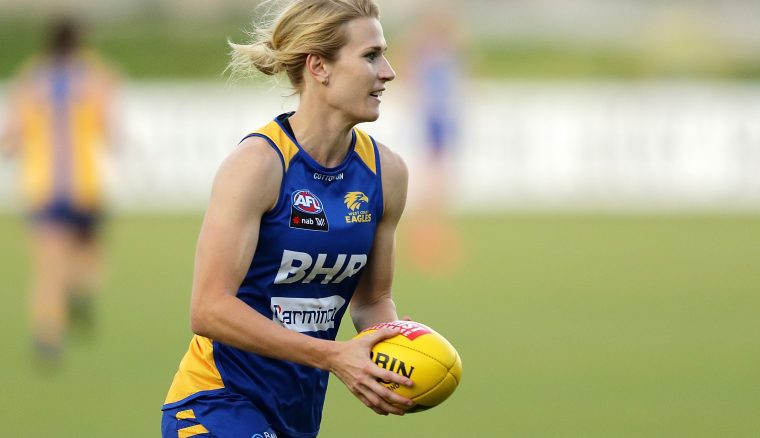