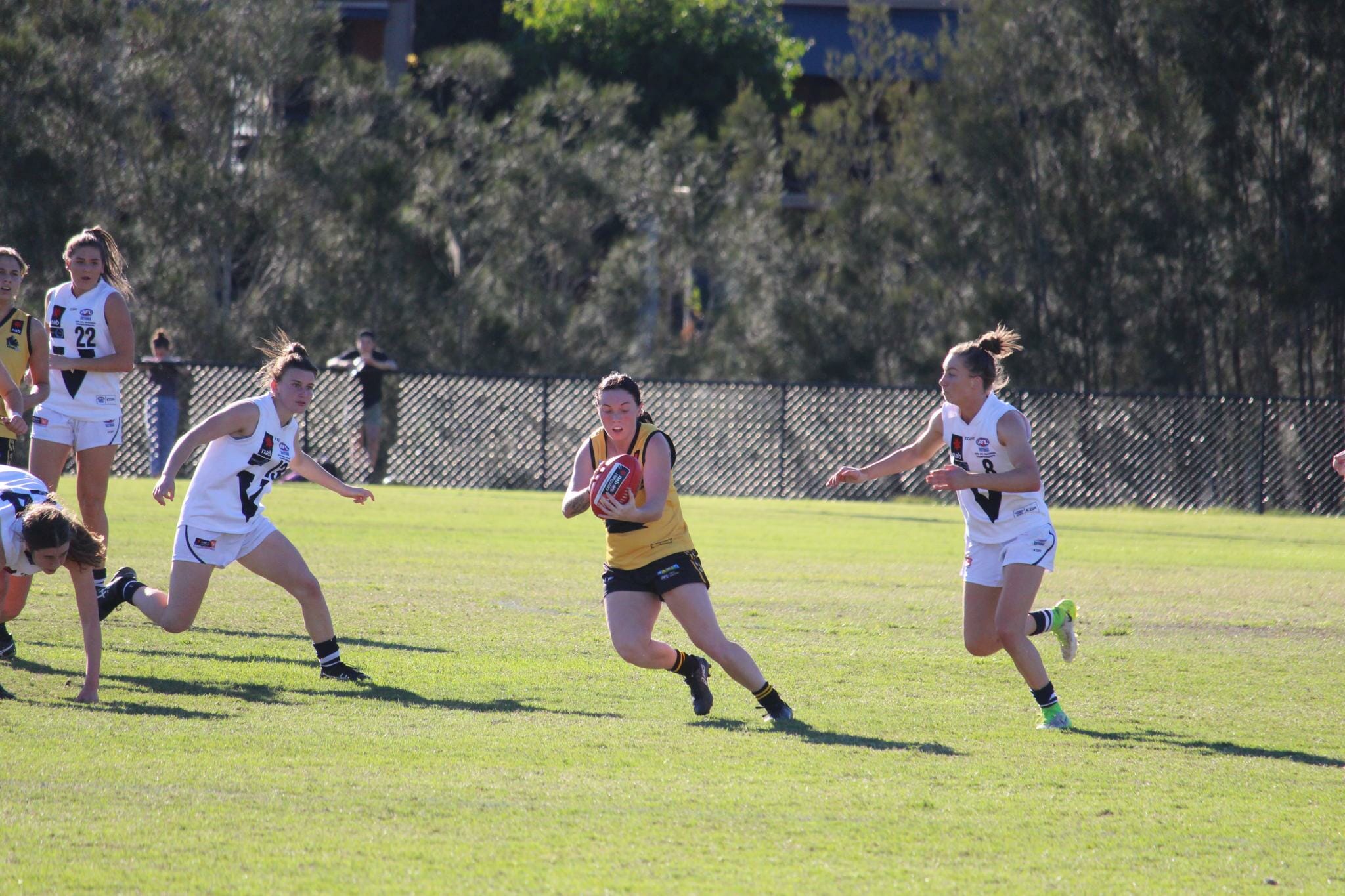 FROM filling in at school to captaining her state, Sabreena Duffy’s football development has been rapid.

After coming from a soccer background, she pulled on the Aussie Rules jumper to make up the numbers for the school footy team. Duffy only needed to play one game of school football to get noticed, receiving an offer that she didn’t see coming.

“I played just for school just because they needed a fill in and then I played one Western Australian Football League (WAFL) game the next week that they found me and I just never went back to soccer. “I just loved it (Aussie Rules).”

Despite the rapid rise in standard, the 18 year-old admits her transition into the elite level was “smooth”, thanks to a couple of friends and a natural gift to play the game.

“I knew a couple of school girls,” Duffy said. “I was naturally good at the sport so I didn’t have to learn how to kick or anything like that so that was a bonus.”

Duffy attributes her natural kicking ability to having a kick with the neighbours in her younger years. Back then, the Western Australian midfielder did not even know there was a pathway available for her in the sport, so she stuck to the round ball game.

“(Playing) with the neighbours down the street, that’s all I knew,” Duffy said. “I didn’t know there was women’s footy, nothing. “I only knew soccer. Mainly with footy, I would just mess around with my best friend.”

Fast forward to 2018 and Duffy’s development in Australian Rules has gone through the roof. The Black Swans midfielder was rewarded for her efforts in the AFL Women’s Under 18 Championships, where she was awarded Western Australia’s Most Valuable Player (MVP). Duffy is aware of the strengths in her game but would also like to make improvements, displaying her determination as a footballer.

“I’m more of a runner and a clearance player I’d say,” she said. “I can hit the scoreboard as well, being a midfielder. “I’m more looking to improve on when I get the ball, I tend to bounce it after three or four steps, just instinct, so I need to just hit the speed and then bounce it after like 14 steps.”

On top of being awarded the state MVP, Duffy was named in the 48-player All Australian squad, and could be on her way to making the final 22 and earning a fifth All Australian accolade. The Western Australia captain says this is a memorable moment in her career, and she is on her way to creating many more.

“I’ve gotten four All Australian jumpers and I’m pretty proud of that,” she said.

The 18 year-old reflected back to the first time she received an All Australian jumper, and admits the emotion got to her on the day.

“It was my first year, Under 16s, and it was my first competition,” Duffy said. “I was just overwhelmed, I wasn’t expecting it and I was just speechless really. “Lucky my mum was there because I was a bit upset, it was cool.”

But for Duffy, captaining her state made her just as privileged, as it was a role she never thought she would be chosen for.

“I’ve played in the team for four years and I could never imagine being a captain, being my last year,” the 18 year-old said. “I was honoured to be able to lead this group.”

Duffy says the playing group was extremely positive, even after losing against Vic Metro in their first match on the Gold Coast.

“The girls are so good, they’re so positive,” the Black Swans skipper said. “We bond so well so it didn’t really hit us. “We thought about it for the period we needed to think about it and then it’s over. “They were so good, no down moments, nothing. “It’s just been really great.”

Like many up and coming players, Duffy has her sights set on AFLW, having finished her Technical And Further Education (TAFE) certificate and looking for a job.

“My next level is really AFLW so hopefully I get drafted and then see where it goes,” Duffy said.

The 18 year-old is well on her way, having been one of three Western Australians to be invited to the AFL Women’s Draft Combine in October.