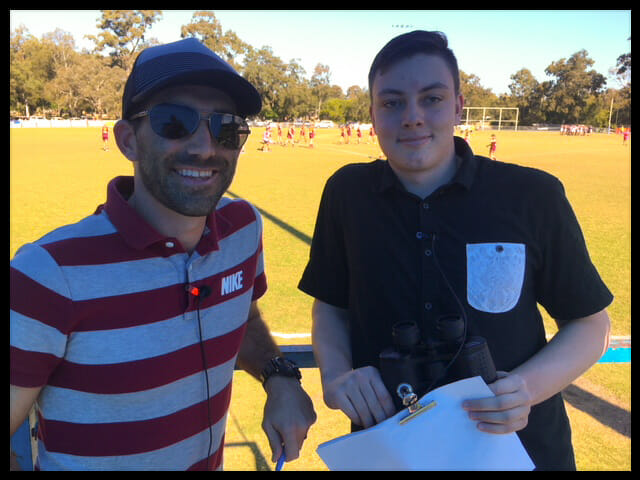 THE rich history of Australian Rules Football extends far below the AFL stars on the television. A heavy sense of pride and reputation exists when the local weekend warriors battle it out in rain, hail or shine on a Saturday afternoon.

But for most of the game’s 150-year history, this reputation and authenticity at the local level has mainly taken a back seat in the dominant AFL states of Victoria, South Australia and Western Australia. It seems now though that Queensland has taken a big step towards stamping its mark on local AFL in Australia.

The Queensland Australian Football League (QAFL) has this year begun to film all games for public viewing online as well as conducting a live streamed game with commentary every round on Facebook during the 2018 season. This extended coverage follows suit with the Victorian Football League (VFL), being the trend setters with live streaming along with radio and televised games for several years now.

Part of this new process is Riley Staraj, one of the appointed commentators to call the live QAFL games this season.

“It’s a product that’s only started this year and it’s a very authentic product bringing our local game to a wider audience and bringing exposure to the QAFL,” Staraj said.

The new coverage of the QAFL also has taken a page out of the North Eastern Australian Football League’s (NEAFL) book. The NEAFL have streamed games online for several years also to show off the talent that exists in the reserve grades of teams such as the Brisbane Lions.

QAFL Competition Manager Christopher Davies said that when discussions were first held in spring last year to undertake the extended coverage, the main goals were based on qualitative, not quantitative results.

“We didn’t set ourselves any goals in terms of numbers it was about whatever we did, we do it properly and that it looked professional,” Davies said.

The principal statistic that measures the reach of the QAFL coverage is that an average of between 1500-2000 people tune in each week to watch the live streamed game. Although this figure does not account for how long people are watching the game, it demonstrates the interest in Queensland AFL.

There have inevitably been challenges for the QAFL taking its first steps in national recognition, in regard to the logistics and technical aspects of the coverage.

“We’ve had our technical challenges to start with in learning the new system that we use to upload our videos and of course unfortunately it wouldn’t stream… Aside from that it’s all been relatively good,” Davies said.

Of course, like any broadcasting team there are the unsung ‘tech’ heroes who virtually put on the show and the same heroes exist in the QAFL coverage. QAFL caller Matt Carroll has nothing but praise for the tech team behind the streaming, making his job very easy.

“All that I do is clip the microphone to my lapel that’s it, the tech guys have done a great job,” Carroll said.

The increased exposure that the streaming of games gives to the QAFL, opens up talent pathways for all those involved. This includes players, coaches, commentators and coaches alike.

For Staraj, it has always been a goal of his to call AFL at the highest level. He strongly believes that calling QAFL games is the best avenue for the foreseeable future, to develop his commentary career.

“This is the best stepping stone you can get because it’s such a niche industry,” Staraj said. “You need practical experience and you can’t get a better opportunity than this, calling the QAFL.”

With more eyes than ever on every QAFL game, the opportunities are there for players aspiring to reach the highest levels. The pathway may now be easier than ever before as a result of the extended coverage of the QAFL.

Mt Gravatt Senior Coach Daniel Webster believes that the streaming of QAFL games is a great tool that might help his players get picked up by the higher leagues around the nation.

“More people actually get to watch the games,” Webster said. “So, if a recruiter or someone from interstate wanted to watch a replay of a player’s game they just need to jump on the AFLQ website. “From that perspective it’s definitely a good tool for recruitment.”

Perhaps the most excited party in all this coverage are the players running around the paddock on Saturday afternoons. All eyes are now on the best of the best club footballers in Queensland for the first time. This offers extra motivation for players looking to impress and move up the AFL ranks.

Mt Gravatt’s very own QAFL senior player James Markham said that with more spectators online, it’s another reason to play better. On the flip side for players are their nerves before they play, and James claims that it plays on the mind on some of his teammates.

“Rhys Estall (Mt Gravatt teammate) gets nervous when a lot of people are watching especially with the games being streamed nowadays,” Markham said.

Furthermore, Markham echoes his coach’s thoughts that the broader coverage of the QAFL will do nothing but help players chasing a football dream.

Looking ahead to the future, the administration at AFL Queensland have plans in place to extend even more the online broadcast of QAFL matches.

“We probably will look to extend the live stream to every game in time. Obviously, there’s a lot of challenges that come with streaming every game live each round along with incorporating more pre-game and post-game content,” Davies said.

To culminate the first season of streaming of matches, the QAFL alongside AFL Queensland will be live streaming all QAFL finals matches. To view QAFL matches head to the QAFL Facebook page and follow the links.