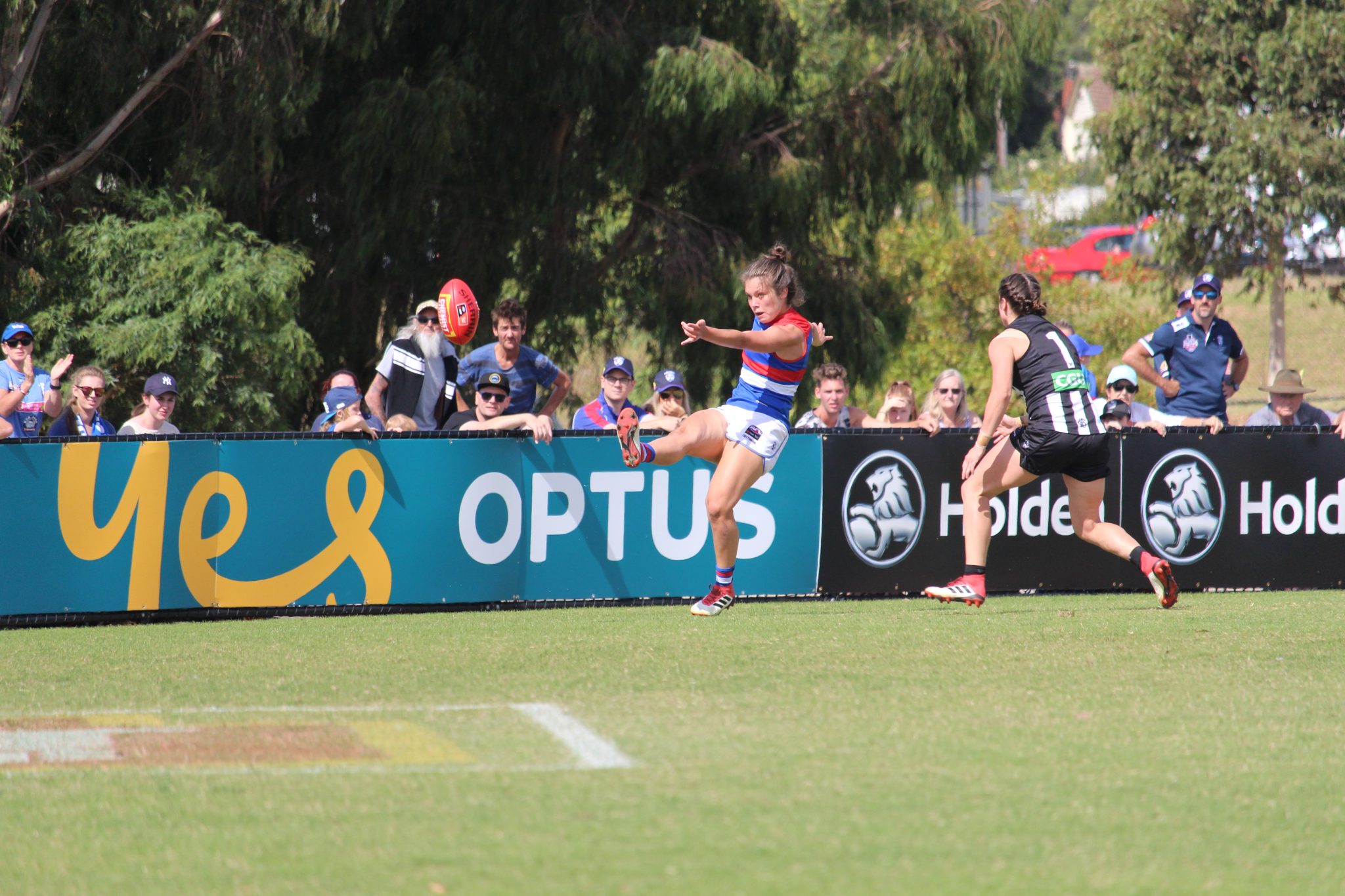 WITH only a month remaining in the home and away season; the competition heats up as teams battle for top four positions and a finals berth. Collingwood, Hawthorn and the NT Thunder appear to have separated themselves from the pack as they sit comfortably in the top three, while Geelong will have a number of teams chasing them for the final position as we head into September action. A very important round of footy ahead.

Despite not registering a win last week, the Demons were extremely impressive against the Thunder, almost pulling off a monumental upset in Darwin. After trailing by 42 points at half-time, the Demons held the Thunder to just three behinds after half-time as well as piling on five goals of their own to create an intriguing final minutes before ultimately falling just short. One of the keys for Melbourne’s AFLW campaign this past summer was Shelley Scott, and she improved how important she was when she made her Victorian Football League (VFL) Women’s debut last week and turned out an impressive 15 touches to go along with two goals. Star Demon, Bianca Jakobsson will also be pivotal in this clash as she continues to be in spectacular form.

Carlton continued its mini resurgence with its second win from three games in a dominant performance over the Tigers. The leading goal kicker in the competition, Darcy Vescio extended her lead with another two goal performance. She was assisted by captain, Kristi Harvey’s two goals as she continues to look damaging. A strong game from defender, Gabriella Pound was also exciting as she had a game-high 27 possessions. Although finals are very unlikely for the Blues, they have shown over the past month that their best footy can match it with anyone.

Williamstown sit only percentage from last-placed Essendon, having registered only one win through the first 10 games. The Seagulls take on an in-form Thunder side, who have routinely recorded big victories over lower-placed teams. Williamstown has had a number of standout individual performances this season, most notably by Jess Duffin who has been unbelievable week in and week out, as well as Jenna Bruton who has really hit her stride of late. But the team is yet to put together an all-round performance, and this will be a key in staying competitive against the Thunder, who have been known for having a number of different contributors and consistent performers each week.

The Thunder as mentioned came out of the blocks on fire against the Demons last week and looked to be on their way to another big victory. They did stagnate in the second half however, only kicking the three behinds, which will be a concern heading into this contest. Another fast start will be crucial as the longer the Seagulls are able to compete with the juggernaut Thunder, the more belief they will get. Angela Foley and Emma Swanson will be key through the middle of the ground this week, especially with Jenna McCormick set to miss the game through injury.

After the men face off at the MCG on Friday night, Geelong’s VFLW side plays host to Richmond at GMHBA stadium. With several teams gunning for the Cats’ position on the ladder, they will need to come out focused and ready in a game they should be able to take care of business and continue to push towards September. After a poor month of footy in June where Geelong lost its only two games for the season, the side has been able to bounce back nicely and return to their form from early season. This has coincided with the return of Richelle Cranston, with the new recruit putting together an unbelievable season for the Cats.

Richmond continues to be disappointing in its campaign, with yet another blowout loss last week at the hands of Carlton. The biggest issue for the Tigers has been the play of their forward line, as they’ve struggled to kick big scores all year. To make matters worse, their number one target up forward, Courtney Wakefield will miss the game with injury. Phoebe Monahan continues to do it all for the Tigers, getting plenty of the ball through the midfield with 20 possessions last week, and helping register the team’s only goal against the Blues. In order to beat Geelong, they’ll need strong performances across the board, however the forward line will be particularly crucial, given the quick scoring ability of the Cats.

Darebin come into the game with six wins and four losses from its 10 encounters and sit just a game and half behind Geelong for fourth place on the ladder. The Falcons take on the third-place Hawks, who continue to play terrific football. The game presents the Falcons an opportunity to truly announce themselves as a contender as well as help close the gap between them and the other top four sides. Lauren Pearce has been fantastic for them in the ruck, setting up their midfield for plenty of clearances in recent weeks, including her AFLW teammate, Elise O’Dea, whose return has been enormous for Darebin.

The Hawks sit in third place on the ladder with only percentage separating themselves and the Thunder, whom they have a game in hand on. As mentioned last week, the Hawks have perhaps the toughest run home of all the teams in the competition and this week will be no different. They come into the game off of a strong last quarter against the Saints, coming back from a goal down at three quarter time to run out nine-point winners. Sarah Perkins returned back into some form last week with a strong game, although she will be hoping for a more accurate day in front of goal, having kicked just one goal to go along with three behinds last week.

The Bulldogs remain the hottest team in the competition, having won their past six encounters. The win streak has put the Dogs right back into contention for a finals berth, with just a game and a half separating them from Geelong. Ellie Blackburn has returned to the line-up in recent weeks and has been in as good of form as she was over the summer in the AFLW season, as well as several other premiership teammates returning to their best. They’ll have to look for their seventh win in a row without her, and continue to offset their poor start which saw them lose their first four games; something which may come back to haunt them.

The Saints will be disappointed they let one slip away last week in their battle against Hawthorn. Leading by four points at three quarter time, the Saints only managed to register four behinds in the last quarter to the Hawks’ three goals, as they ultimately fell victim to a nine-point defeat. The loss puts them at four wins and six losses from 10 games and with finals now unlikely, they must focus on finishing strong and building for season 2019.

One of the best rivalries in all of football is renewed on Sunday afternoon when Essendon and Collingwood meet in the final game of the round. It is a battle between two teams on the opposite ends of the table as the Pies sit atop the ladder, whilst the Bombers sit at the bottom of the table. Despite just the one win, the past month has been a positive one for Essendon, as the Bombers were able to register their inaugural VFLW victory and have remained competitive in recent games. The midfield duo of Maddy Collier and Hayley Bullas has been very beneficial for the Bombers, and have given the team the belief that they can pull off a victory.

Collingwood registered another impressive win last week; topping Melbourne Uni by 19 points. Chloe Molloy starred once again with 23 possessions and her usual efficiency, however she will miss the game this week in what could play a huge factor. The Pies were bolstered last week by the return of Steph Chiocci who played her first game of football since Round 4 of the AFLW season, where she missed the last three games due to suspension and an early season injury setback which forced her to miss the first nine games of the VFLW season. The Magpies forward line will be a challenge for the Bombers, as it has been for most teams all year. Sophie Alexander continues to put up great numbers each week and has been hitting the scoreboard consistently.