Keeping Tabs: Standout performances from Round 19 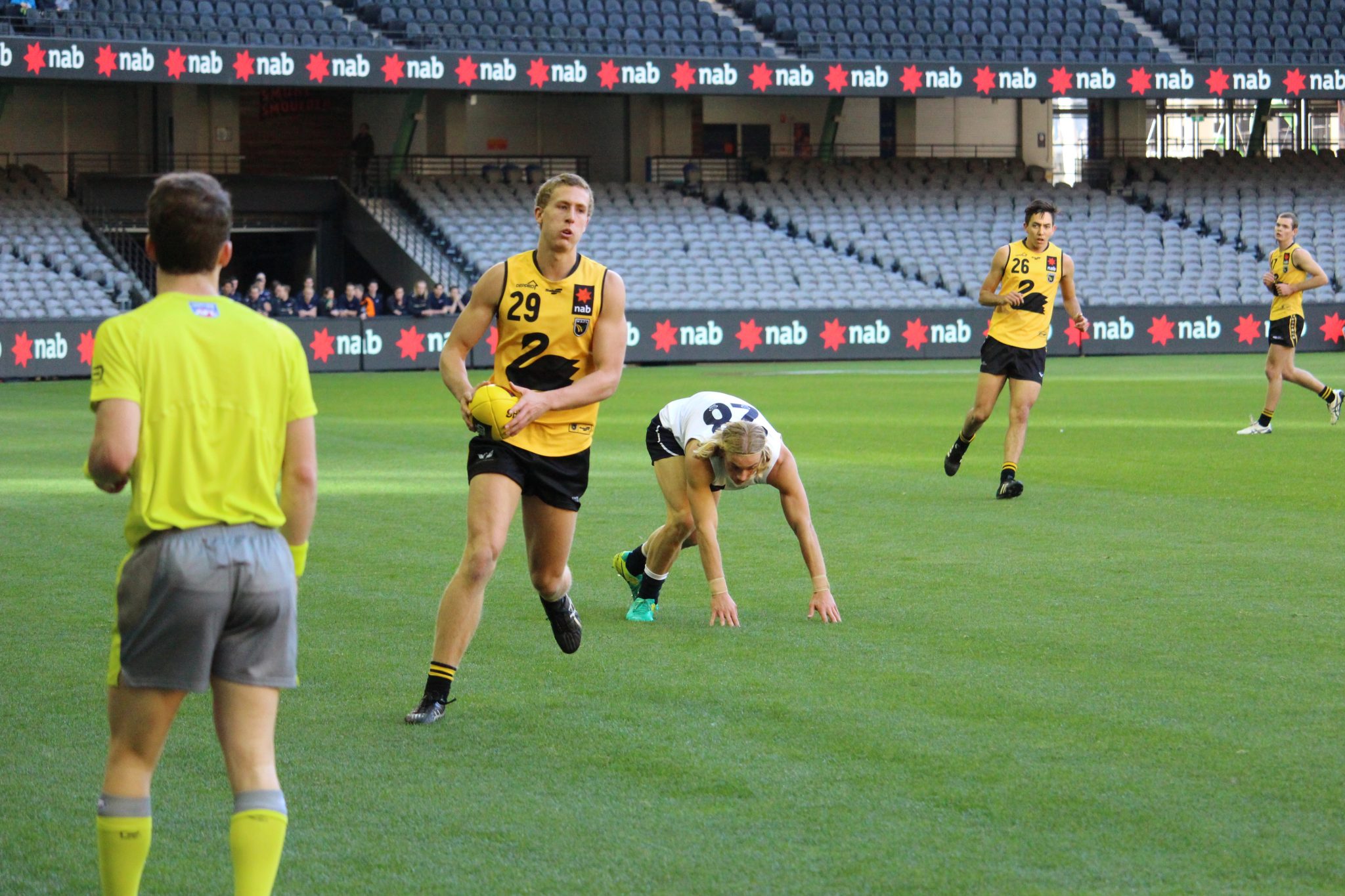 AS the end of the season draws near and the Rising Star conversation heats up, some familiar races return to the Keeping Tabs list after standout performances.

It’s not often a first-year player that kicks arguably the greatest goal ever, but Higgins may have done just that. How a first-year player can earn a spot in the reigning premier’s starting 22 baffles me. Richmond plays a chaotic, but clever brand of football that has seen many of the competition’s great sides break beneath it. On paper, they are the best defensive side in the competition, and second behind Melbourne in attack. At pick 17 in last year’s draft, Higgins has more than stepped up to the challenge. Unselfish with the footy, and instinctive around goal, the young tiger supplied onlookers with yet another standout performance. He finished with 14 contested possessions, recording the highest contested possession rate (70 per cent),  as well as tying first in ground ball gets (12) with Collingwood’s Taylor Adams. Though usually a great assist up forward, Higgins was able to finish with two for the match. Driven by pure instincts, the Tigers have secured a future star in Higgins for both his gifts with a microphone and hunger on the pitch. Despite his lengthier period on the bench, Higgins still managed to tie second in pressure acts (22) with skipper Trent Cotchin. The rest of his stat sheet is just as impressive at five clearances, five intercept possessions without a turnover. Surely a game to remember, for the record 19 wins at the MCG and possibly the most replayed goal we are ever going to see.

The footy gods offered young Dow an opportunity to hit his strides this weekend, giving Carlton a rare showing of dominance over the Gold Coast Suns. With one of his two goals nominated for goal of week, the pacy midfielder proved too good on the board despite spending 86 per cent of his time in Carlton’s defensive half. Rip out the stat sheet and Dow’s impact becomes even more evident. Recording 18 disposals and 11 contested possessions at a 78 per cent disposal efficiency, Dow remained vital around stoppages with three clearances and four tackles. His pressure acts topped off at 17 and he gained 314 metres for the day. Though unlikely to be in Rising Star conversations, Dow is showing steady growth despite Carlton’s poor season. Hopefully 2019 will allow the young midfielder more room to perform with a better built Carlton side.

Coming off a groin injury sustained against Melbourne, Brayshaw’s comeback brought one of his best performances for the season. Despite the poor result, Fremantle’s young stars stepped up to challenge, with the Dockers’ number two pick leading the charge. Brayshaw finished with 25 disposals and nine contested possessions. Despite an average disposal efficiency of 64 percent, Brayshaw made his impact obvious finishing with four tackles, two clearances, two rebound 50s, 19 pressure acts and three free kicks. Finding himself on the scoreboard, the number two pick finished with a goal and six score involvements, having a hand in many of Fremantle’s link ups.  It’s evident Fremantle are doing well with their debutantes, bringing in the next generation’s champions. These boys could be highly decorated players in a few years if developed right, and could make history with Fremantle’s first premiership. The sky’s the limit.

Though intended to play up forward, it seems Naughton’s work in the backline was too good to pass up. Recording 20 disposals and 13 contested possessions, Naughton suffered a beating from Port’s persistent forward line. Despite the onslaught, the youngster managed an outstanding 15 intercept possessions and two contested marks. He won all three of his defensive one on ones and recorded a contested possession rate of 68.4 per cent. He recorded high intercept numbers, Naughton still turned the ball over six times. Unfortunately for the youngster, it seemed he was fighting a losing battle from the second quarter, but he would not let this stop him. He kept his stat sheet more than impressive, recording four tackles, three inside 50s, four rebound 50s, three free kicks and four one percenters. With the Bulldogs at full strength, we hope to see Naughton cement himself in a position and properly improve on his development.

Fremantle’s resident tagger, Banfield was given the greatest challenge of his career in having to minimise the impact of Hawthorn’s, Tom Mitchell. A success? Not quite. Mitchell went on to deliver a 42-disposal game with two goals, but Banfield had an impact of his own despite the challenging task. Stepping up around the stoppage, Banfield picked up five clearances. His superb pressure continued with six tackles and 25 pressure acts, with 19 disposals and eight contested.  A disposal efficiency of 58 per cent let him down at times, but considering his tagging role, Banfield saw a decent amount of the footy. At 20 years-old, Banfield has already been entrusted with one of the biggest individual responsibilities in tagging the opposition’s best. Considering his experience, he is doing okay.

Taylor had yet another solid game in GWS’s backline against St. Kilda. The Saints played some strong footy up until the final quarter, so Taylor had his works cut out for him. He collected 10 disposals and five contested with a 90 per cent disposal efficiency. He brought clean hands to everything, picking up five intercept possessions (zero turnovers) and three marks. He laid five tackles, recorded one rebound 50, 10 pressure acts and five spoils. He has no problem attacking the football and makes the most of his possessions. His presence around the contest is evident enough from his stats, playing close to his man and applying intense pressure. Taylor is developing nicely in the GWS backline in his seven games. We could be looking at a future All-Australian backman in the making.

Coffield found his way back into St. Kilda’s side in their match against the Giants. Though lower than usual for the clean defender, Coffield still managed a 71 per cent disposal efficiency from his 14 disposals. He picked up four intercept possessions and won both his contested defensive one on ones. He is undoubtedly one of the cleanest first-year players, and determined not to turn it over. He recorded three rebound 50s, eight pressure acts and four marks (one contested). Coffield also saw his way up the ground where he recorded two inside 50s and two score involvements. He also impressively turned GWS great, Josh Kelly, inside out after thwarting his tackle on Saint’s defensive 50. Coffield is too clean to be played anywhere else for the Saints. His effectiveness with the footy is invaluable and hopefully will be utilised more in the future.