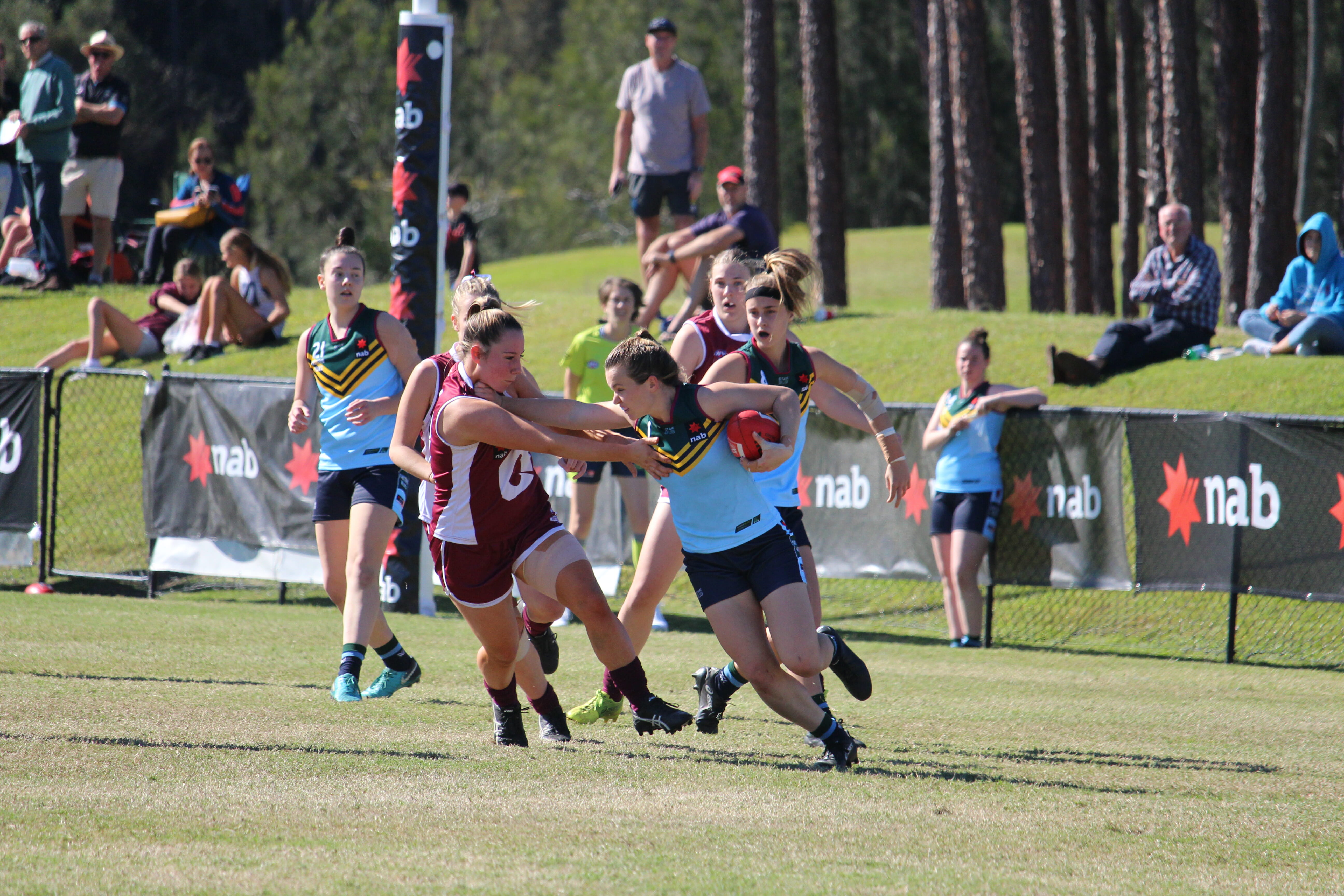 FAMILY, footy and farming are the three Fs that have been the key pillars in country girl Alyce Parker‘s life. Now 18, Parker is in her final year of junior football and months away from the 2018 AFL Women’s Draft, but she has not forgotten the importance of the other two Fs.

“I live on a farm, and being on a farm with dad and mum and my two sisters since I could walk and I absolutely loved getting out on the farm and just doing everything I can,” Parker said. “It’s a huge part of not only my football career, but my life in general. “There’s football, there’s school, but then there’s the farm and I’ll be there every chance I get out on the farm.”

Parker is thankful for all the opportunities that have come along on her football journey, something that started by chance at school.

“I come from a farming family, we’re very much involved with footy and learnt to kick basically when I was walking,” Parker said. “So I always had a footy in my hand, but actually in my first game wasn’t until I was 12 with the school boys team. “The PE (Physical Education) teacher asked if I wanted a game. “I’d never played, I actually didn’t even know the rules but I had a left foot he noticed that, so that was where it all started. “Lucky for me I came in at a really prime time, as soon as I moved into Year 7 in high school the Youth Girls pathway just developed and I never had to stop, I was so lucky coming in that wave where the pathway is completely exploded and I had opportunities coming everywhere.”

Parker said both herself and all the other girls across Australia have the Youth Girls programs to thank for the rise of female football.

“It’s a huge gate opener to a career in AFL which in the last 12 months because of these programs,” Parker said. “I’ve developed and I have a huge passion for AFL now, and that’s purely for those pathways and without them I probably wouldn’t be sitting here talking today, so they’re the reason why so many girls, especially the younger age girls are playing AFL, and definitely in the coming years the reason why the game is just going to improve in every way.”

The talented midfielder said she noticed the difference in New South Wales (NSW) football and the fact that many younger girls saw Australian Rules as a viable option over rugby in the state.

“Yeah definitely, I come from southern New South Wales and even in Wagga, it’s very much rugby orientated, but now I’m training in Wagga a lot with AFL and see huge improvement in the population of girls playing AFL,” Parker said. “Coming from Albury, it’s (football) always been there, but in the last couple of years it’s just exploded and there’s so many new faces, but also there’s girls that just have this raw talent and they’re definitely going places and it’s amazing to be a part of.”

Living in rural NSW has made travelling to training and games challenging for Parker and her family, but it is something she has become accustomed to, and would not have it any other way.

“In a way it is disadvantaged living in rural NSW but at the same time, I’m only an hour or 50 minutes away from Wagga and an hour away from Albury, so in a way it’s no trouble at all,” Parker said. “Compared to girls who live five minutes around from the their training ground, but for me and my family we’re used to it, and we’re very lucky to have access to those two major growing talents of football in Albury and Wagga.”

Speaking of her family, Parker said she could not be more grateful of the sacrifices they have made for her football and life in general.

“Having them apart of my journey is obviously incredibly special to me, but also them too,” Parker said. “Mum and Dad are my number one supporters and the reason why I’ve achieved so much in my short career in a way. “Now that I have my Ps I can actually go to training myself, but they’ve been there since day one and the reason I’ve developed into the person I have and achieved the success in football, but also in other sports too.”

Having represented the Eastern Allies at the recent AFL Women’s Under 18 Championships, Parker enjoyed having the experience of bonding with new Tasmanian teammates and running out alongside them all within a few days of the first meeting.

“Yeah it definitely does add challenges,” Parker said. “We basically met on Saturday night having played against each other a couple of weeks ago, but for me that’s exciting having a few girls that I’ve never played with, but you know you can trust them and it just makes the last three days, you get to know them so quickly. “For the girls that I’ve known for years, in a way I’ve caught up with the girls I don’t know, because in a way we’re sort of, not forced but definitely have to, we don’t have a choice we’re playing together in two days, so we get to know each other as much as we can and we just know that we can trust each other and they’ll be there playing in the same guernsey.”

Having collected back-to-back Most Valuable Player (MVP) awards for NSW/ACT and Eastern Allies, Parker is not resting on her laurels, believing there is still much improvement in her game, and she has benefited under the tutelage of GWS GIANTS’ star Alicia Eva, who coached both her state sides at the two series.

“I have been working on a couple of things this year,” she said. “Particularly under the coaching of Alicia and the help and support she’s given me. “Having an opportunity in the winter series to play against some bigger bodies and in a way the AFLW players has definitely helped me. “It’s a very different contrast between Youth Girls and the AFL, so little things like, you only have one chance really when you’re up against the big bodies you don’t have much time so there’s quick decisions are something I’m working on.”

Parker has also been able to represent the Southern GIANTS in the Women’s Winter Series, giving her vital experience against bigger bodies having returned to compete against teenagers.

“Yeah definitely (it has helped),” Parker said. “I’ve noticed a huge difference a couple of weeks ago playing against Brisbane Lions obviously a very tough game, the scoreline wasn’t pretty. “But that experience against the likes of Sabrina (Frederick-Traub) and those amazing girls, then coming back to this level. “It’s not easier, but it’s definitely different and I feel it’s definitely improved my football in the last couple of weeks just coming a step down to those smaller bodies and having that experience against the bigger bodies, you can beat those younger ones.”

While her AFL Women’s dream could be just a couple of months away now, Parker is still balancing all of her passions.

“Being a family farm, I’m very much involved in it,” Parker said. “But I also have my AFL career so I’ll see where that takes me, but I’m very much involved in agriculture, and very interested by it. “But at the same time I’m interested by my sport and exercise too, so it will pan out and see what interests me the most. “But at the moment my focus will be on AFL in the coming months.”