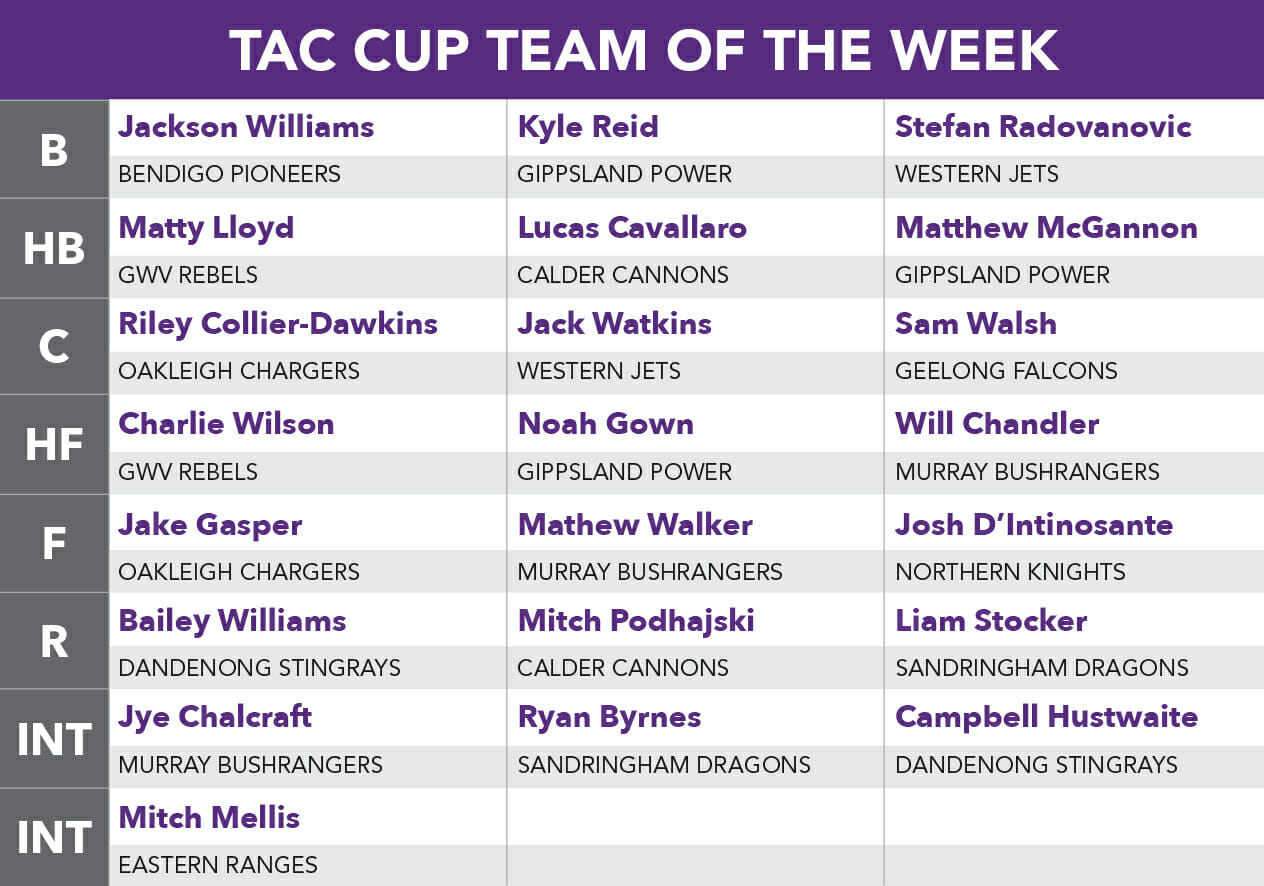 IN the Round 13 AFL Draft Central TAC Cup Team of the Week, some creative liberties must be taken on a team where it was hard to fit so many like-minded players into the side. So many medium forwards and defenders impressed that we opted with a smaller back and front six. Bailey Williams who played up forward goes into the ruck in this hypothetical team in order to squeeze the extra medium forward in, while the bench is filled with quite a few midfielders who stood out as well.

Gippsland Power and Murray Bushrangers had the most nominations for Round 13 with three apiece, whilst the four other winners, as well as Calder Cannons and Western Jets, had two nominees each. Bendigo Pioneers, Eastern Ranges, Geelong Falcons and Northern Knights all had the one player make the Team of the Week this round.

Backing up their efforts last week, key forward Noah Gown and half-back Matthew McGannon return to the side, as does key defender Kyle Reid who has featured in the team on a number of occasions. Their opponents on the day, the Northern Knights, had the one player in the side with bottom-age small forward Josh D’Intinosante squeezing into the forward pocket. Lachlan Potter was considered unlucky not to make the team and would be a hypothetical emergency for the side.

Murray Bushrangers also had three players who all have smart forward craft make the team. Mathew Walker lines up at full-forward after a six-goal haul, while Will Chandler‘s three goals, and Jye Chalcraft‘s work in transition was enough to see them all make the team. Their opponents Western Jets had two players in the side, with midfielder Jack Watkins and defender Stefan Radovanovic both starting in the team. Calder Cannons were the other side that had two nominees despite their loss, with co-captain Mitch Podhajski making the team yet again, as did defender Lucas Cavallaro who steps up to play a key position role in defence.

Dandenong Stingrays had two players make the side from their victory over the Cannons, with Williams starting ruck, and captain Campbell Hustwaite returning to the side after yet another strong performance. Finlay Bayne was one who was a hypothetical emergency, just missing out on the best 22 for this round. Greater Western Victoria (GWV) Rebels big win over Eastern Ranges saw the ever-consistent forward Charlie Wilson make the side, as well as half-back Matty Lloyd who picked up 37 disposals. Eastern Ranges’ bottom-age midfielder Mitch Mellis was one of the Ranges top players on the day and made the best 22 for the round again.

Oakleigh Chargers enjoyed a big win over the Geelong Falcons, with Riley Collier-Dawkins among the best, while Jake Gasper‘s outstanding form continued pushing up the ground and still booting three goals. Falcons star and co-captain Sam Walsh was his usual consistent self and made the team again. Sandringham Dragons had two players make the side after their win over Bendigo Pioneers, with Liam Stocker starring through the midfield yet again, and Ryan Byrnes impressive as well. Bendigo defender Jackson Williams makes his debut in the side after standing out in defence with eight rebounds. Dragons key forward James Rendell was the third hypothetical emergency in the team.